“Aggies and Eagles together,” Johnson remarked. “The quiet before the storm.”

The Aggies and Eagles played later at Bank of America Stadium, and North Carolina Central of Durham beat North Carolina A&T of Greensboro, 28-13—the Eagles’ first victory over their historic rivals since 2016. The contest was only part of the storm that Johnson, an assistant professor of history and director of the public history program at Central, was talking about. This was the 100th anniversary of the first game, a 26-0 A&T victory over what was then called the National Training School. (The legislature didn’t designate it N.C. Central until 1969.) If you keep track of such things, the Central win Saturday night came in the 94th game of a series that A&T, the older institution, still leads: 54 victories for A&T, 35 now for Central, five ties.

Over that century, two universities separated by only 55 miles—schools whose alumni and fan bases know each other from high school, or the neighborhood, or from their own houses—have created a particular kind of rivalry. “The institutions are very close,” Johnson told me a few weeks ago. “When I listen to people who come to visit the rivalry from other places, one of the things that they know is the propinquity between Aggies and Eagles. We tailgate together, we are married to each other. There’s a great affinity between the institutions … up until game day. And then everything really changes.”

You could say that about a lot of in-state college football rivalries, especially in the South. But the Aggie-Eagle Classic is singular, a sports cornerstone for Historically Black Colleges and Universities (HBCUs), for its history and for what it might signal in the present. A few years ago, Johnson teamed with a counterpart of his at A&T, Dr. Arwin Smallwood—a historian who earned bachelor’s and master’s degrees from Central—to research the rivalry. Their project yielded, among other things, the discovery that the first game was in 1922, not 1924, as both institutions had assumed.

Exhibits at history museums in Greensboro and Durham followed, and they expect their book, NCA&T vs. NCCU: More Than Just a Game, to be published early next year. The crowd Johnson greeted Saturday morning at the Brooklyn Collective in Second Ward was there for a presentation by the two historians. “The black community in Greensboro is A&T. You can’t separate them,” Smallwood told the audience. “The same is true for Durham and Central.”

So what was everyone doing in Charlotte? The teams had played here three times before—but all at Memorial Stadium, the last time in 2008. This year, it wasn’t just the two universities and their fan bases that treated the Aggie-Eagle Classic as a big deal. The biggest city in the Carolinas did, too. 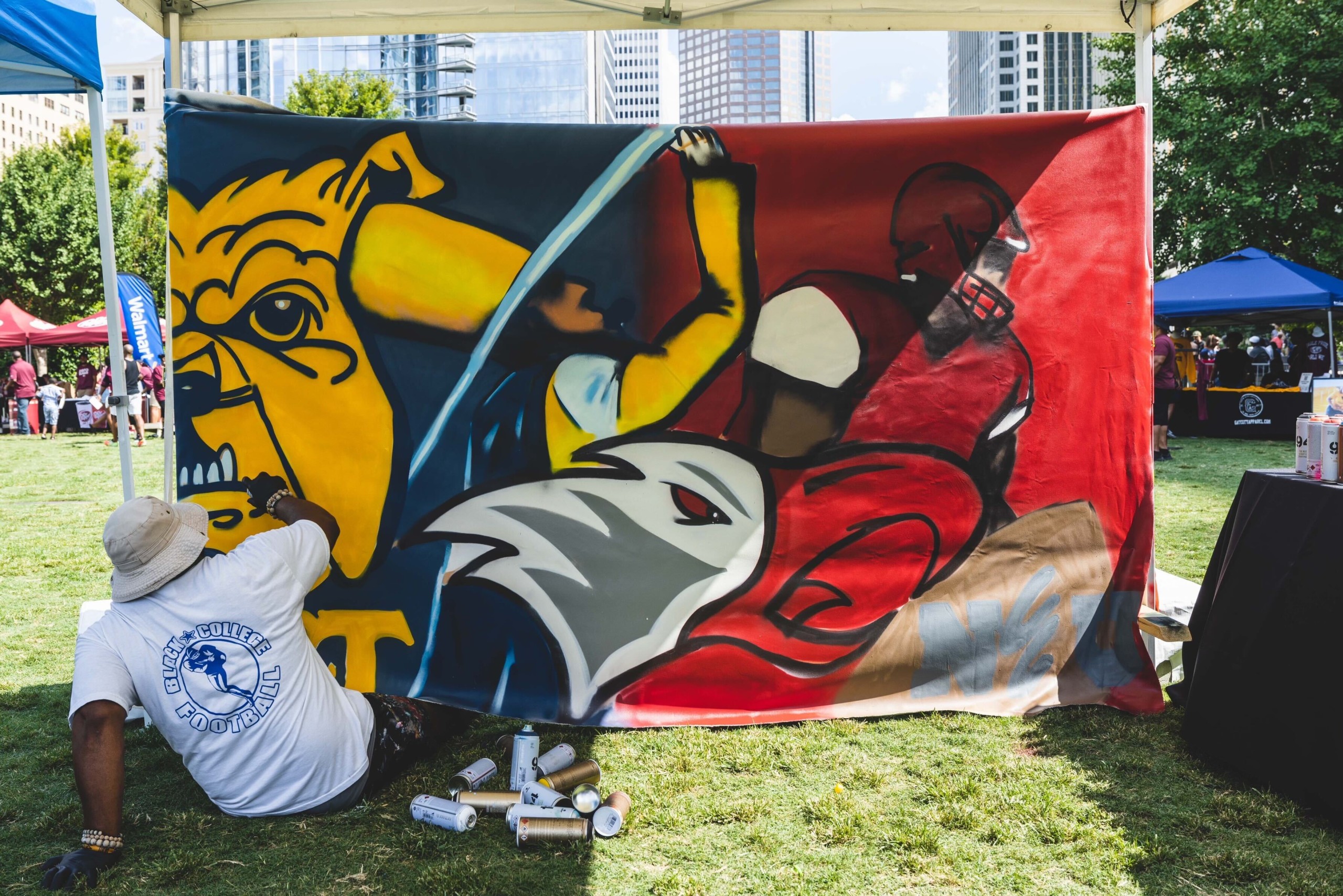 The planning started last summer. Danny Morrison, executive director of the Charlotte Sports Foundation and former Carolinas Panthers president, began to hear from representatives of both schools about interest in a season-opening Aggie-Eagle Classic at Bank of America Stadium. The foundation is the sports events nonprofit that hosts the annual Duke’s Mayo Classic to kick off the college football season—you’ll recall the Georgia-Clemson game last year—plus the Duke’s Mayo Bowl and ACC Championship Game.

Morrison knew leaders of another nonprofit, 100 Black Men of Greater Charlotte, which mentors and provides educational opportunities for young Black men; they included Aaron Means, its current president, and Brian Willis, its former president and chair of special events. They talked about not just hosting the Aggies and Eagles for the 2022 Duke’s Mayo Classic but turning the event into a multi-day celebration of the rivalry—with chances for students of both schools and K-12 students to make connections with potential employers and college reps. 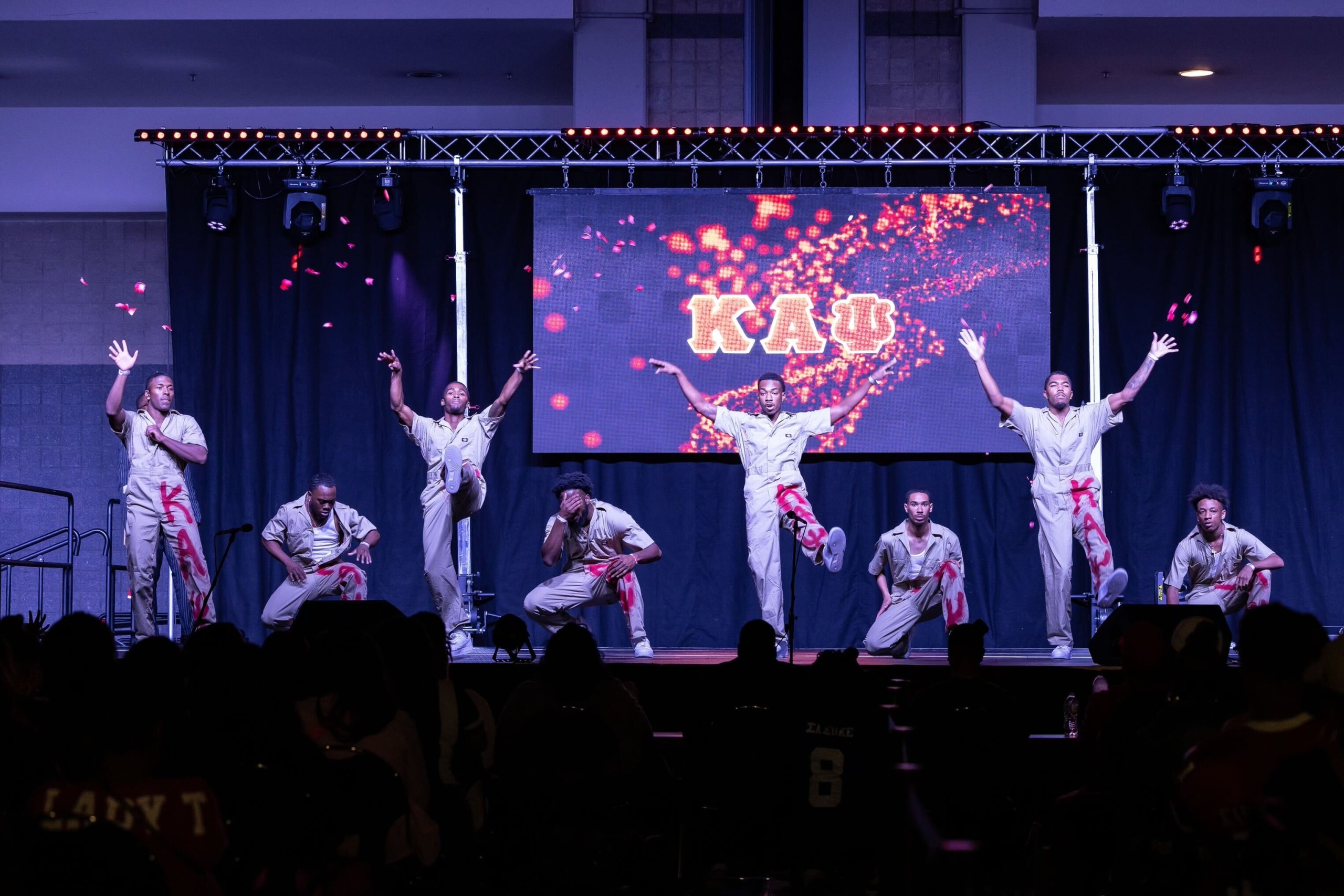 “Our motto for the 100 is, ‘What they see is what they could be.’ So our whole job is to provide for these young kids, and be examples, and give them exposure, and let them see,” Willis said a few weeks before kickoff. “Everything we do is about giving opportunity and hope to these kids. We’re trying to light the spark for everybody.” He chuckled. “We don’t know which coal is going to light up first, though.”

As big a success as last year’s Georgia-Clemson game was—with the eventual national champion against a perennial contender, national profile, and College GameDay at Romare Bearden Park—the organizers of this year’s Central-A&T game wanted the event to encompass more than just football and the spending of tourism dollars. “We asked ourselves, ‘What makes HBCU football special?” said Miller Yoho, the CSF’s director of communications and marketing.

When the effort began in earnest in January, the organizers outlined plans to bring the teams in early in the week; have them tour and eat dinner at 23XI Racing, Michael Jordan’s NASCAR headquarters in Mooresville; host a college and career fair at the Charlotte Convention Center on Friday morning and a step show there in the evening; a 10K run Saturday morning; a Fan Fest at Bearden Park during the day Saturday; and a marching band competition after the game. “We knew,” Yoho said, “that halftime wasn’t going to be long enough.” 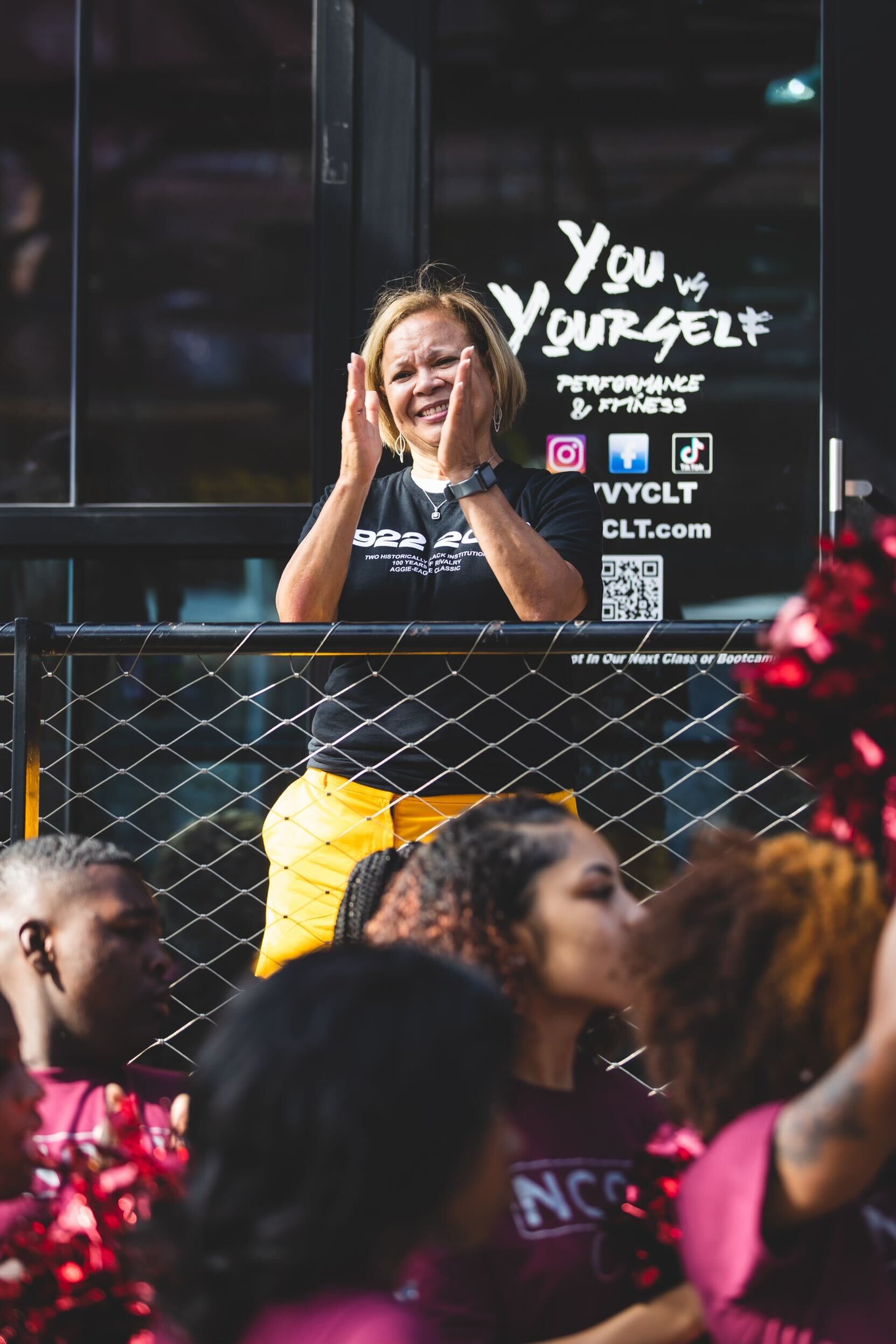 Of course, tourism was part of the package, too. The game drew a respectable 35,798, just less than half BofA’s capacity. Restaurants were visited, hotel rooms reserved. Arthur Brown, who played offensive guard and tackle for A&T from 1969-72, came in from Atlanta, where he owns a business marketing and economic development consulting business. “I knew both schools had a large alumni base,” said Brown, 70, “and what it does is give attendees from all over North Carolina a chance to come to the game.”

As a former player and alum, he prefers the game to be played on campus, either in Greensboro or Durham. But for a special occasion like the 100th anniversary, he understands the benefit of playing in an NFL stadium in a bigger city. “In my opinion, it’s good will,” he said. “From an economic development standpoint, what it’s doing is spreading the wealth.”

This seems like a good time to acknowledge: Morrison, Yoho, and numerous others who helped plan and execute the event are white. The Aggie-Eagle Classic, though it does not exclude white people, is the cultural product, top to bottom, of Black people. Discussions of “inclusion” have risen to a prominent place in American society, especially since George Floyd. What’s it mean? What’s it look like?

One version might look like this: An organization of mostly white people and one of Black people joining forces to celebrate and fortify the Aggie-Eagle Classic. Or what you could see if you hung around long enough at the Brooklyn Collective after the Johnson-Smallwood presentation: Morrison, a white-haired white man in his 60s, the former president of an NFL team, helping put away the folding chairs.

Brian Willis of 100 Black Men was hanging around, too. When I interviewed him in July, he said he acknowledged that the upcoming weekend could easily be just the hosting of the game, and that the Sports Foundation easily could have handled it by itself, or gone with another high-profile game like Georgia-Clemson or the North Carolina-South Carolina game planned for next year’s Duke’s Mayo Classic. “That’s where I appreciate the Sports Foundation bringing in the 100,” Willis said then. “Because we understand the culture.”

Saturday morning, in a former church building even older than the A&T-Central rivalry, Willis couldn’t wait for the rest of the day to unfold. “The city’s on fire, man,” he said. “Everybody cares.” 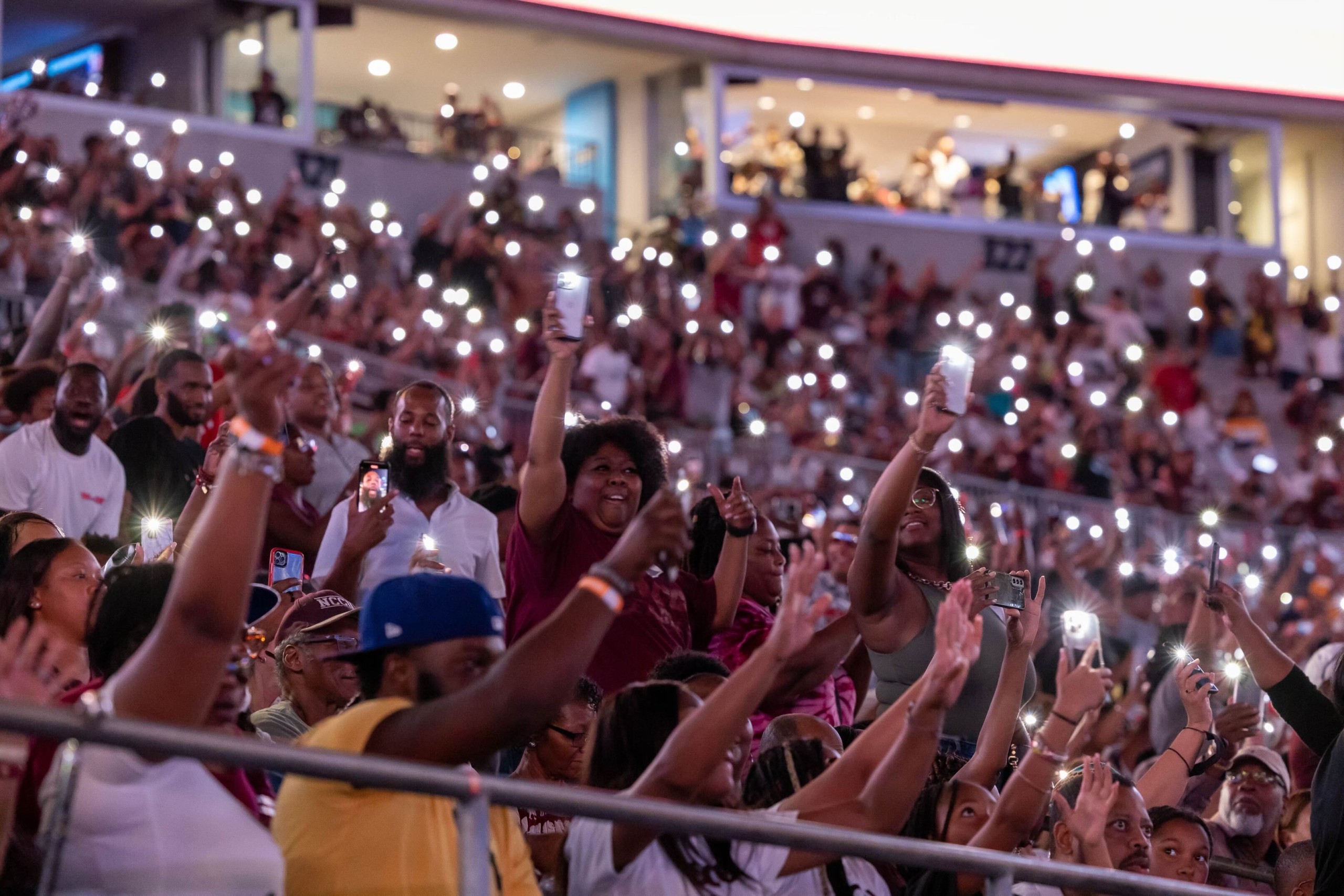