At midday on Feb. 26, 2004, snow began to fall in the Charlotte region. It snowed throughout the day, stopped, then picked up again overnight. When it was over, 13.2 inches had fallen at the airport, even more elsewhere—the third-largest snowfall in the city’s history. Work and school were canceled, an anomaly in the pre-COVID era. Drivers bottomed out their cars. The city had to use its four snowplows to try to clear roads throughout the city. It was a mess. Brad Panovich loved every second of it.

“I had been in New Orleans for four years, and I hadn’t seen winter weather for a while. … and I’m like, This is great,” says Panovich, the chief meteorologist at WCNC-TV. “I wanted to get to a four-season climate. We were back to winter weather.”

We’re at WCNC’s offices off Billy Graham Parkway a week before Thanksgiving, which has turned out to be a good time to talk about large, historic snowfalls—and their absence. Panovich has just finished his winter weather forecast for the region, a popular annual feature. He’s also watching closely as forecasters predict a massive snowfall in western New York. (More than 6 feet will fall in some areas around Buffalo.)

Panovich grew up in Akron, Ohio, and knows all about “lake effect” snow coming off Lake Erie. As we talk in a corner of the studio, where he keeps his computers and monitors, friends of his in upstate New York are already sending photos. “I’m getting geeked up watching all these pictures coming in,” he says as he scans through them. “Because that, to me, as a meteorologist but also as a snow lover, is awesome.”

He appreciates it more now that he realizes that, with each passing year, the chances of snowfall in Charlotte diminish along with the snow itself. Meteorologists have tracked weather data since the late 19th century, and the overall long-term pattern, beginning in 1879, shows a gradual but steady year-by-year decline in annual Charlotte-area snowfall and a similar rise in the number of winter days when the high temperature is 70 degrees or more. A decade ago, boosted by the February 2004 event, Charlotte averaged 4.3 inches of snow per year. It’s now 3.5, and Panovich expects it to keep dropping.

The decline is a product and stark indicator of climate change, and it’s a more complex matter than just an overall rise in temperature. For people with fond memories of snow days in Charlotte, and for transplanted Northerners who still crave the occasional taste of winter weather, it’s also cause for dismay. Panovich, who moved to Charlotte to work at WCNC in late 2002, says he began to sense around 2010 that the snow and ice storms he delighted in at first were, in a sense, false advertising: “I’m like, Uh, what’s going on here?”

He demonstrates. Panovich pulls up a digital map of the United States, what you’re accustomed to seeing on TV during national forecasts. On the monitor screen, a line of blue arrows that look like paper airplanes swoops down from western Canada through the Midwest; begins to curl north again in Tennessee, grazing Charlotte; then shoots northeast into New York. Below it, a similar line of orange paper airplanes treks eastward along the Gulf Coast. The blue line is the polar jet stream, cold and dry. The orange line is the subtropical jet stream, warm and wet. 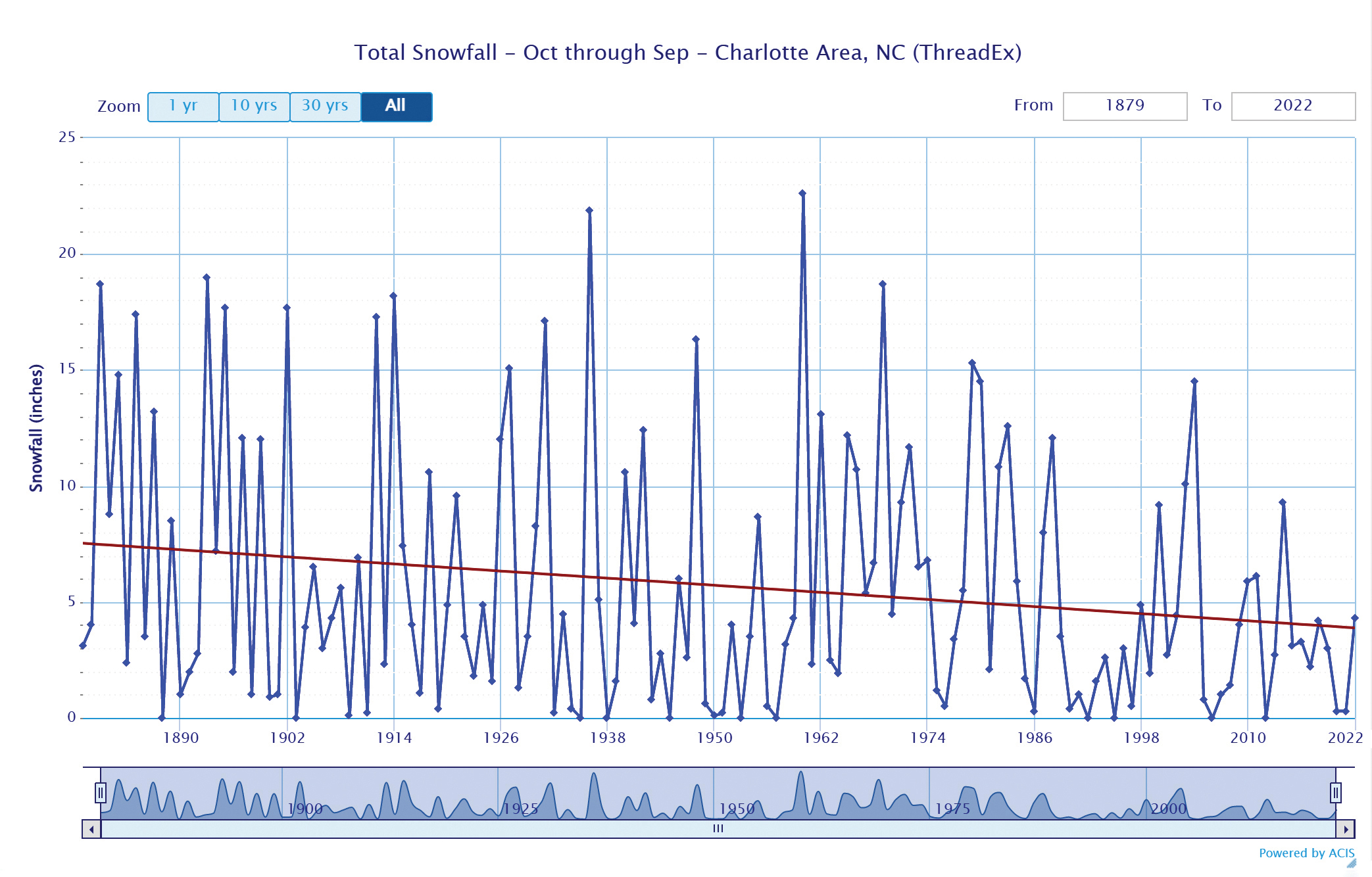 More than a century of data in Charlotte show a gradual overall decline in snowfall (above) and rise in the number of winter days with high temperatures of 70 or above (below). Courtesy Brad Panovich. 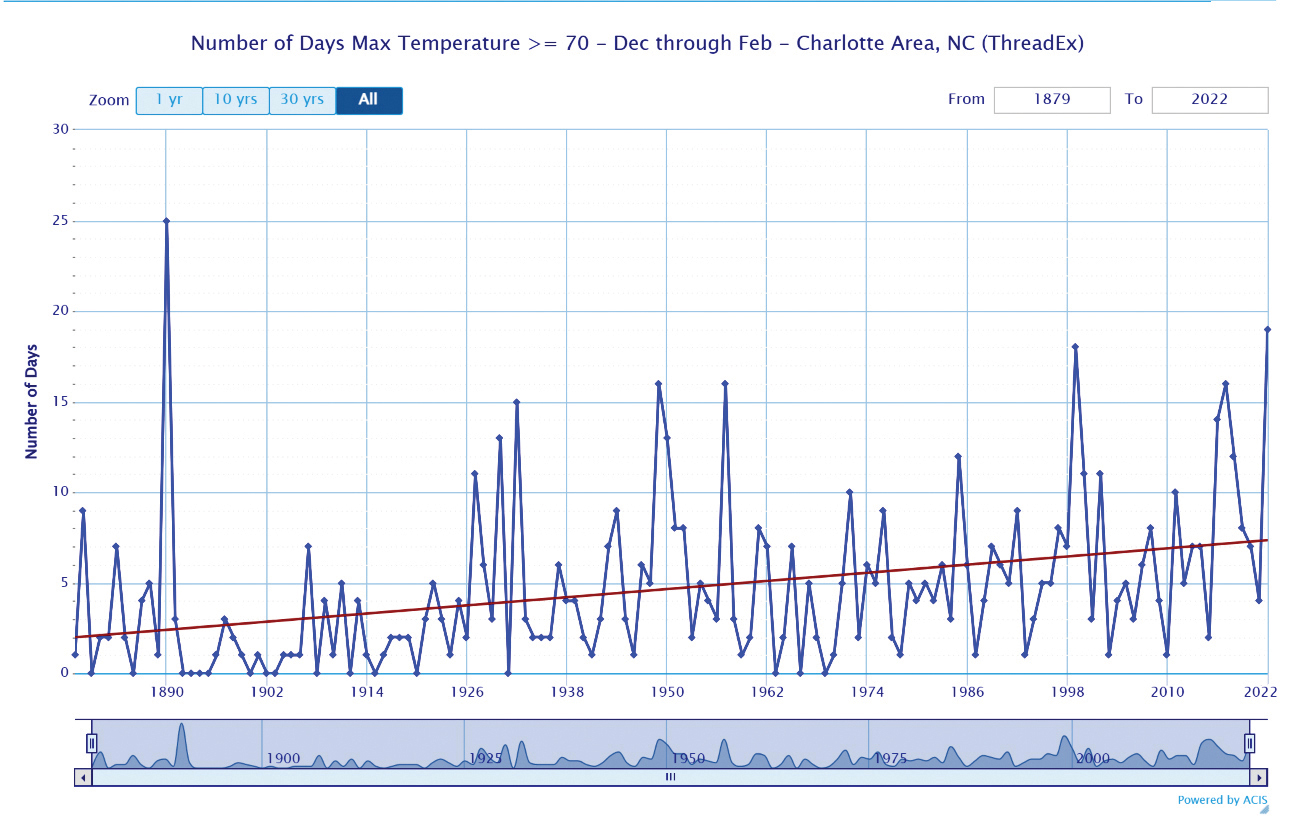 “The best setup for us for winter weather—we want that southern jet stream there, which is the main storm track, and the cold air, which is the polar jet, would be right there,” he explains. “And this would set up your typical kind of nor’easter Carolina low pressure where it’s wrapping cold air, and it’s all snow inland over the Piedmont. That’s the old I-85 corridor, snow from Atlanta up through the upstate (South Carolina), and it goes all the way up into Virginia. That’s your best setup for big snows here.”

But since the early-to-mid-2000s, he says, melting Arctic ice has “amplified” the jet streams. A warmer Arctic has shrunk the temperature difference between itself and the equator, which makes the west-to-east jet streams meander farther north and south, like slow-moving rivers. That, paradoxically, can allow cold air farther south than normal, as in the devastating Texas ice storm of February 2021. It can also make warm air rise farther north. In December 2021, temperatures in Alaska soared into the upper 60s.

Now, Panovich says, the prime area for snow, where cold and dry meets warm and wet, “is either up here”—he points to the Great Lakes, then the Gulf of Mexico—“or it comes down here. It’s rarely here”—the midway point, i.e., us—“because the jet stream is so amplified. … It’s really when the Arctic sea ice started retreating and wasn’t coming back in the winter.” Nowadays, meteorologists informally refer to “crazy” or even, he says with a chuckle, “kinky” jet streams. The variances are “not these little subtle things. It’s gigantic ridges and huge troughs.” 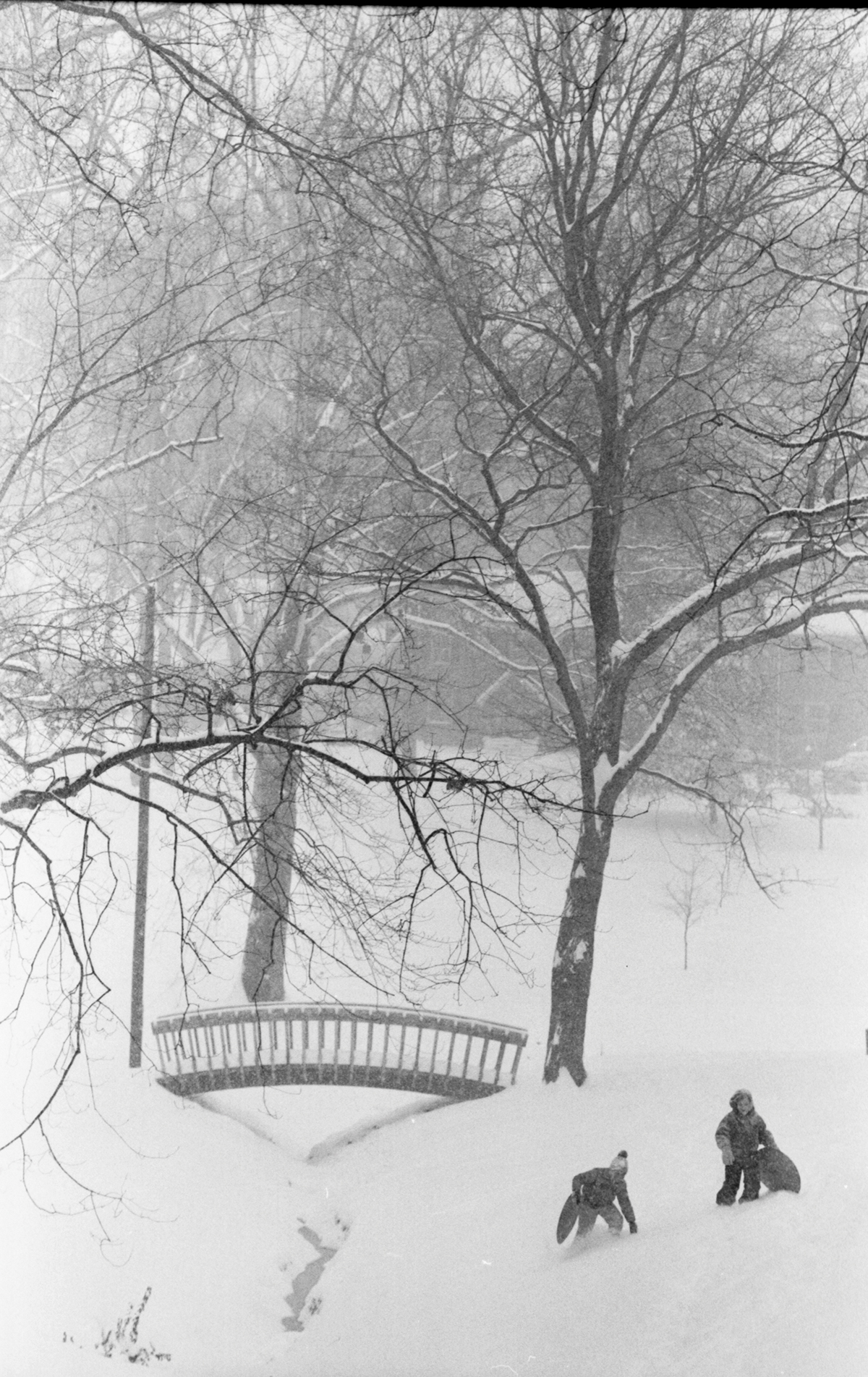 The winter of 1987-88 was one of Charlotte’s snowiest of the past 40 years. This storm in January 1988 dumped 12.1 inches. Charlotte Observer Archives/Davie Hinshaw; Charlotte Mecklenburg Library.

In simple terms: We get less snow now because when we’re cold enough, we’re not wet enough, and when we’re wet enough, it’s too warm. “So we’re either, like, 80 degrees and sunny,” he says, “or we’re freezing cold and dry.”

Panovich admits to some bias. Snow covered his career path. The first weather event he remembers was the Great Blizzard of January 1978, which covered parts of the Midwest and Northeast in as much as 30 inches of snow and caused more than 70 deaths. It remains one of the most severe blizzards in American history, and Akron was near the middle of the affected area.

Panovich was 5. He recalls a massive drift that blocked the front door of the split-level family home. “My dad had to climb out the window to shovel it out because the screen door wouldn’t open,” he says. “I just remember seeing these 6-foot snowdrifts and going, ‘I want to know how and why this happened,’ because I was just fascinated.”

He’s an avid skier, too. So while he understands that many people do not care for winter weather, its growing infrequency here strikes him as a bummer. He expects a milestone within a few years: Charlotte’s first snowless winter. At least a trace has fallen every year since record-keeping began 144 years ago. “It’s going to happen,” he says ruefully. “It’s just a matter of time.”