Why All the Rebrands in Charlotte? An Explainer

Home/Uncategorized/Why All the Rebrands in Charlotte? An Explainer
Previous Next

Why All the Rebrands in Charlotte? An Explainer


In October 2021, the popular uptown food hall 7th Street Public Market announced a new name, The Market at 7th Street, which struck people throughout town as a slight and perhaps unnecessary rearrangement of its old name. About the same time, McColl Center for Art + Innovation dropped the latter part of its name and rebranded to simply McColl Center.

Those are just a pair of Charlotte institutions that, over the past year or so, have rebranded, adopting new names to reflect changes in strategy, philosophy, or perceived identity. Even when the most observable changes are so slight they seem barely worth the trouble—trivial or “extra,” in the Urban Dictionary sense—rebrands are more than that.

They can be signposts for profound shifts in an organization’s direction or fresh starts under new leadership. They can accompany expansions or contractions. They respond to changing tastes and market trends. Whether they’re big or small—or even whether they ultimately succeed—they’re about keeping up with the times, avoiding the stigma that every entity dreads: irrelevance.

“Rebranding isn’t just a new logo or a new name,” says Jennifer Ames Stuart, a professor of marketing at UNC Charlotte, which has undergone its own recent rebrand. Stuart, a former business school dean, says rebrands usually emerge from “reevaluating brand positioning”—marketing lingo for gauging public perception of a business, nonprofit, school, or other entity through data-based research.

Under an even broader definition, it could come from a decision to change anything about a brand, says Bob Killian. He’s a Cornelius resident and CEO of Killian Branding, a business with offices in Charlotte and Chicago that specializes in rebrands. Killian also wrote Rebrand! The How-To Guide for the Darwinian Survival of Your Company/Candidate/College/Cause/Career, published in 2020.

He says “rebrand” can refer to an overhaul (new name, design, positioning, etc.) or a single small change, like a website refresh or introduction of e-commerce. It qualifies as a rebrand as long as it helps establish or enhance identity, he says: “Brand equity is real equity, and one shouldn’t risk squandering it by making a large-scale demolition when a refresh might suffice.”

No one maintains a comprehensive list of rebrands, but Charlotte institutions seem to do it a lot. The likely reason: They’re in constant flux as Charlotte grows, changes, and accepts more people from more places.

UNC Charlotte’s August 2021 rebrand announcement specified that the 75-year-old institution would replace the longstanding abbreviation “UNCC” with “Charlotte.” This decision was, predictably, mocked on social media and elsewhere. “Sorry, it’ll be UNCC until I graduate so I don’t have to keep explaining when people have no clue who ‘Charlotte’ is,” tweeted a student, @Where2NextApril, who added a laughing emoji.

But Charlotte (the university) had what it thought were sound reasons. The school hired a new chancellor, Sharon Gaber, in July 2020, and she began to talk with community leaders, alumni, students, and faculty about the university’s reputation. Stuart says they told Gaber the same thing, over and over: “We punch above our weight.” “We’re the best-kept secret in Charlotte.”

University outsiders, including plenty of Charlotteans, tended to perceive the school as it had been decades before—a low-population commuter school and the small fry of the UNC system. Today, UNCC has more than 30,000 students, which makes it the system’s second-largest university, and is recognized internationally as a research institution.

In October 2020, Gaber announced a 10-year strategic plan that, she wrote in a message to faculty, staff, and students, “offers an extremely important opportunity to set the direction of the future of UNC Charlotte.”

“Everything that doesn’t evolve,” Killian says, “goes extinct.” Especially for businesses, COVID acted as a potential extinction-level event, abruptly uprooting customers’ priorities and habits. They cut back on unnecessary spending. They ate out less, if at all. They had groceries delivered. Fear of the virus led some to demand more e-commerce and contactless options.

“The tectonic plates are shifting under all sorts of brands,” Killian says. “(Businesses) have to examine how change is affecting them, their customers, and their prospects.” With any rebrand comes the risk of its failure. But, he says, brands that don’t evolve with their consumer bases die, outflanked by more nimble competitors. Many brands have gotten the message: Killian Branding, founded in 1987, has made more money in the last two years than in any other two-year stretch in its history.

Charlotte’s already churning business scene, coupled with COVID-fueled jitters about the near future, may explain the recent rebrand wave among all kinds of organizations. 7th Street Public Market changed its name to The Market at 7th Street to emphasize its nonprofit status and set itself apart from other food halls, a spokesperson says; the “Public” in the name confused customers, who had already begun to refer to it as “The Market.”

McColl Center rebranded to signal a new artists-first mission. Optimist Park’s food hall changed its name from Tompkins Hall to Optimist Hall in 2018, a year before its official opening, in response to a public outcry about the Tompkins name; Daniel Augustus Tompkins was a 19th-century textile mill developer who believed abolitionists “went too far.” Truist was born out of a merger between BB&T and SunTrust. The Charlotte Chamber and Charlotte Regional Partnership merged to create the Charlotte Regional Business Alliance.

Stuart says businesses and other organizations have to continually ask themselves: Has my target audience shifted? Do I need to serve a new market? Is there additional opportunity? Has my core market shifted? “Relooking at things constantly and being able to be nimble and adaptive,” she says, “that’s the key in business today.” Especially in a city adapting as nimbly as Charlotte.

Seriously, So Many Rebrands

In retrospect, Charlotte’s enthusiasm for rebrands may have kicked off in 2013, when six local medical centers rebranded to Novant Health centers, including Presbyterian Hospital to Novant Health Presbyterian Medical Center. The hospital adopted a new logo and primary color, aubergine, which Novant said indicated “excellence” and “warmth.” Five years later, Carolinas HealthCare System, which operated the city’s other major hospital, Carolinas Medical Center, changed its name to Atrium Health to reflect its growth as a regional provider. An atrium, the company said, is “a place filled with light” and “where connections are made.”

While more recent rebrands may not be quite as momentous, they still indicate new directions, especially in spaces where public perception is everything. Here are a few more notable rebrands from the past couple of years, just in case, like us, you still occasionally use the old names. 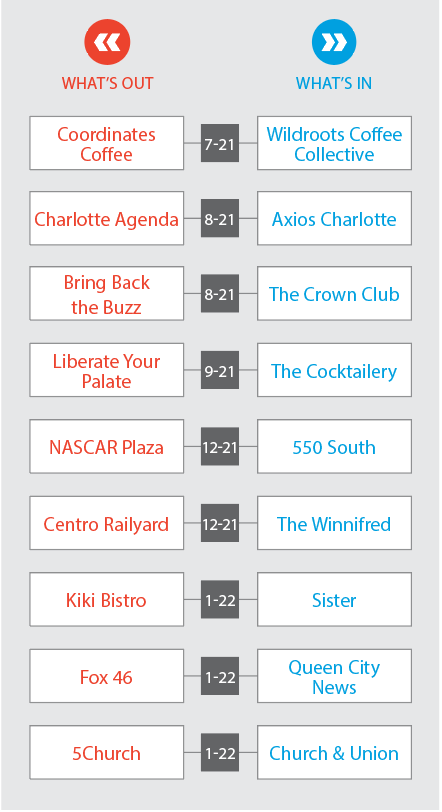