LIVE IN CHARLOTTE LONG and you’ll drive by Washington Heights, whether or not you know it’s there. In the 1970s, part of the neighborhood was demolished to build a ramp onto the Brookshire Freeway, where commuters now zip unimpeded between uptown and Interstate 85. The commute was slower in 1913, when Washington Heights was founded. Black professionals kissed partners and children goodbye and paid a nickel to crowd onto a trolley, which trundled out of the bucolic neighborhood toward town.

Washington Heights—named for Booker T., not George—was the first and only “streetcar suburb” built for Black families in North Carolina. In other neighborhoods along Charlotte’s nine trolley lines, from Plaza Midwood to Myers Park, racist deed restrictions made sure the only Black residents were servants. Members of a blossoming Black middle class found an idyllic alternative here, where ample lawns and tidy bungalows made good on the suburban promise of slow, peaceful living on the fringes of a fast city.

In the century since, Charlotte has swallowed the suburb. History remains essential to its identity—original homes still line sloping streets named for Black leaders—but developers and neighborhood advocates want to make this area a modern haven. Last fall, the city of Charlotte, the Washington Heights Community Association, and Lowe’s Home Improvement collaborated to open The Ritz at Washington Heights, a colorful public gathering space on the site of the former Ritz Theater. Until it closed in 1971, the theater was one of the few movie houses in town that catered to an exclusively Black clientele. 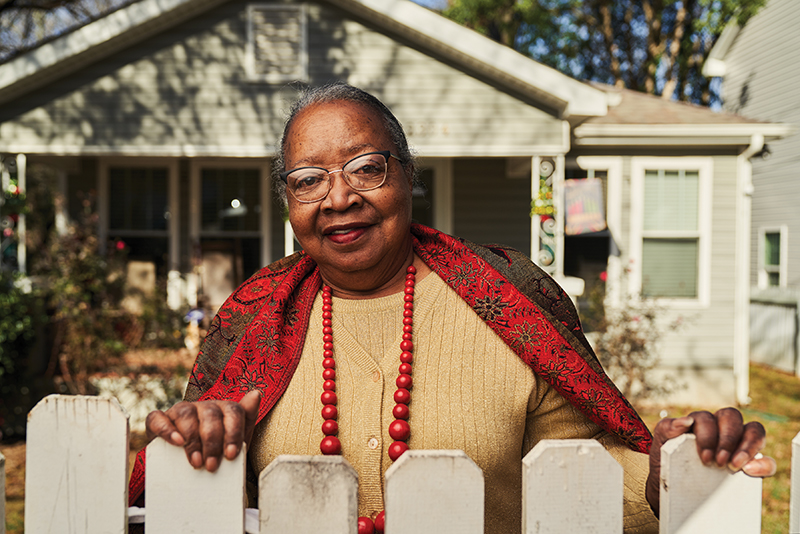 Mattie Marshall (above) has been president of the Washington Heights Community Association since soon after she moved to the neighborhood (below) 31 years ago. 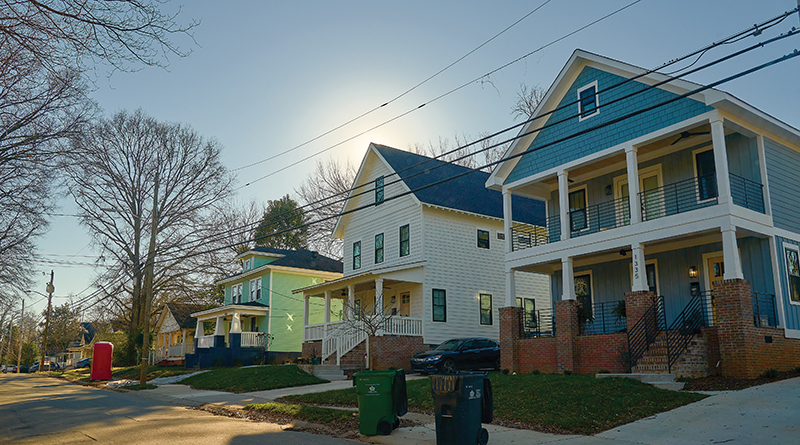 In its new iteration, the space will serve as a community gathering place and public classroom with free Wi-Fi. Soon after its ribbon cutting in November, the new Ritz hosted an open-air movie night with hot cider and cocoa. Attendees could barely keep quiet to watch Black Nativity. They wanted to talk about plans and ideas.

Mattie Marshall shushed her excited neighbors, but she was elated, too. She can’t tell you right away how many years she’s been president of the community association, it’s been so long. She took up the post soon after she moved to Washington Heights 31 years ago, and she’s relentlessly advocated for the neighborhood ever since.

“I fell in love with the history of the neighborhood,” she says, “and the proximity to uptown.” It takes less than 10 minutes to drive the couple of miles south to the city center. On balmy days, under the decades-old tree canopy, Marshall sits on her porch and chats with her neighbors. Not far away, cars fly down the freeway. “People oftentimes from the outside,” Marshall says, “do not recognize or do not see the rich history, the culture of these particular neighborhoods that are located along Beatties Ford Road.”

Early on, Washington Heights welcomed a range of residents, from doctors and lawyers to railway workers and employees at nearby Biddle University. “Colored Charlotte,” a 1915 pamphlet that celebrated 50 years of progress since slavery’s demise, lavished several pages on Washington Heights and its residents. Grocery stores, salons, and a photography studio sprung up along Beatties Ford Road. From its founding in 1944 until it closed in 2016, the elegant Excelsior Club, a social club and longtime hub for political leaders, anchored the commercial strip. Locals took to calling the retail area The End, near as it was to the trolley’s last stop.

In January 2020, California-based Kenwood Investments bought the Excelsior property. The next year, the company released plans that included a boutique hotel, indoor-outdoor concert space, and an upscale restaurant. The developer enlisted Neighboring Concepts, a firm based in Charlotte’s Historic West End, to design the complex, which will also display memorabilia to celebrate the club’s illustrious guests, from Louis Armstrong to Bill Clinton. In an update to the community, Kenwood’s founder and CEO, Darius Anderson, expressed his hope that the property would reclaim its reputation as a center for Black political and cultural life.

“Colored Charlotte” boasted that 805 Black Charlotteans owned homes in 1915. Many of those resided in Washington Heights, where home prices starting at $600 put ownership within reach. But since the neighborhood’s founding, lots of residents have rented. Today, just 24% of the houses there are occupied by their owners, compared to 56% countywide. Home prices now average $100,111, less than a third of the Mecklenburg County average. 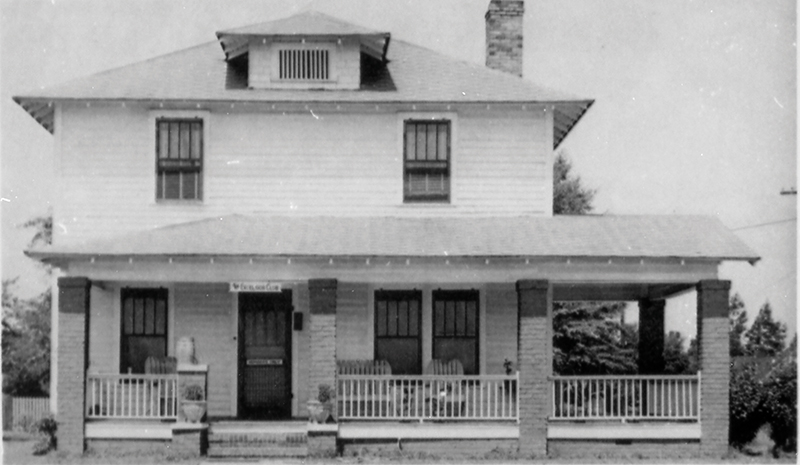 In 1952, McKee renovated the Excelsior Club, shown here in 1984 (below), in the art moderne style. Shows at the club (bottom) were broadcast live on WGIV, the city’s first Black radio station. Robinson-Spangler Carolina Room, Charlotte-Mecklenburg Library. 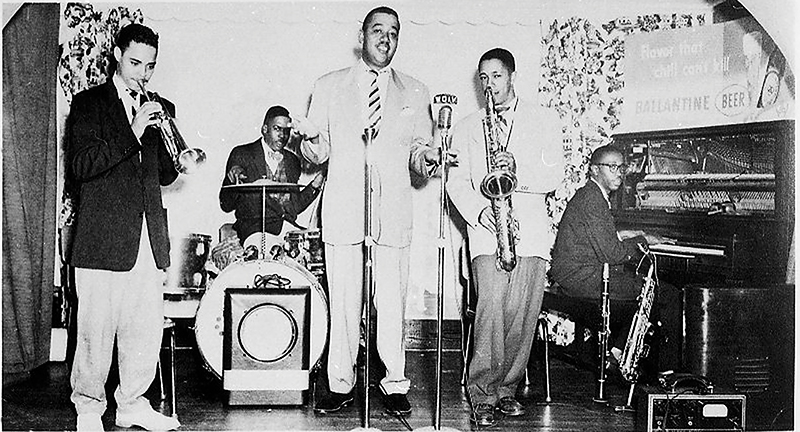 Plans for the neighborhood originally included a green space, to be called Lincoln Park, along the creek at the heart of the residential area, but the plans never came to fruition. Instead, early residents picnicked under wooden pavilions at Watson Park, “the only Park around Charlotte for Colored People,” according to “Colored Charlotte.” The park eventually closed, likely prey to the Great Depression. The neighborhood went without a park for decades until the 2000s, when the county opened the 11-acre L.C. Coleman Neighborhood Park, home to a softball field and two full-size basketball courts. Today, a banner near the parking lot promises park improvements soon. These days, every Washington Heights resident lives within a half-mile of public green space.

They all live within a half-mile of public transit, too. Where the trolley once ran, CATS bus Route 7 now extends north to I-485 and ferries riders south toward uptown, past the university, renamed Johnson C. Smith in 1923. Marshall calls her neighborhood walkable—almost 60% of Washington Heights’ streets have sidewalks—but she wants more connections to greenways and public transportation. Though it doesn’t reach all the way to Washington Heights, today’s trolley ends near here, too; the Gold Line runs to French Street, just across Brookshire Freeway.

The Washington Heights that Marshall and her neighbors work so tirelessly to build looks a lot like the suburb of yore, and that’s intentional. “We have a unique history,” she says, “and we need to preserve some of this rich history for future generations.” Once again, a streetcar carries commuters and students up Beatties Ford from uptown. Neighbors gather at The Ritz for movies and at the park to relax. If all goes to plan, luminaries will soon swap ideas and stories at the Excelsior, just as they did a half-century ago. This neighborhood at the end of the line, Marshall says, “will be a destination,” just like it used to be.

ALLISON BRADEN is a contributing editor. 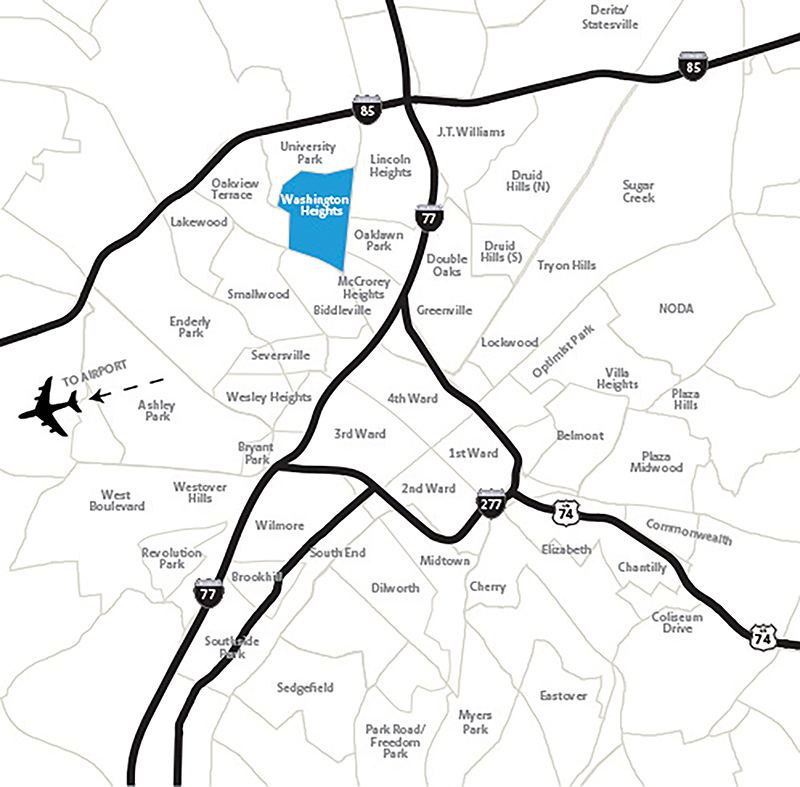 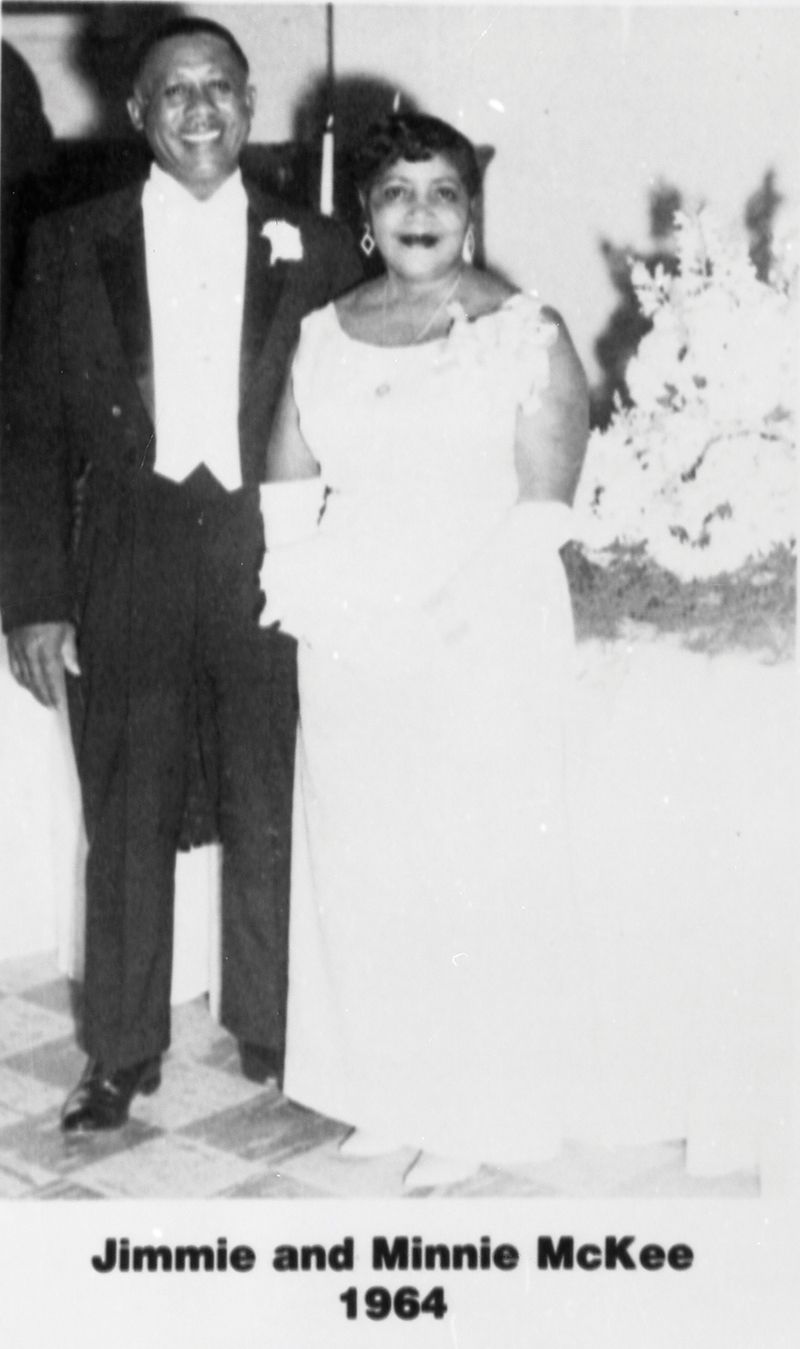