Weekender: A Guide to Visiting The Crystal Coast

Home/Uncategorized/Weekender: A Guide to Visiting The Crystal Coast
Previous Next

Weekender: A Guide to Visiting The Crystal Coast


The Crystal Coast is an 85-mile stretch of beaches that encompasses Beaufort, Atlantic Beach, Pine Knoll Shores, Emerald Isle, Morehead City, and Cape Lookout. It’s roughly five and a half hours from Charlotte by car depending on which town you visit, and each offers a mix of vacation rentals, boutique hotels, and bed-and-breakfasts. You won’t find crowded boardwalks, theme parks, or high-rise hotels that block the ocean views. Don’t expect flashy nightlife, either. Come for pristine beaches where wild horses have roamed for centuries, explore the quaint oceanfront towns at your leisure, and eat your weight in fresh seafood. If you end each day with salt in your hair and sand between your toes, you’re doing it right. —Taylor Bowler

If you have a big group or family reunion, book an oceanfront cottage in Atlantic Beach. New builds like the Poseidon have multiple bedrooms with private baths, rec rooms, pools, outdoor showers, and large covered decks. The Islander Hotel & Resort puts you a few steps from the ocean, and the on-site pool and complimentary bike rentals are great if you’re traveling with kids. For a romantic getaway, reserve a room at Inn on Turner in historic Beaufort. The 1860 home was renovated in 2022, and suites are stocked with plush bedding and towels, and toiletries made by local purveyors. Owners Kim Bell and Jon Haas are also chefs, so guests can enjoy daily breakfast, charcuterie boards, sweets, nightly wine service, and gourmet dinners. 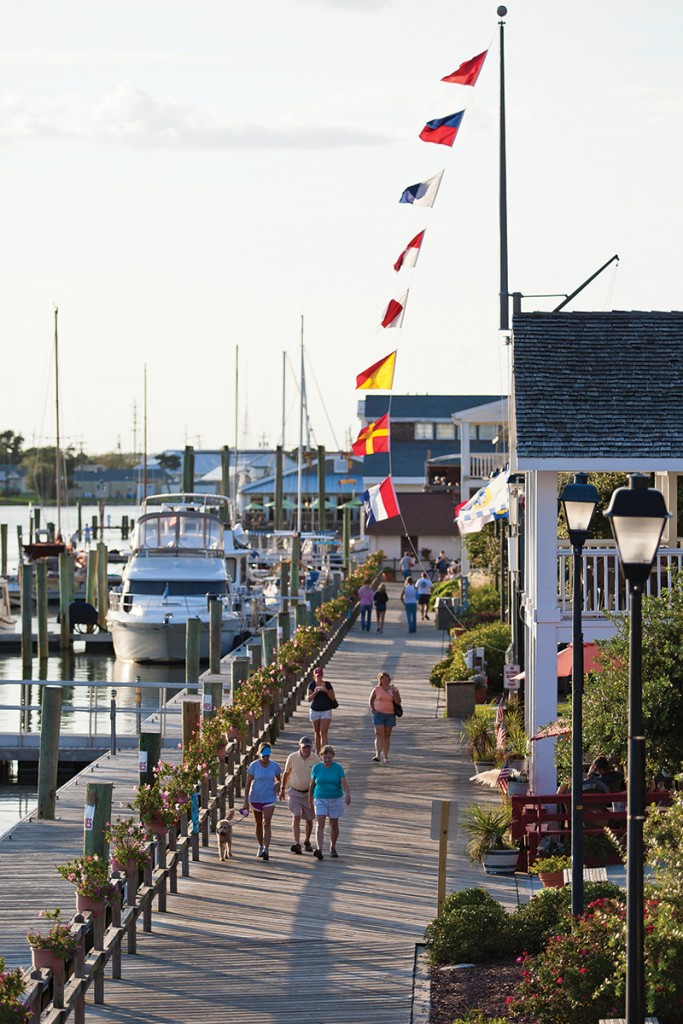 Beaufort (above), first called “Fish Town,” is the third-oldest town in North Carolina. It was established in 1713 and named after Henry Somerset, Duke of Beaufort. The Islander Hotel & Resort in Emerald Isle (below) is a one-minute walk from the beach. Cape Lookout National Seashore (below) contains 56 miles of undeveloped shoreline on three barrier islands: the North Core, the South Core, and Shackleford Banks. 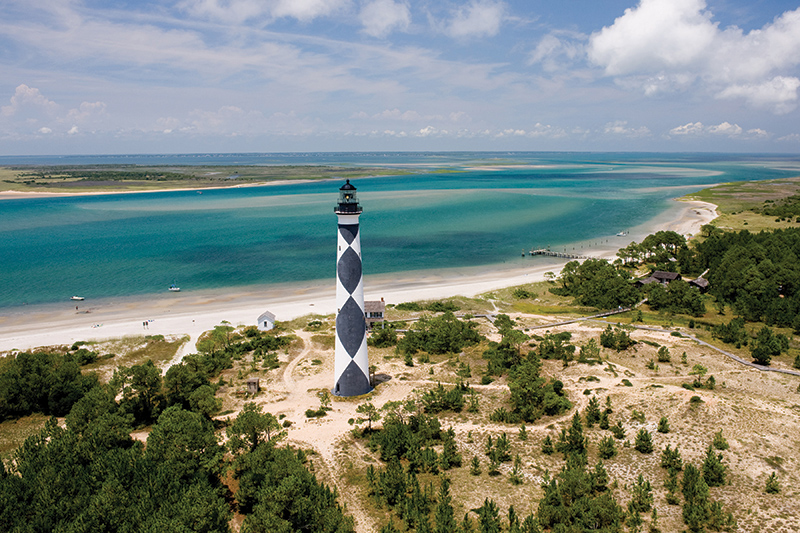 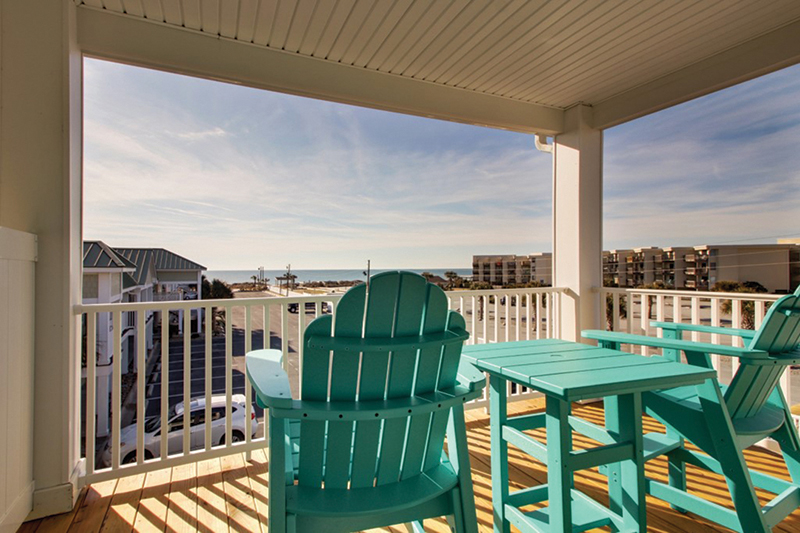 For a hearty breakfast that keeps you full until dinner, head to The Banks Grill in Morehead City. This local favorite makes smothered breakfast burritos, XXL from-scratch biscuits, and cinnamon rolls as big as your face. Grab lunch at Front Street Grill at Stillwater, a renovated boathouse in Beaufort’s historic district that serves fish tacos, salads, and burgers. For a casual dinner, stop by The Island Grille, Atlantic Beach’s “gourmet hole-in-the-wall,” and feast on crab cakes, lobster mac and cheese, and Key lime pie. For a date night or special occasion, book a table at Caribsea in Emerald Isle and dine on oysters, sushi, and filet mignon.

The Crystal Coast has the longest fishing season on the Atlantic coast thanks to the Gulf Stream current, which makes the waters warm and translucent. Catch flounder and striped bass from the Bogue Inlet Pier or Oceanana Pier, or charter a fishing boat through Salt Air Ventures Rent a kayak or stand-up paddleboard at Beaufort Paddle and explore Taylor’s Creek, where dolphins often swim alongside you, and hop off at the Rachel Carson Reserve, where wild horses play in the dunes. If you prefer dry land, stroll the tree-lined streets of historic Beaufort (pronounced “BO-fert”) to see century-old cottages and ancient cemeteries. Visit the North Carolina Maritime Museum to view artifacts from Blackbeard’s wrecked flagship, shop the boutiques along Front Street, and stop by Fishtowne Brew House to sample local beer. 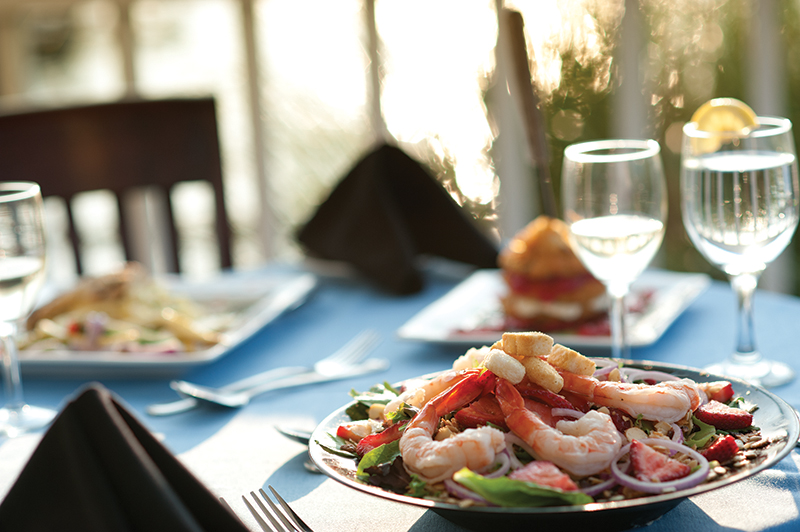 The Crystal Coast’s seafood shacks and waterfront restaurants change their menus depending on the catch of the day. 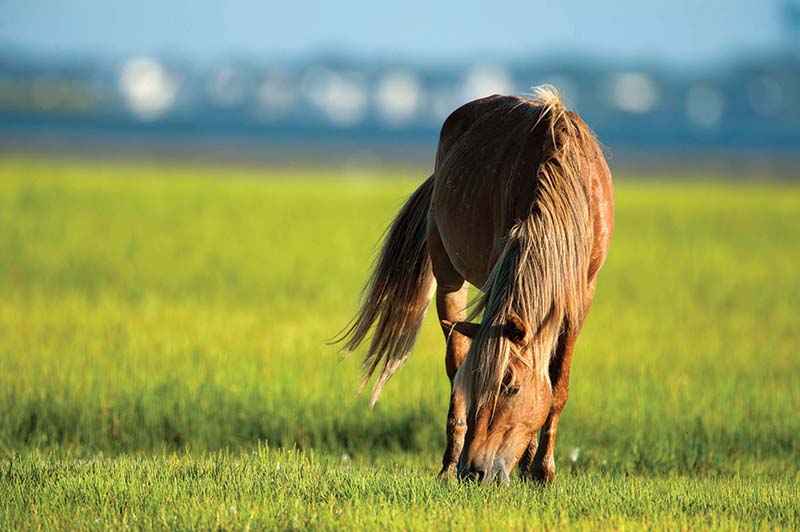 The wild horses on Carrot Island are descended from livestock brought to the island in the 1940s. 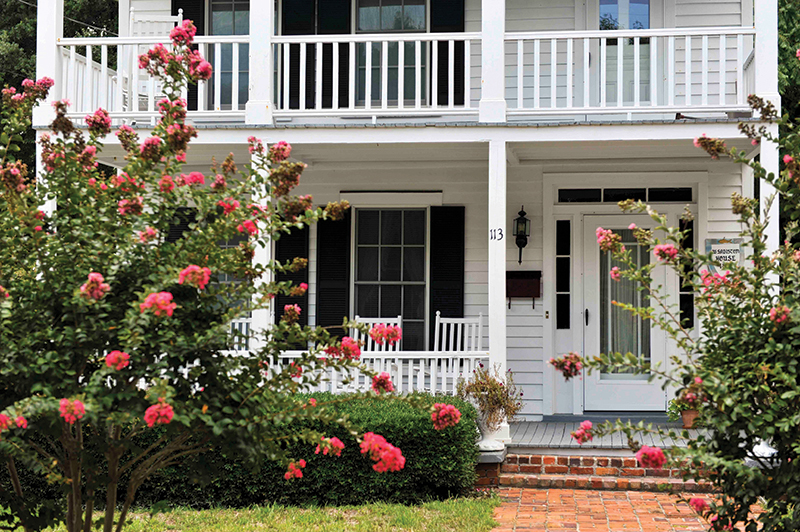 About 150 historic homes in downtown Beaufort have plaques that note the original owners and construction dates.

BEACH YOU TO IT

The Circle is the most popular public beach in the summer months with its seasonal lifeguards, volleyball courts, and nearby restaurants. Fort Macon State Park, on the eastern outskirts of Atlantic Beach, has large parking lots, snack vendors, and restrooms. Station Street Park in Emerald Isle is a great destination for fishing, shelling, and birdwatching; the shoreline is an easy quarter-mile walk from this public park and leads to the edge of the island. For a more secluded beach day, take a 15-minute water taxi from Harkers Island to the Cape Lookout National Seashore, which is deserted except for a handful of rustic National Park Service cabins. Just be aware that the facilities are limited, so bring plenty of water, snacks, and sunscreen.