Weekender: A 2022 Guide to Visiting Atlanta

Home/Uncategorized/Weekender: A 2022 Guide to Visiting Atlanta
Previous Next

Weekender: A 2022 Guide to Visiting Atlanta


A-Town, Hotlanta, the Hollywood of the South, the Big Peach: Atlanta has taken on countless nicknames through the years. In North Carolina, we often refer to it as “Charlotte’s big sister.” We have banks, Bojangles, CATS, and the Knights. They have CNN, Chick-fil-A, MARTA, and the Braves. Both of us wanted the NASCAR Hall of Fame; Charlotte got it. Then Atlanta nabbed the College Football Hall of Fame. Atlanta has worse traffic, more urban sprawl, glitzier shopping, and buzzier restaurants.

The city has 75 streets with the word “peach” in the name, and it’s difficult to navigate without a car. But thanks to the Atlanta CityPASS, it’s possible to see multiple attractions on foot—and in one weekend. If you haven’t visited in a while, or at all, Atlanta has developed quite a few new pockets to explore.

Atlanta and Charlotte became sports rivals in the 1980s and ’90s. The NBA’s Charlotte Hornets first took the court against the Atlanta Hawks in 1988. Since 1995, the Carolina Panthers have knocked helmets against the Atlanta Falcons in the same NFL division. That means the Panthers and Falcons play twice a season—once in the ATL, once in the CLT—and, starting this year, residents of the two cities will spend even more time on each other’s turf. By the time you read this, the new Charlotte Football Club will have already played Atlanta United FC at Mercedes-Benz Stadium in Atlanta. They’re scheduled to play again at Bank of America Stadium on April 9.

So, with the rivalry heating back up, you might as well get to know thy enemy. If you want to have some fun in Atlanta (and not just a long layover at the airport), take the four-hour drive down Interstate 85 and get reacquainted—without the headache of rush hour and with all of the culture, shopping, sports, and good food your time will allow. 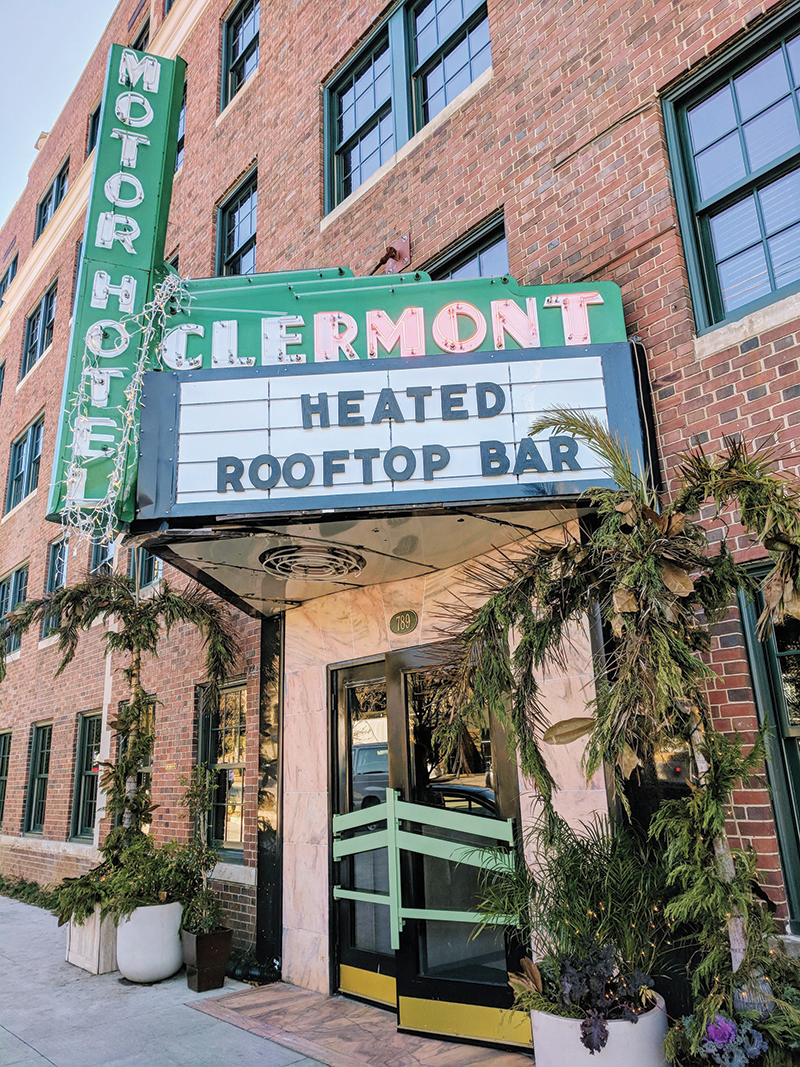 Guests of Hotel Clermont get cold PBRs at check-in as a tribute to the notorious Blondie, who works at the legendary lounge downstairs. Courtesy ACVB Marketing/Melissa Alpine.

If you’re here to shop, stay at Hotel Colee in Buckhead, which puts you within walking distance of the neighborhood’s two high-end shopping malls. The hotel lobby is a revolving art gallery that displays prints by Atlanta-based artists. Renowned designer Andrew Alford fashioned each floor with a different mix of prints and pastels, including a fourth-floor infinity pool with a multicolored pool deck. For a taste of Atlanta history, stay at the Georgian Terrace Hotel, across the street from the Fox Theatre in Midtown. The hotel has hosted notable guests like F. Scott Fitzgerald and President Calvin Coolidge, as well as the 1939 premiere of Gone with the Wind. For a more eclectic scene, book a room at Hotel Clermont. The renovated 1920s building has funky tiled bathrooms and retro artwork, and it’s about a 20-minute walk from Piedmont Park. 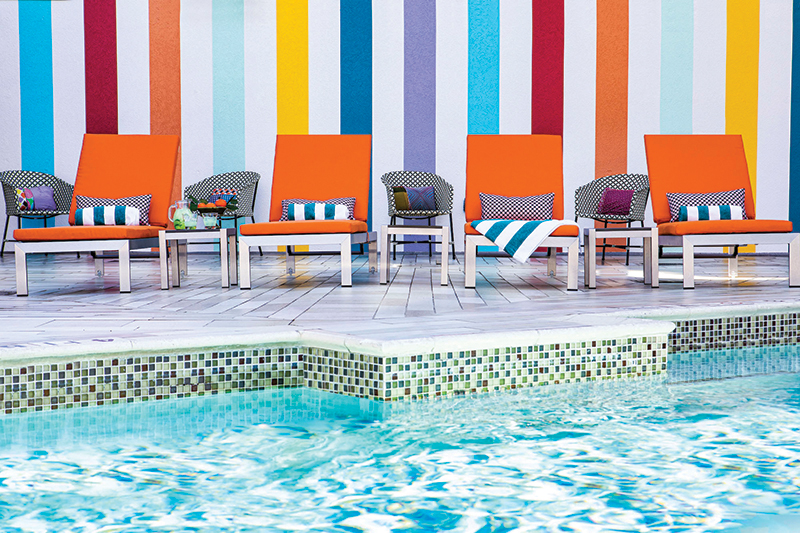 Atlanta is full of trendy new restaurants and old-school eateries, but getting to them by car is practically unavoidable. Call an Uber, and start your day at Java Jive, a retro diner that claims to serve “Atlanta’s best biscuit.” This cash-only joint has slung waffles, pancakes, and omelets for 28 years. For a light lunch or midday caffeine bump, head to Kinship, a butcher-shop-grocer-coffee-counter hybrid in Virginia-Highland. Co-owners Myles Moody and Rachael Pack can tell you the story behind each bottle of wine they sell while you wait for your sandwich or shop for fresh meat and local cheese. Grab a casual dinner at Taqueria del Sol, a counter-service restaurant with affordable tacos and margaritas and multiple locations across the city. For a livelier night on the town, make a reservation at TWO urban licks, a converted warehouse in Old Fourth Ward where you can hear live music Wednesday through Saturday and nosh on Salmon Chips, Pork Belly, and Smoked Brisket. 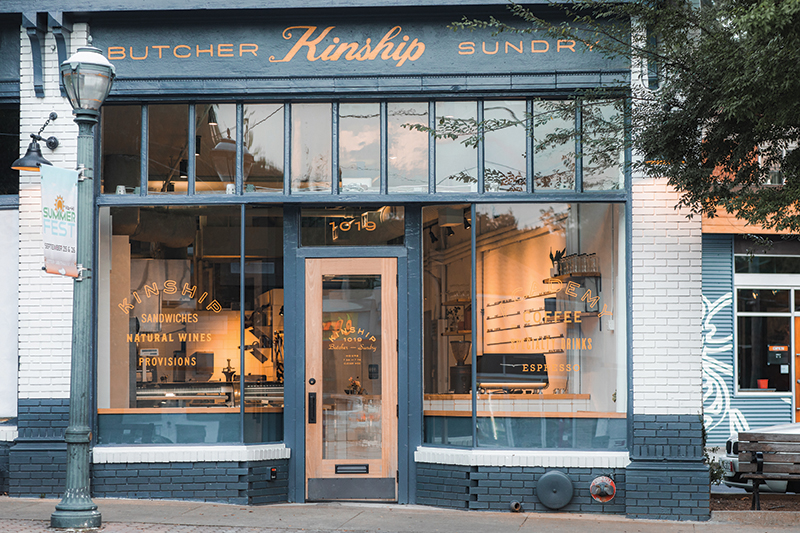 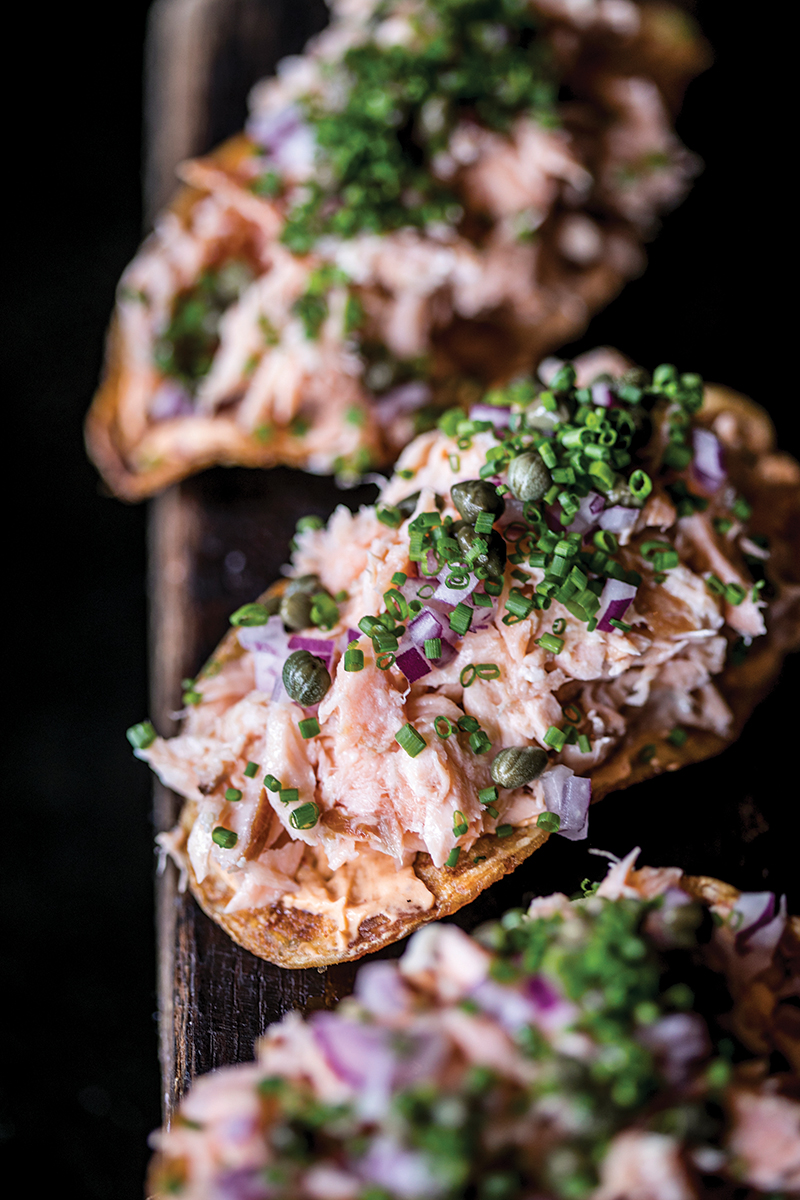 Stroll the Atlanta BeltLine, a 33-mile loop that circles the city, and take a break at Ponce City Market, a food hall with everything from Indian street eats to artisan coffee. Find souvenirs in the market’s shops, have a drink at the beer garden, play a round of miniature golf on the rooftop, or ride the three-story slide at Skyline Park. For a leisurely afternoon outdoors, bring a picnic to Piedmont Park. In the summer, kids can cool off at the park’s public swimming pool or Legacy Fountain splash pad. If you explore downtown, visit Centennial Olympic Park, 22 acres where you can see multiple attractions in one place. Hunt for sharks at the Georgia Aquarium, tour the National Center for Civil and Human Rights, and stop by the World of Coca-Cola to sample more than 100 flavors of soda. Head to the other side of the park for a studio tour of the CNN Center and a view of Atlanta’s SkyView Ferris wheel. Before you leave, take a selfie in front of The Spectacular, an aluminum sculpture of the Olympic rings near the park’s east entrance. 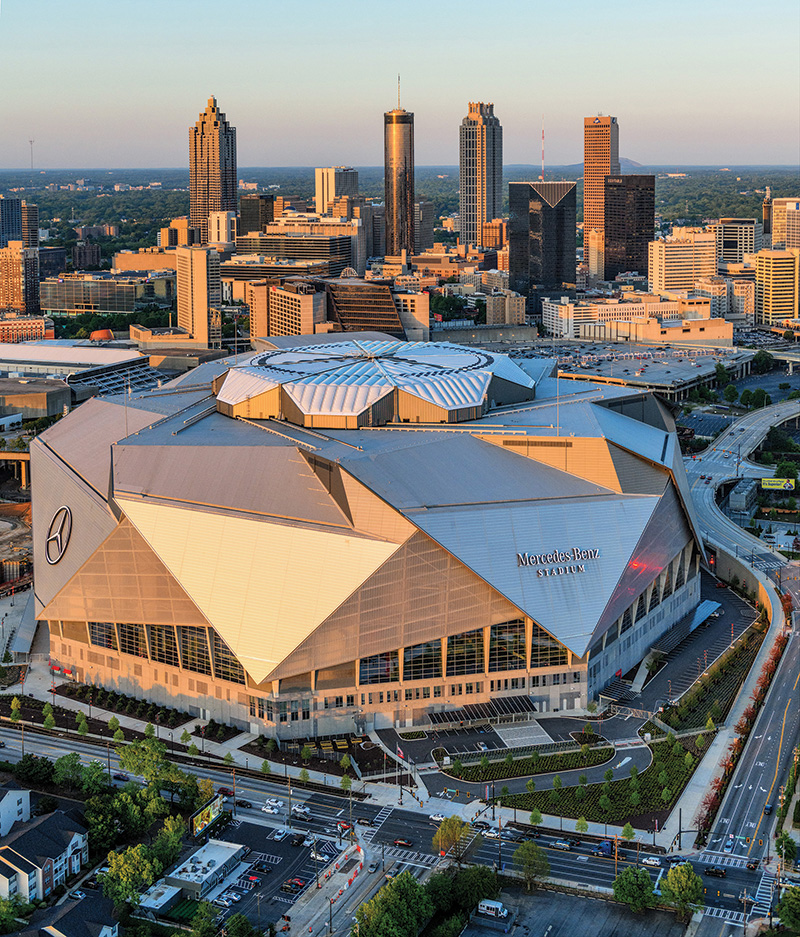 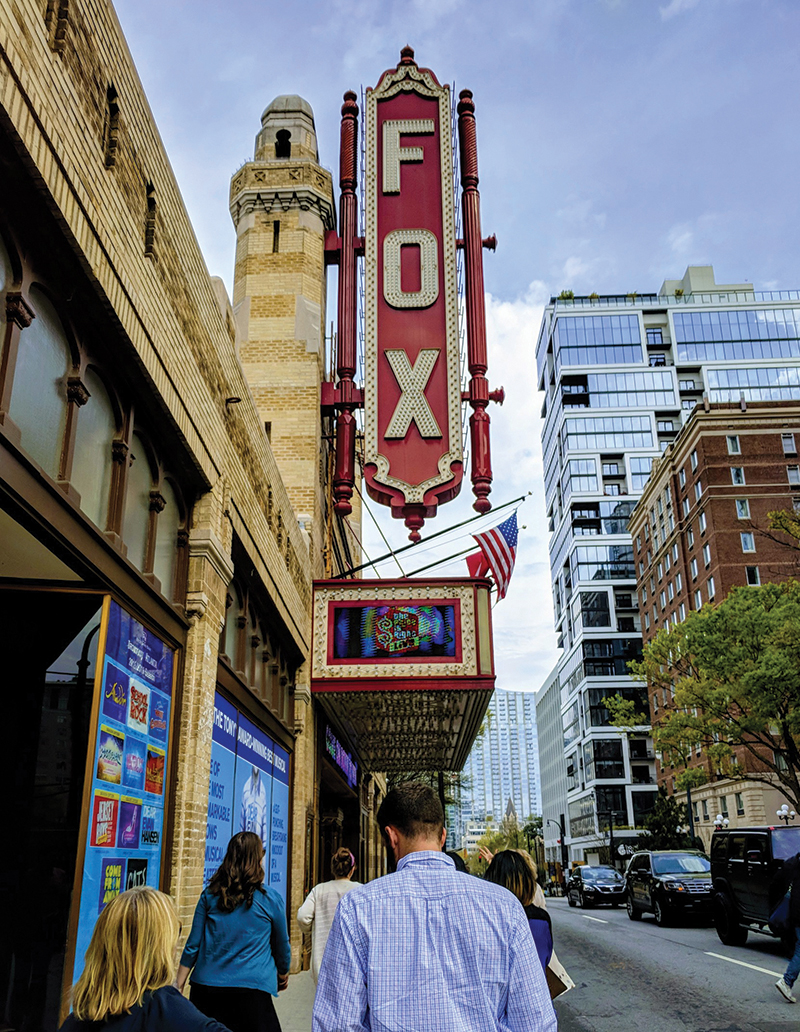 What’s often called “the I-85 rivalry” gained even more momentum on Dec. 17, 2019, the day Major League Soccer formally granted Charlotte its own franchise. Team owner David Tepper promised that Charlotte-Atlanta would be “a hell of a rivalry,” and the league proclaimed the start of an “I-85 Derby” with Atlanta United.

Now, Charlotte FC fans fill the upper level at Mercedes-Benz Stadium with Carolina blue. Fan clubs like Mint City Collective organize watch parties and bus trips for away games, and Charlotte FC’s Chief Fan Officer Shawn McIntosh says he’s already sensing quite a rivalry. “Right off the bat, there are so many great parallels,” he says. “Both teams are owned by NFL owners and play in NFL stadiums. There are a lot of things that Atlanta has done well that we can look at. This has all the ingredients for a really fun rivalry: geography, social media where fans can engage, and really passionate fan bases on both sides.” 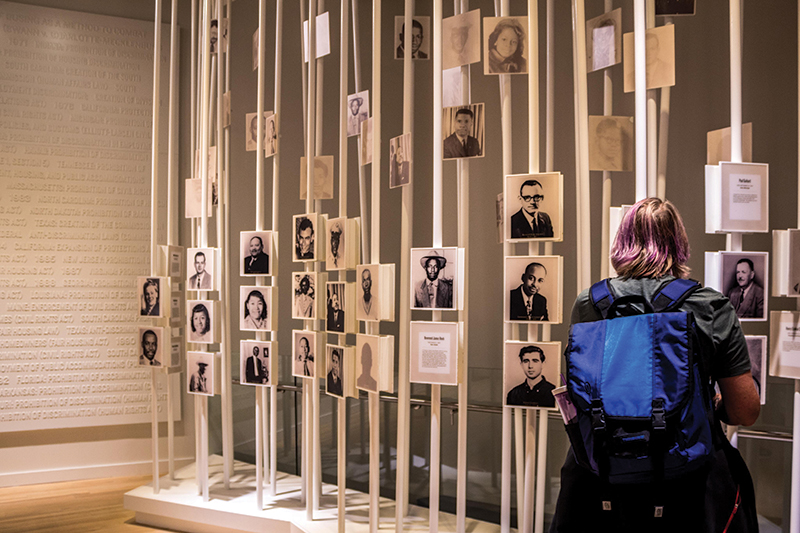 Ticket prices can add up, so get familiar with Atlanta CityPASS, a discounted ticket package the city debuted in 2019. CityPASS gets you admission to five popular spots, including the Georgia Aquarium, World of Coca-Cola, and Zoo Atlanta. For your last two attractions, choose between the National Center for Civil and Human Rights, Fernbank Museum of Natural History, and the Chick-fil-A College Football Hall of Fame. A CityPASS is $77 for adults and $63 for kids 12 and under. It gets you expedited entry during peak times, and it’s valid for nine days.