Librarian Shelia Bumgarner got the call in spring 2021. A longtime Charlottean wanted to donate an old map. It turned out to be an unexpected treasure, a hand-inked sheet measuring 4 by 5 feet—and drawn in 1855. Dubbed the Harris Map, it is the oldest detailed map yet known of Charlotte. “I’ve never seen anything like it,” Bumgarner says.

That’s quite a statement coming from Charlotte Mecklenburg Library’s Robinson-Spangler Carolina Room. One of the best local history collections in the Southeast, it boasts 84,607 volumes on the region’s history and culture. That’s not counting thousands of one-of-a-kind archival items, plus genealogical resources that help users trace family histories worldwide.

John O’Connor, the Carolina Room’s director, sent the map to ECS Conservation, a nationally known specialist in Greensboro. Experts painstakingly removed a Masonite backing, cleaned off varnish as well as nicotine scum from generations of cigarette smoke, and reattached crumbling fragments. The map now rests in its own custom archival box.

Meanwhile, Dr. Tom Cole, another Carolina Room librarian, dug into newspaper archives. What was this, exactly? 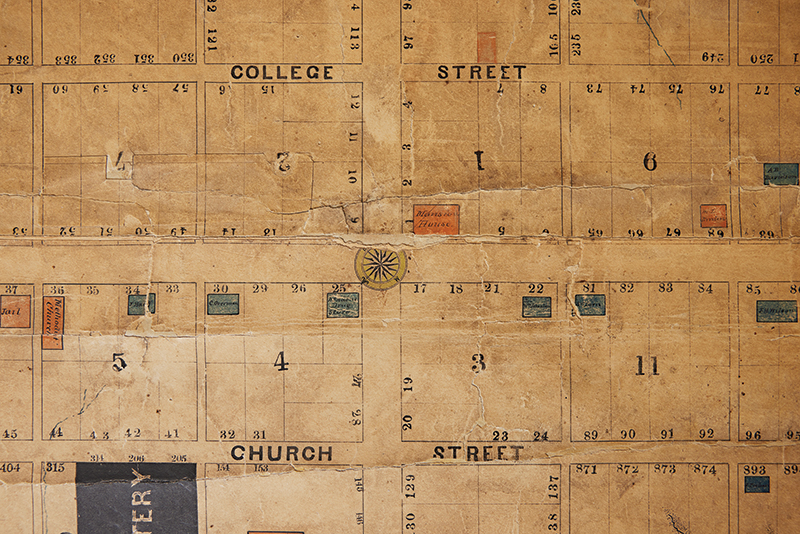 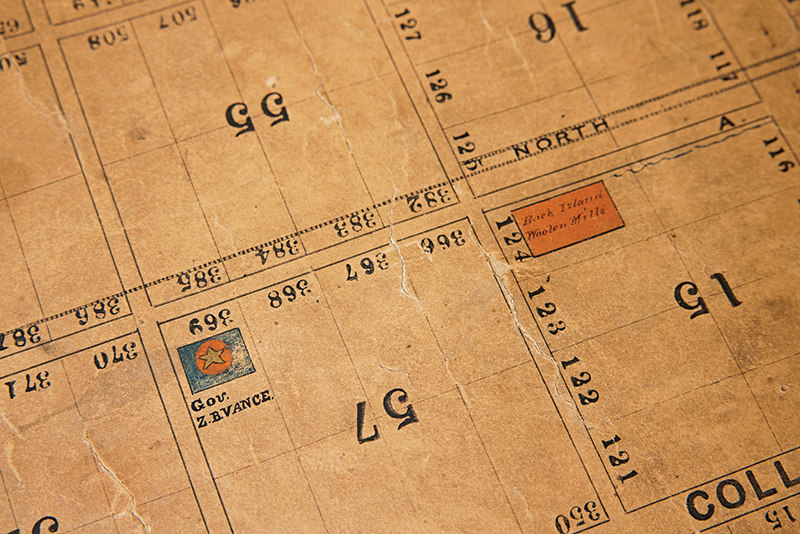 He discovered a town treasurer’s report in an 1856 Charlotte Democrat newspaper. It listed payment to “James Parks for making town map in 1855: $26.62” (about $900 today). Parks, the county surveyor, drew the map for the use of tax collector Samuel A. Harris—thus the name “Harris Map.”

The map displays a grid of straight streets inside what is now the Interstate 277 loop. It ends near McDowell Street (then Boundary Street) to the east, Morehead Street to the south, Graham Street to the west, and 10th Street to the north. “You can see,” Bumgarner says, “what a small place Charlotte was then.” 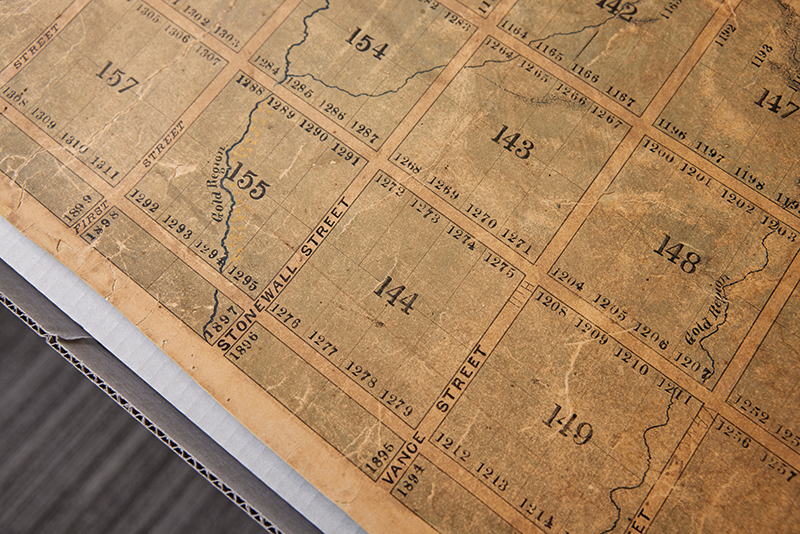 The map illustrates how city officials often changed street names as Charlotte grew in the years after the Civil War.

The map divides each block into building lots, numbered for tax record-keeping. Trade and Tryon streets cross at the center, then, as now, the heart of town. The map shows only a few key structures. A brick-colored rectangle in the first block of South Tryon catches my eye, roughly where Eddie V’s Prime Seafood is now. “Mansion House,” the label says.

“That,” Bumgarner explains, “was Charlotte’s main hotel for decades.”

Parallel to Tryon Street, the Charlotte & South Carolina Railroad comes up from the south, while the North Carolina Railroad descends from the north. Today, the LYNX Blue Line runs on that route. In the 1850s, those two railroads changed Charlotte’s trajectory. When they connected this little town to the outside world, we blossomed as the trading center for this part of the Carolinas. Growth took off and never stopped.

Follow the tracks to Sixth Street to find a house tagged “Gov. Z.B. Vance.” That would be Zebulon Vance, elected governor in 1862. After the Civil War, he became an attorney—based in Charlotte, due to its good rail connections—before he left in the 1870s for further political adventures.

Look westward down Trade Street. You’ll see First Presbyterian Church and adjacent Old Settlers’ Cemetery, still there today. A block farther is the U.S. Mint. Opened in 1837, it was the first branch outside the main facility in Philadelphia, constructed here to process gold mined from Carolina hills. The federal courthouse stands on that site today, and the building moved to Randolph Road and became the Mint Museum of Art. 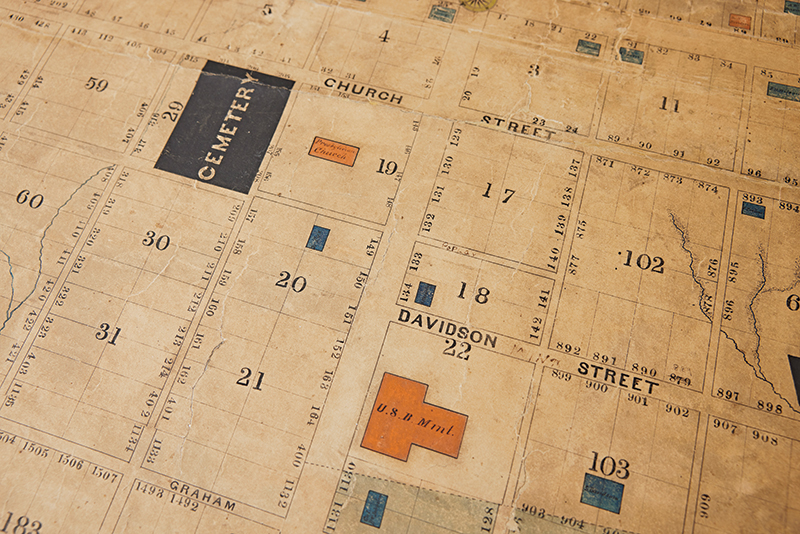 First Presbyterian Church (below) next to Old Settlers’ Cemetery; both remain. A block away is the former U.S. Mint building, opened in 1837 and now the federal courthouse.

The Harris Map was a “living document,” updated as Charlotte changed. Large letters mark the four wards of what’s now uptown. Those were election districts, which didn’t exist when the map was first drawn. By 1869, when officials created them, the town needed more than one ballot box.

Street names are a fascinating aspect of the Harris Map. Recently, Charlotte’s Legacy Commission, appointed by Mayor Vi Lyles, has grappled with renaming streets that honored Confederate military leaders. That’s raised hackles for some people who assume that the current names have always existed. Not so, the Harris Map proves.

Look closely at Stonewall, Hill, and Vance streets—named for Confederate generals Stonewall Jackson and D.H. Hill, along with Governor Vance. The block lettering clearly differs from older First and Second streets. Carolina Room research has nailed the date when all three were named: June 26, 1869.

The Harris Map may be viewable online by the time you read this. A new web portal, vault.cmlibrary.org, is expected to debut this month. In June, O’Connor says the map will be first in line when the Carolina Room’s digitization lab begins operation in late summer. It’s part of off-site quarters, not open to the public, in the just-built Library Administrative Center on Eastway Drive.

The old Main Library is set to be demolished, with an elegant modern facility opening on its downtown site in 2025. A new Carolina Room will welcome researchers there.

Tom Hanchett, a local historian since 1981, is the author of Sorting Out the New South City: Race, Class, and Urban Development in Charlotte. Follow him on Twitter at @historysouth.

> The new Main Library project has temporarily closed the Carolina Room to the public. But its librarians accept research questions via phone or email: carolinaroom@cmlibrary.org,
704-416-0150.