Here’s how Dustin and Elise Gatliff, partners in business and life, got there. They met when both tended bar at the Outback Steakhouse in Pineville. He was a talented handyman and serial entrepreneur who’d never turned much of a profit with any of his ventures. She was a risk-averse type who’d saved money since her first job at 15 and eventually became a CPA at Deloitte.

Dustin had a side hustle making and selling cornhole boards and bags. Then he began to refinish and sell furniture. He needed space for that, so he rented a warehouse in downtown Monroe. He then dropped the furniture business and converted the warehouse into a brewery, which he and Elise founded in 2016: Southern Range Brewing Company, the city’s first independent brewery and taproom.

Elise eventually got sick of her long hours and decided to run Southern Range full time while Dustin scratched his entrepreneurial itches: He experiments with recipes, designs can labels—oh, he also went to school for graphic design—and tends to the equipment.

See? Textbook business plan. Just like they teach it in MBA programs.

“So opposite. We talk about that all the time,” says Elise, 35, on a September afternoon in the taproom. “Some other people I know are in business with their husbands or wives, and they struggle in certain areas because they’re not opposite enough. Anything he can’t do, I can do, and anything I can’t do, he can do—and we’re best friends.”

Hard work got them through initial difficulties. Dustin built much of the interior, and they kept Southern Range afloat on Elise’s salary and her savings. For its first five years, Elise says, every dollar the brewery made went right back into the brewery.

That’s the businesswoman talking. Dustin, 38, is more of a creative sort. His interest in brewing started in the usual way. “I started homebrewing with some neighbors,” he says.

“Somebody bought you a homebrew kit,” says Elise, who sits next to him.

“My neighbor at the time …”

“Somebody bought you that stupid $30 beer kit from Target that’s worthless, and you used it one time, and you were like, ‘This is shit.’” (Mr. Beer actually sells for $39.99.)

“Anyway,” Dustin says, “we bought some pretty nice home brewing equipment and started doing that. Being the entrepreneur type, I thought, I’m going to open a brewery. And this was back when NoDa and Birdsong had just opened.”

Around 2012, in other words. But they lived in University City at the time, and they couldn’t scrape together enough money. Dustin continued to refinish furniture until 2015, when he revisited the brewery idea.

“So,” Dustin explains, “it kind of went on the back burner for four, five years.”

The Gatliffs argue like the hemispheres of one brain.

In its six years, Southern Range has sustained itself as a deliberately small operation—the Gatliffs say they want to retain control and don’t want investors—in a place that’s only now feeling the first ripples of the Charlotte beer wave. Southern Range opened at the same time as The DreamChaser’s Brewery in Waxhaw. They were the only two craft breweries in Union County until July, when Americana Beer Company opened on North Main Street, two blocks away from Southern Range. 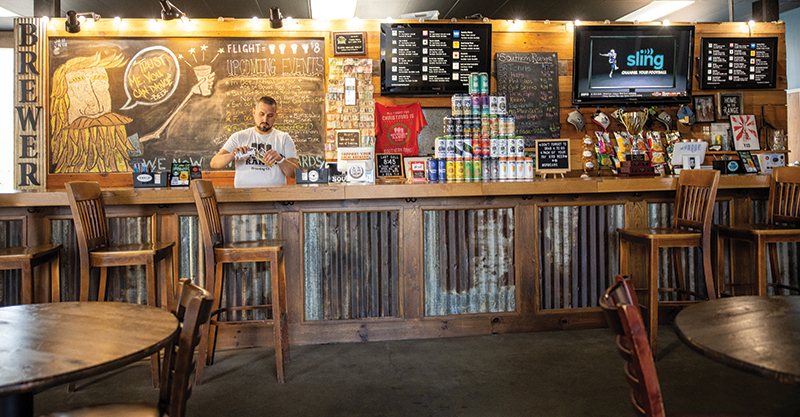 CDustin built most of Southern Range’s taproom (above) from repurposed wood and metal; the brewery goes heavy on hazy IPAs, like the award-winning Tiny Ass Umbrella (below). 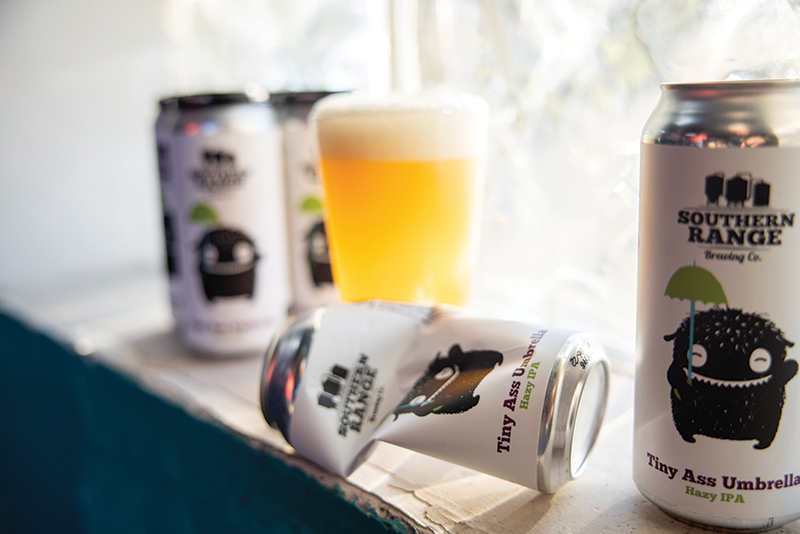 Dustin and Elise expect more brewers to open in Union County, especially given real estate prices in Charlotte. When those brewers come, Southern Range can fall back on a reputation for quality beer. One of its bestsellers, Tiny Ass Umbrella, won the New England IPA category in the first-ever CLT Brewed Awards in Charlotte in May.

Now they’re aiming for their first, modest expansion: Local Logic, a small-batch brewery in the same building with a cocktail bar attached. They hope to open by the end of the year. Even if it takes longer, they have Southern Range as the product of their unlikely partnership.

“Somehow,” Dustin says with a chuckle, “we made it work.”