A crowd gathers around a robust, russet creature named Dang It. As of July, Dang It had made a good career for himself since his professional debut in 2017, with 41 events under his clipped horns. Riding Dang It or any of his colleagues can be hazardous to your health, as his co-owner knows better than just about anyone alive. But today, in a rural community outside Lexington, Dang It stands solidly on his hooves, placid and agreeable, within a steel pipe enclosure erected in an unusual setting: the parking lot at Richard Childress Racing Museum.

Like the rest of us, Dang It is here for a press event, the formal introduction of the Carolinas’ newest professional sports team: the Carolina Cowboys. The event organizer, and the professional league the Cowboys are joining, is Professional Bull Riders, founded in 1992 by 20 guys who decided they wanted to earn a little more money between rodeos. In 2022, nine days before this event, a PBR rider won a single-event purse of $2.1 million.

The Cowboys are part of a new series that PBR’s leaders hope will turn a niche but growing sport into a national phenomenon, something like NASCAR in the 1990s. (Those leaders are well aware that PBR is an abbreviation of something else in popular culture, which opens up sponsorship possibilities, not to mention the prospect of drinking a PBR at PBR.) Stock car racing is an individual sport, but the drivers represent teams, too: Hendrick Motorsports, Stewart-Haas Racing. What if you took the same idea from the drivers’ seats to the bulls’ saddles? What if you added civic pride to the mix—based a team of riders in a particular city and, say, pit the Austin Gamblers against the Nashville Stampede? 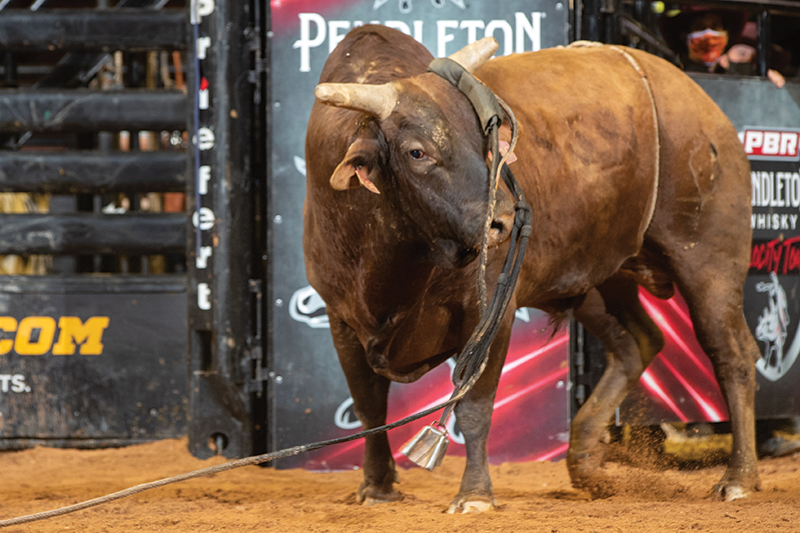 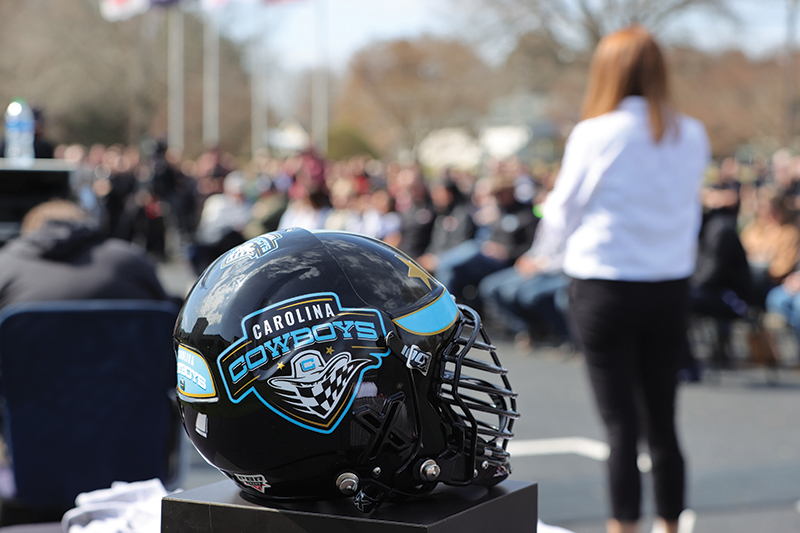 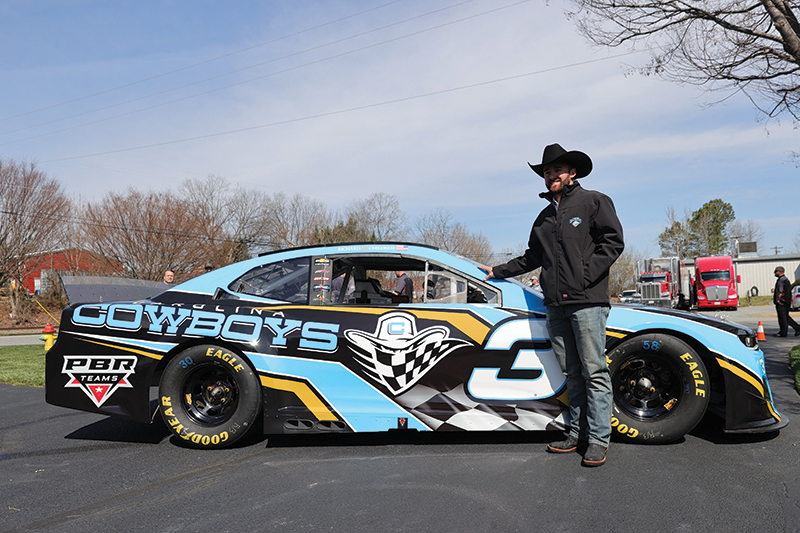 PBR and NASCAR fans have a lot in common, and they’re often the same people, says Austin Dillon (below), at the rollout with a Cowboys show car that bears his number 3. Courtesy of Bull Stock Media.

Or the Carolina Cowboys? It’s a crisp March morning at the Childress Museum, and the luminaries have arrived: Sean Gleason, the league’s CEO; Austin Dillon, the NASCAR Cup Series driver and Daytona 500 winner; Richard Childress himself, Dillon’s grandfather and a NASCAR legend in his own right; and Jerome Davis, the original Carolina Cowboy, who navigates the grounds and greets attendees from his wheelchair. Everyone but Dang It wears jeans, boots, and cowboy hats.

Gleason tees them up. Childress, who turns 77 this month, is the team’s owner and operator. Dillon, 32, is its general manager. Davis, 50, is its head coach, who’ll prepare for and guide a team of 12 riders through the five-on-five bull riding games that make up Team Series competition. That started in late July in Cheyenne, Wyoming, and culminates with the championship in early November in Las Vegas. (PBR still holds traditional individual events, too, now branded as the Unleash the Beast Series, which runs from January to May.) Each of the eight teams hosts a three-day event—the Cowboys will hold theirs from Sept. 9 to 11 at Lawrence Joel Veterans Memorial Coliseum in Winston-Salem.

When it’s his turn to speak, Childress zeroes in on why he and PBR bet that a pastime traditionally tied to the ranches and open spaces of the Wild West can leave tracks in the land of stock car racing and tobacco farms. For participants and fans alike, the adrenaline high from racin’ isn’t but once or twice removed from the thrill of ridin’. To drive home the point, the news conference has welcomed another honored guest, a mechanical counterpoint to Dang It: a promotional Camaro racer that sports Carolina Cowboys decals and Dillon’s No. 3.

“I gotta keep my drivers off the bulls. A couple of ‘em have been asking if they can ride,” Childress says to chuckles from the throng. “Sean and I have been talking about this. Now we’ve got to go do the best part: Go out and win.”

The seven main events in professional rodeo are holdovers from the Old West and rough demonstrations of ranching skill, things like steer wrestling and calf roping. Bull riding is the spectator favorite, the sport’s version of a slam dunk contest. It’s also the most dangerous. A decade ago, a study by a sports epidemiologist at the University of Calgary found that 21 people were killed during professional rodeo events—16 from bull riding—from 1989 to 2009.

In 1992, 20 rodeo cowboys thought they were taking too much risk for too little money. They loved what they did too much to quit, though, and they thought they could make extra money by forming a league exclusively for bull riding. Each rider invested $1,000. 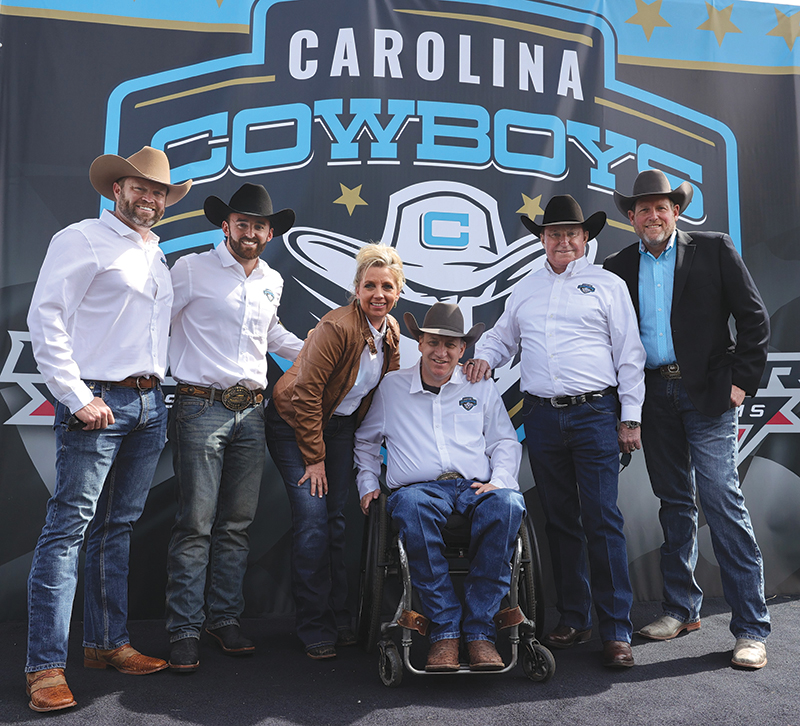 At first, they didn’t know whether PBR would succeed, so they worked around the summer rodeo schedule: They’d do their own events from January through May, ride traditional rodeo events in June and July, then resume PBR in August. But it took off. In 2007, many of the original riders sold their interest to a New York private equity firm. Five years after that, the league signed an exclusive television contract with CBS. The league and network have since extended the deal to 2028.

“I really believe there’s no other sport like this,” says league spokesman Andrew Giangola, whose book about PBR, Love & Try: Stories of Gratitude and Grit from Professional Bull Riding, was published in June. “Picture an NFL game with a clown on the field, making the crowd laugh between violent collisions.”

Childress had always liked rodeo, even when he was a NASCAR driver in the 1970s. He was friends with Tom Teague, who raised bucking bulls in Winston-Salem, and Randy Bernard, who served as the CEO of PBR from 1995 to 2010. Childress likens the experience of watching bull riding to attending a NASCAR or drag race.

“When they start the very first bull that fires out of that chute with a rider on it,” he tells me by phone in June, “you’ll holler, ‘Oh, my goodness, what is this?’ And then the adrenaline starts rushing in the fans’ minds: Man, this is unbelievable, to see how these young athletes can ride these athletic bulls.”

The similarity of the experience matches the overlap among fans of both sports. PBR’s market research shows considerable fan base crossover with NASCAR: 51% of NASCAR fans are PBR fans, and 61% of PBR fans are NASCAR fans. PBR fans tend to agree strongly with statements like, “I am proud to be an American”; “Overall, you get a better quality of life in the country”; and “My faith is important to me.”

During the press event at the Childress Museum in March, Childress’ grandson reinforces the point. “The riders,” Austin Dillon assures the crowd, “they’re God-fearing patriots.” He adds that they even pray with the bulls before riding them.

By 2020, PBR executives had tossed around the idea of organizing riders into teams that represented cities and states for a few years; since 2017, the league had organized the Global Cup, a bull-riding counterpart to golf’s Ryder Cup, in which teams from different countries compete.

But PBR hadn’t put a plan into practice until COVID kept fans out of arenas. To compensate, and to make sure riders were working, the league supplemented its regular individual events with a new event, the Monster Energy Team Challenge, in which 48 riders split into 12 teams that competed for a championship over five weeks in June and July. It provided PBR with a blueprint. 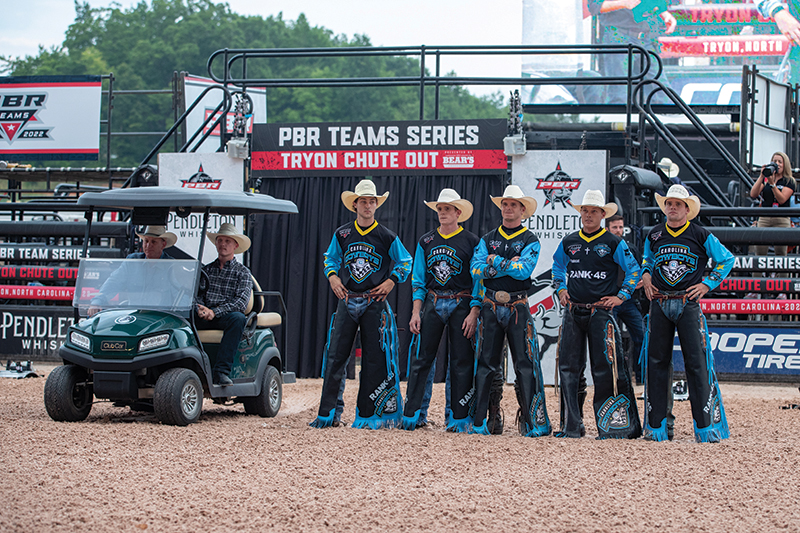 “COVID kind of forced us to figure out a way to do it,” Giangola says. “We could do a team format, and do it with regularity, and have coaches and riders receiving the coaching. We saw the camaraderie, and we saw the heightened levels of excitement when riders get on teams. They’re competing for something more than individual glory.”

Last year, PBR looked at nearly two dozen markets for potential teams and picked eight: two each in Texas and Missouri, one each in Arizona, Oklahoma, Tennessee, and North Carolina. Gleason, the CEO, knew Childress was interested. Childress knew his grandson was interested. Both knew the Carolina Cowboy himself lived and worked just a half-hour away.

Jerome Davis was one of the original 20 riders who started PBR back in ’92. At 19, having grown up on a dairy farm in Archdale and idolizing rodeo cowboys, “I packed my clothes in a minivan and headed west,” he tells me. He started to win, and when some of his heroes started talking about a new bull riding league and an initial $1,000 investment, Davis gave them $500—all he had—and the balance the next week after another win. He was the youngest of the 20.

Davis became one of the league’s early stars and remained one of the world’s best rodeo cowboys, winning the Professional Rodeo Cowboys Association championship in 1995. Three years later, during a competition in Fort Worth, Texas, he was riding a bull named Knock ’Em Out John. The bull bucked, and his head hammered into Davis’ left temple. An unconscious Davis fell to the ground with no way to break his fall; the collision broke his neck and left him paralyzed from the chest down. 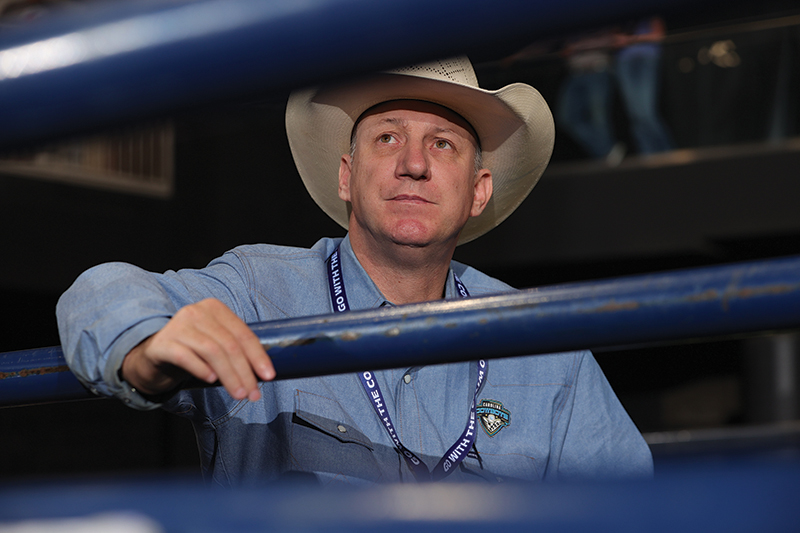 Jerome Davis, the original Carolina Cowboy, was a star in PBR until an accident in 1998 that left him paralyzed from the chest down. “I’m in pretty good shape,” he says, “for the shape I’m in.” Courtesy of Bull Stock Media.

Davis continued to raise bucking bulls and host rodeo events at his ranch in Archdale—the ranch co-owns Dang It the bull with a married couple—and remained close to his friends in PBR. In late summer 2021, Sean Gleason reached out to Davis, brought him up to speed on the new Carolina team, and asked him if he’d be interested in coaching it. “It was a perfect fit when Sean said, ‘Well, hey, let’s get Richard and Jerome together,’” Davis says. “I’ve known Richard for quite a while and always thought a lot of him, and when I heard that he was interested in the team, I was pumped.”

The last piece had assumed its place. And after most of a lifetime in the Carolinas and around bucking bulls, the Carolina Cowboy believes the new team will attract the kinds of folks that turned NASCAR into a nationwide passion.

“It’s the same demographic,” Davis says. “I mean, that same guy who puts in 60 hours a week and likes to go to the racetrack—that same guy wants to go and hang out at the bull riding, you know? It’s that type of fan.

“I think that’s what makes it so good in this part of the country. Racing’s been going on for years, and rodeo has, too. But it’s really come into more mainstream here in the last couple of years, it seems like, and guys are getting paid a lot more money than they used to. It’s just a lot better deal. And I think this team thing’s got a lot of potential, also.”