COVID unleashed so many losses and miseries that lamenting the cancellation of a Greek festival felt trivial. Not being able to watch teenagers dance arm in arm while you lick loukoumades syrup off your fingers at the annual Yiasou Festival didn’t compare with the kind of sacrifices so many have made.

And yet, walking around the fellowship hall at Holy Trinity Greek Orthodox Cathedral on a Friday afternoon in August, it was hard not to mourn yet another loss. Volunteers had been rolling stuffed grape leaves for dolmades and filling freezers with spanakopita for weeks before the church decided to cancel the full festival and do drive-thru with food and pastries.

It didn’t stop them, though: The baklava sessions in August still brought out dozens of church members to layer phyllo, brush on melted butter and syrup, and strew chopped nuts. For Greek Charlotte, the preparations for Yiasou, usually held the week after Labor Day in September, start in July. The cooking sessions are like watching high schoolers build homecoming floats—generations of local families of Greek heritage come to catch up and show the youngsters how it’s done.

Newcomers to Charlotte are often surprised to learn that this Southern city has a sweet Greek heart. Scratch a lot of local restaurants, and you’ll find feta, oregano, and olive oil layered under the gravy biscuits and fried chicken. 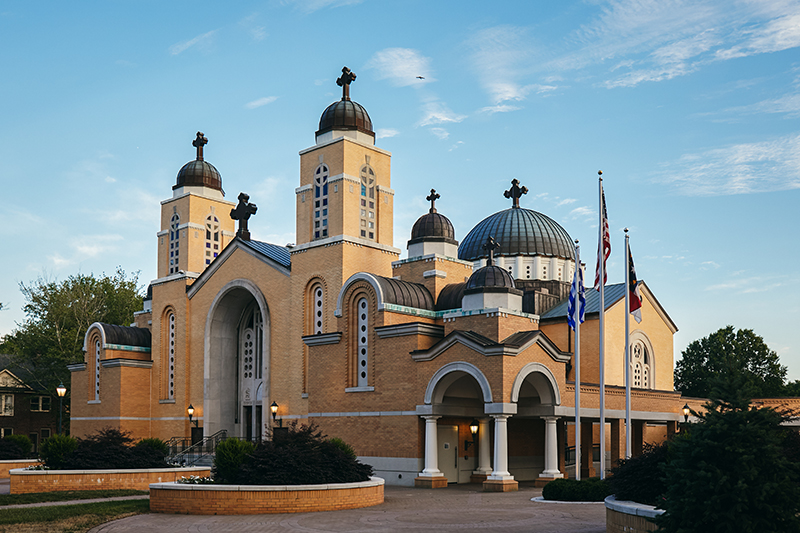 The history of Greeks wandering and setting up homes in faraway lands is as old as Homer’s Iliad. In America, Greek immigrants have left their mark on cities all over the country, particularly on humble spots like diners and coffee shops. In the South, Greek immigrants arrived in cities like Charlotte and Birmingham in the early 20th century, drawn to jobs in textiles and manufacturing—and to kitchen work that allowed them to hone their English while they learned to cook simple, American-style food.

By 1923, Charlotte’s Greek population had grown so quickly that the Greek Orthodox Parish of Charlotte was formed. The current location of Holy Trinity became the metropolis—the regional diocese in the Orthodox Church—for the Southeast from 1955 until it moved to Atlanta in 1980.

Charlotte’s Greek population saw another growth spurt after World War II, when the destruction and a Greek civil war drove young people to America. Under postwar immigration rules, you needed a relative in America to sponsor you. Since Charlotte already had a large Greek population, a new wave of cousins and siblings joined them in the late 1940s and through the 1950s, many getting jobs as dishwashers and short-order cooks while they learned the language, got driver’s licenses, and went on to open their own restaurants.

You can still see the community influences with a drive through Evergreen Cemetery on Central Avenue, where many Greek families have burial plots topped with Greek symbols. The names on the headstones are a roll call of Charlotte restaurant history: Kokenes, Tatsis, Economy, Kastanas, Pappas, and more.

Greek Charlotte isn’t ancient history, though. The months since the pandemic shutdown in March 2020 have cut into Charlotte’s Greek heritage, with the closing of restaurants like Mr. K’s, Zack’s, and the Oakhurst Grill (formerly Mr. C’s). But there’s still a lot of Greek to explore.

Little Village: Want a classic gyro? A lot of Greek Charlotteans will send you to this tiny shop on West Trade, two blocks from Johnson & Wales University. The gyros—chicken or beef/lamb—come topped with French fries, but you’ll still want to spring for a side of Greek fries, seasoned with herbs and sprinkled with feta. 710 W. Trade St. (next to the entrance of the Gateway Village parking garage)

The Mad Greek: It’s so Greek that if you listen closely, you’ll hear the kitchen staff arguing in Greek. A little diner with some outside seating, it’s a great place for dishes like Village Salad (no lettuce, just lots of cucumbers, olives, peppers, and tomatoes), souvlaki, and kebabs. 5011 South Blvd. 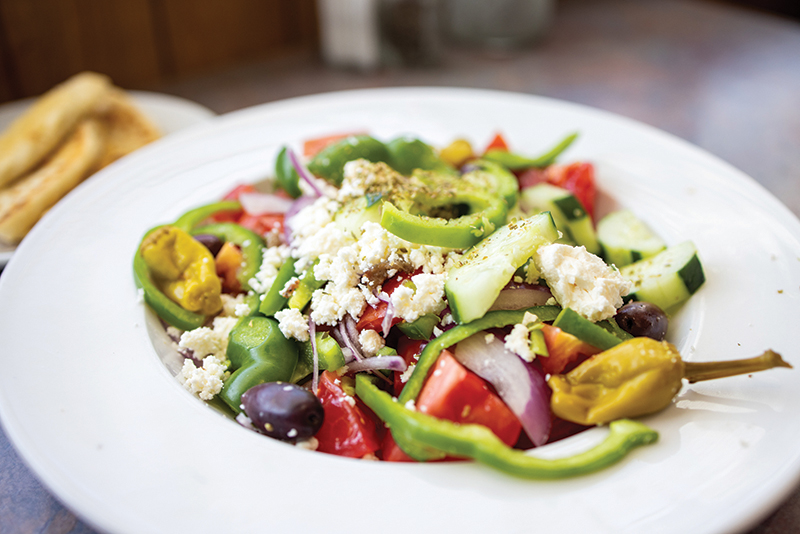 Soul Gastrolounge and Kiki Bistro: Owner Andy Kastanas’ family came here in the 1960s, and both menus show it. Upstairs among Soul’s crafted cocktails and curated small plates, you’ll spot things like saganaki, spicy feta dip, and lamb skewers. Downstairs, the newer Kiki has a lot of Greek flavors with a few French touches. 1500 Central Ave., Ste. A and B

Ilios Crafted Greek: Angelo Kaltsounis and Stratos Lambos won a following with their upscale restaurant Ilios Noche and its Greek-inspired menu. They’ve now gone full Greek with Ilios Crafted Greek, a fast-casual café in South End. The dining room is as bright and sunny as the food. 1514 S. Church St. 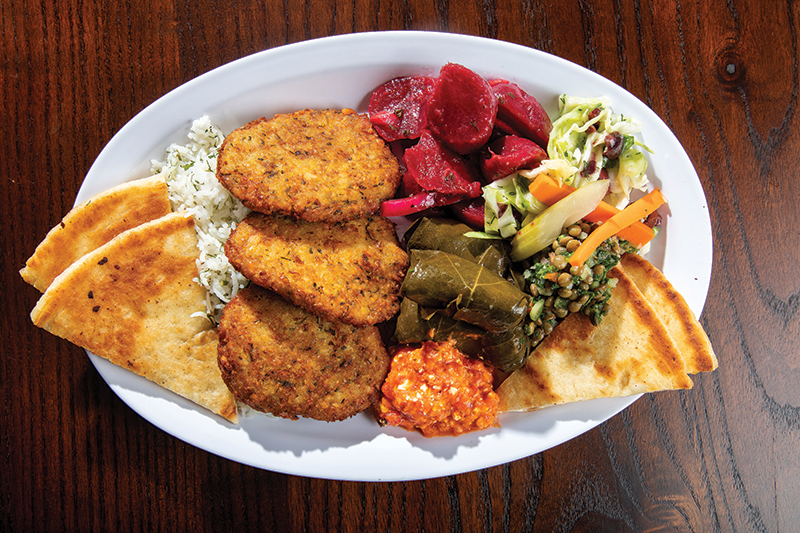 A plate from Ilios Crafted Greek. Photo by Peter Taylor.

Estia’s Kouzina: If you want to turn a Greek-style dinner into an occasion, drive to Belmont in Gaston County and visit Estia’s. Gus Georgoulias, a longtime Charlotte restaurateur, owns the place, which hits the spot between casual and upscale with specialties like moussaka, lamb chops, and grilled octopus. 609 N. Main St., Belmont

Where To Shop For It

Minos Imported Foods: It’s intimidating the first time you go. Pull into the back of a gravel lot next to what looks like a warehouse, and you won’t see the store. It’s in the building on the left, behind the second door. Once you figure it out, you’ll find barrels of brined olives; shelves of spices, canned goods, and cookies; and multiple kinds of feta: from Greek, made with sheep and goat milk, to Bulgarian and American. Oh, and the tinned fish selection. Minos serves both wholesale and retail customers. “Everybody comes here,” says Bobby Makas, son of owner Serafim Makas. “International customers, Americans, locals.” 11016 Monroe Road, Matthews

Agora Greek Market: If you want something more like a retail shop, this small market has shelves of Greek products, freezers full of Greek dishes, multiple kinds of phyllo, and dessert cases that brim with cookies and pastries. 5122 E. Independence Blvd.