Surviving winter and a story of hope

Home/Uncategorized/Surviving winter and a story of hope
Previous Next

Surviving winter and a story of hope

On a recent gloomy afternoon, a loud crack shattered the quiet along the boardwalk at Raven Ridge, The Nature Conservancy’s preserve at the southern edge of Charlotte. An enormous beaver surfaced, breaking through the ice on the marsh beside Rotax Road. A few minutes later, another percussive sound and a second beaver rose out of the murky water, swimming like an icebreaker across the water.

Beavers don’t generally operate in plain sight unless they are not fully prepared for winter. In the fall these rodents must build or repair a lodge, their winter residence, and store a raft of branches that will feed them through the winter. This food supply, weighted down with larger limbs, is accessible under the ice where the beavers can eat, safe from predators.

How do other wildlife neighbors, without woodstoves or heat pumps, survive winter?

Black bears and chipmunks are among the shallow hibernators that are dormant, characterized by drops in heart, breathing and metabolic rate, lowered body temperature, and long periods of inactivity.

A less familiar term is brumation, the hibernation of cold-blooded species. In a previous column, I mentioned a hibernaculum where up to 100 snakes, with minimal body activity, gather beneath the frostline to keep one another warm through the cold of winter. The wood frog, a resident of our vernal pool at Raven Ridge, freezes during winter—no breathing, heartbeat or metabolic activity, with up to 65 percent of the water in its body turned to ice.

Leaving winter thoughts behind, here’s a story of hope—something we all could use in this moment. 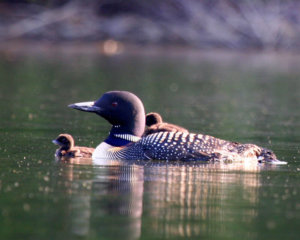 Loons are flourishing in Vermont this year. Photo by Janet Steward courtesy Vermont Center on Ecostudies.

It’s not uncommon for loons to need a rescue, often from entanglements in fishing lines. In early October, loon biologist Eric Hanson got a call about a loon trailing milfoil in Lake St. Catherine. Since 1998, Eric has been the biologist for the Vermont Loon Conservation Project, a joint effort between Vermont Center for Ecostudies and the Vermont Fish and Wildlife Department. A follow-up call indicated that a lure was spotted by the loon’s webbed feet. Wardens from Vermont Fish & Wildlife attempted to capture her, without success. Only when the loon became stranded on the beach was it possible for Hanson to capture her. “What we found,” Hanson said, “was pretty horrifying—a four-inch lure, with treble hooks on both ends, had pierced the webbing on both feet. It was a mess.”

First stop was Vermont Institute of Natural Science’s (VINS) Center for Wild Bird Rehabilitation. Director Grae O’Toole returned to the facility after hours and, with Hanson, worked for a half hour, sorting out how best to remove five barbs from the loon’s webbed feet. “In the end it was my grandfather’s pliers/wire-cutter combo tool that did the trick,” Hanson said.

Treating the loon with antibiotics and for broken toes, Grae realized that more care was necessary. After consulting with loon veterinary specialists, it was decided that if the loon could outswim the wardens’ boat with “both feet tied behind her back,” she was a good candidate for surgery. Not many vets are knowledgeable about surgery on webbed feet, but Judy Herman of Animal Wellness Center in Augusta, Maine, is that doctor. Dr. Herman performed the surgery.

A few days of healing out of the water were followed with swimming time in a pool. Staff noticed that the loon preferred to be in the water full-time, a good sign, and that she was soon diving like other loons. By the end of October, doctors determined that her feet had healed adequately for her to be released. She had also begun to “pace” back and forth in the pool, a sign that she was ready to go.

Before the loon was set free, Lucas Savoy, lead loon biologist of the Biodiversity Research Institute, placed a U.S. Fish & Wildlife silver band on her better leg. On Nov. 7, less than a month from the first phone call, the loon swam into Penobscot Bay, soon becoming a mere speck on the horizon.

May you find reasons for hope in our rich and beautiful outdoors in every season.