Painting murals isn’t just a creative outlet for Kelly Aiken. It’s a physical one. “I used to be a gymnast, so maybe it’s subconscious,” she says. “I get so into it physically. I don’t work out—that is my workout.”

The 31-year-old owner of Copeley Designs does commissioned paintings and murals in private homes and commercial spaces throughout Charlotte. She specializes in gold leaf, a centuries-old gilding process in which she applies gold that’s been hammered into thin sheets over a painting’s surface. “It’s controlling the uncontrollable, which is why I love it so much,” she says. “It’s a hard medium to work in. It’s metal, but it’s so thin—it’s light as a feather.” 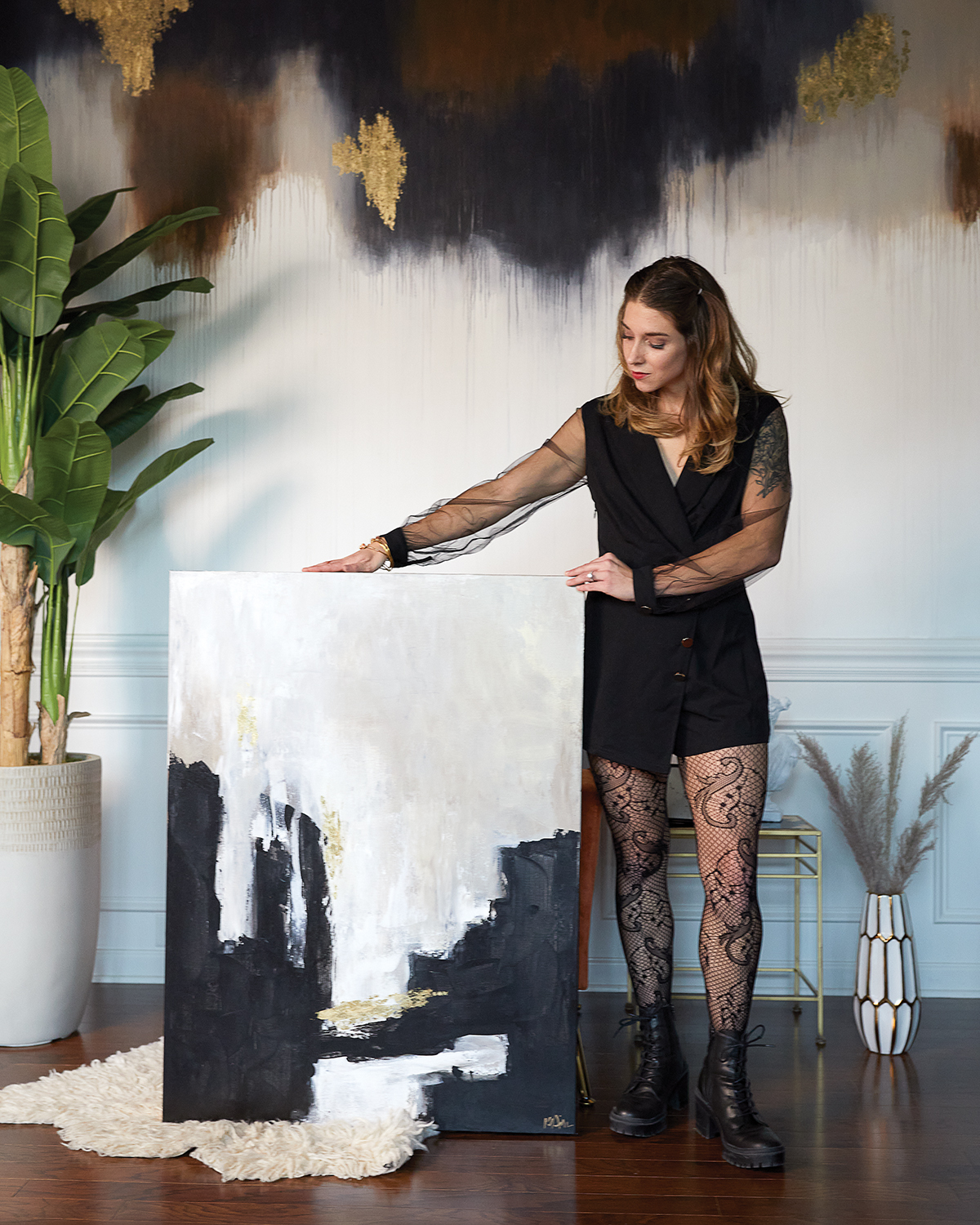 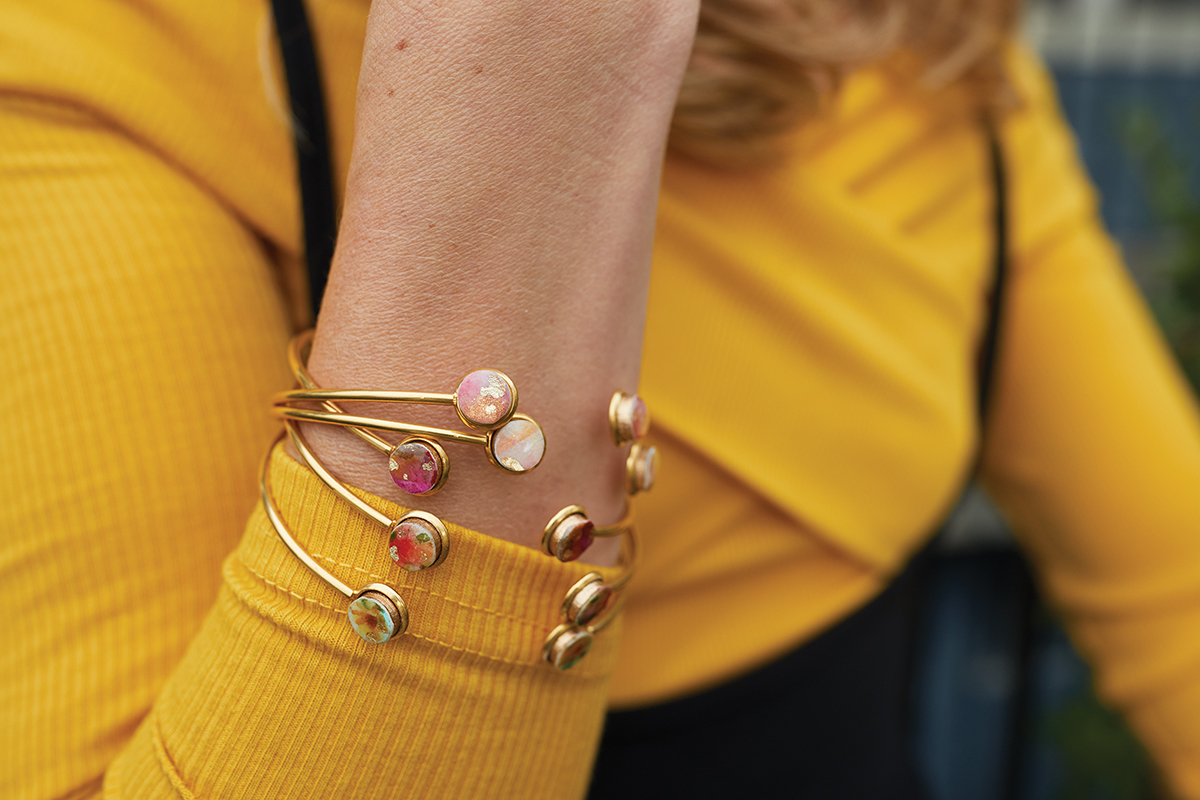 When Liberate Your Palate founder Tamu Curtis opened The Cocktailery in South End last summer, she hired Aiken to add gold leaf to a floral wall mural she painted with artist Amber King. Curtis loved it so much, she hired Aiken to add gold line work to her classroom walls and design a gold martini glass logo. “Large-scale is what I love to do,” Aiken says. “I get a lot messier, and I love that. Normally, I’m in my studio making a mess, but now I’m out in the world making a mess.”

Aiken first picked up the gold leaf technique about eight years ago after a client found her through her Etsy shop. She commissioned Aiken to create a painting and asked her how she could make it “stand out” more. “I’d seen gold leafing and thought I could try it,” Aiken says. But she admits it took a while to learn to manipulate the gold foil and master the gilding adhesive. “It took me a long time to get it not to tarnish; it’s a chemistry.”

It’s also a mental escape for Aiken, who lives with a form of OCD called dermatillomania, a skin picking disorder. “Gold leaf keeps my hands busy so I can’t do that,” she says. “I started painting a lot for my mental health. My mom died by suicide when I was 3, so I do it for her. Art is my therapy.” 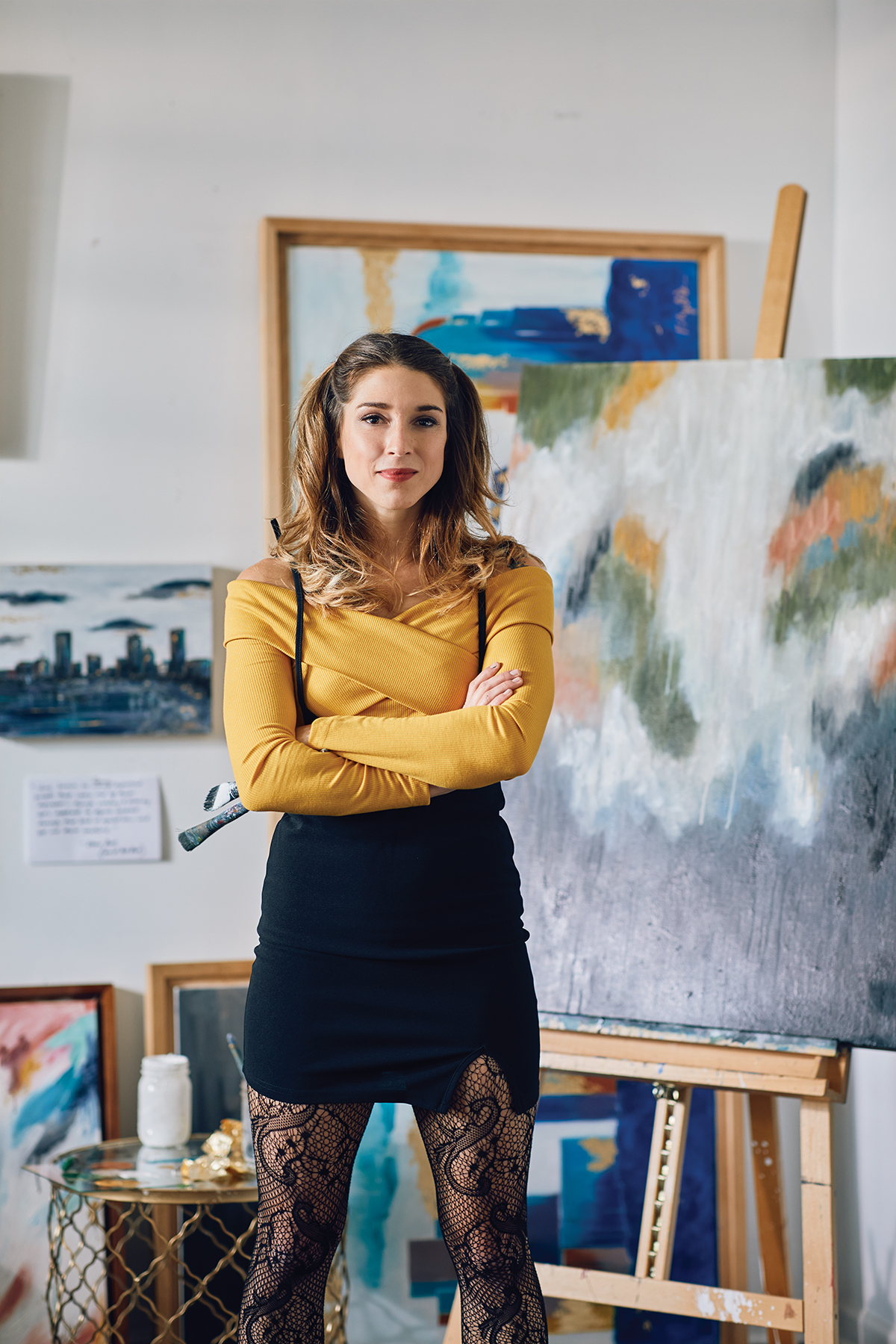 Aiken says she instinctively reached for pens and paintbrushes as a child. She studied architecture at the University of Virginia and got a job at a firm in Boston, but she knew a desk job wasn’t for her. When she met her husband, former NFL player Danny Aiken, the couple followed his career from Boston to New York before they settled in Charlotte. “I was able to change paths,” she says. “When I got creative with my hands again rather than at a computer, I was so much happier.”

In 2016, they welcomed their daughter, Copeley, which inspired Aiken’s company name. She continued to paint, and in 2018 won a design competition at West Elm. The furniture and home decor chain sold a series of her abstract prints, which appeared in their July 2019 catalog. “It helped me a ton,” she says, “but now I prefer to be an original artist and not have my work mass-produced.”

Aiken grew her business through social media, and more clients commissioned her to paint gold leaf murals in their homes. She’s done ombre accent walls, floral powder rooms, and gilded closet murals. “I have two different lists for my commission pricing,” she says. “I’ve got clients who only want 24-karat gold, but most people pick imitation gold when they see I’ve mastered how to not let it tarnish.” 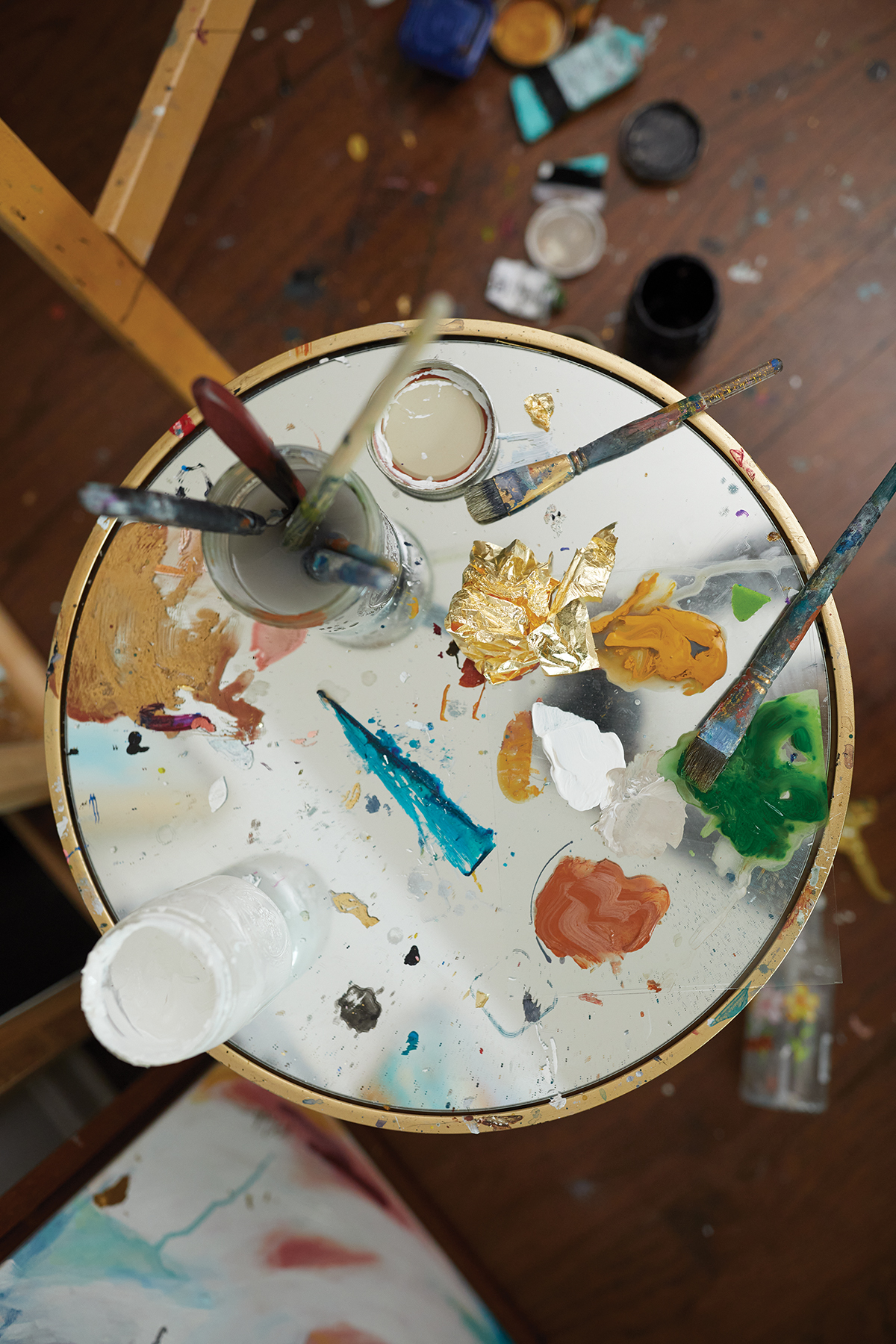 Aiken, who specializes in gold leaf, does commissioned paintings and murals in private homes and commercial spaces throughout Charlotte. 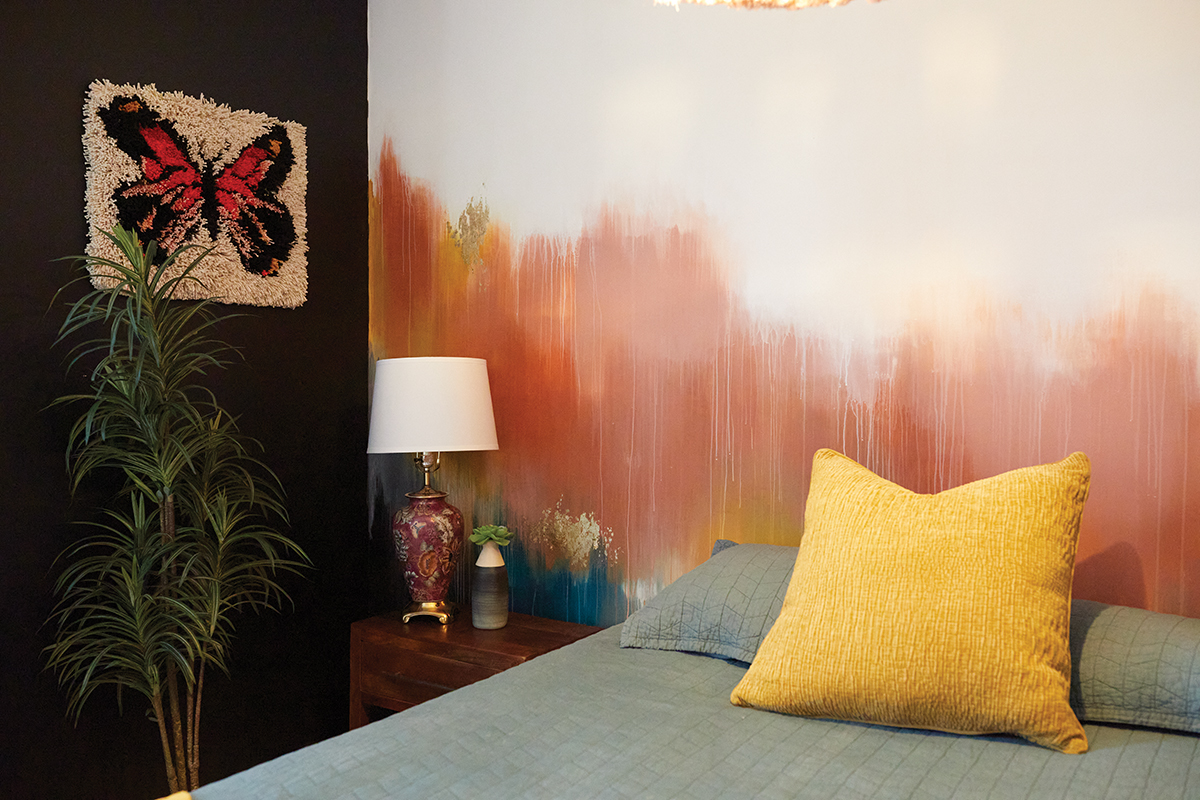 As gold leaf continues to grow in popularity, Aiken has built a following with her TikTok tutorials and SkillPop classes, where she teaches the process to amateur painters. She’s also added a collection of bracelets to her brand, which sold at the Immersive Van Gogh Exhibit Boutique Shop at Camp North End last year. The 8-millimeter gold cuff bracelets each have miniature watercolor Van Gogh-style paintings mounted and sealed with resin.

In May, Aiken will have her first solo show, at the Artisan’s Palate, and its theme is mental health. “With my dermatillomania, mirrors are my worst enemy,” she says. “I’ve had to change some habits to make sure I don’t do that. So my next show will deal with mirrors—I’m adding gold leaf to mirrors.”

Since her success with West Elm, Aiken has donated a portion of her proceeds to the Brain & Behavior Research Foundation, and she continues to speak up about mental health awareness with her students and followers. “Art always brings me back; it lets me have a little control over my surroundings,” she says. “I tell my SkillPop classes, even if you’re feeling angsty while you’re painting, at least you made something cool out of that.”