Stockings, Parachutes, and Artists: The History of Dilworth Artisan Station

Home/Uncategorized/Stockings, Parachutes, and Artists: The History of Dilworth Artisan Station
Previous Next

Stockings, Parachutes, and Artists: The History of Dilworth Artisan Station

The Queen City’s textile story dates back to the 1880s. Dozens of factories here spun cotton and wove it into cloth. NoDa, for instance, began as a cluster of cotton mills.

In 1917, a startup named Charlotte Knitting added a new item to the city’s output: knitted silk hosiery. After a small beginning with men’s hose, they custom-built their own plant at 118 E. Kingston Ave., just off South Boulevard, in 1923. Two hundred workers tended rows of knitting machines in the “elegant new three-story building,” ready to produce, headlined The Charlotte Observer, “Four and One-half Million Pairs of Highest Quality Silk Hosiery Per Year.”

For the hosiery biz, the Roaring ’20s were boom times. “Flapper” fashion swept America. Knee-length dresses daringly showed off a lady’s stockings. Nearby, on Camden Road, a new competitor named Nebel Knitting (the building now holds Byron’s South End) found success in that market. So Charlotte Knitting jumped in, too. The firm launched its own brand in 1927. Queen Charlotte Hosiery quickly won national popularity. “More silk stockings are made in Carolina than any other place in the South,” boasted a 1930 ad.

Then the Great Depression hit. Women had no cash to splurge on stockings. The Queen Charlotte Hosiery brand flamed out as fast as it had risen. The factory kept making stockings, however, under a succession of owners into the 1940s. Charlotte Tent and Awning also used part of the space.

In 1943, deep into World War II, Charlotte Tent won a contract to produce parachutes for the military. Parachutes were made of silk early in the war, but manufacturers later switched to nylon as they ran short on silk. The factory had silk on hand and expertise in manufacturing. Hiring had to ramp up—tough when the draft was pulling men out of the workforce. “WOMEN Here is Your Chance,” trumpeted a job ad. “War orders are waiting—our fighting men are waiting … Help Us Furnish Our Boys With PARACHUTES.” 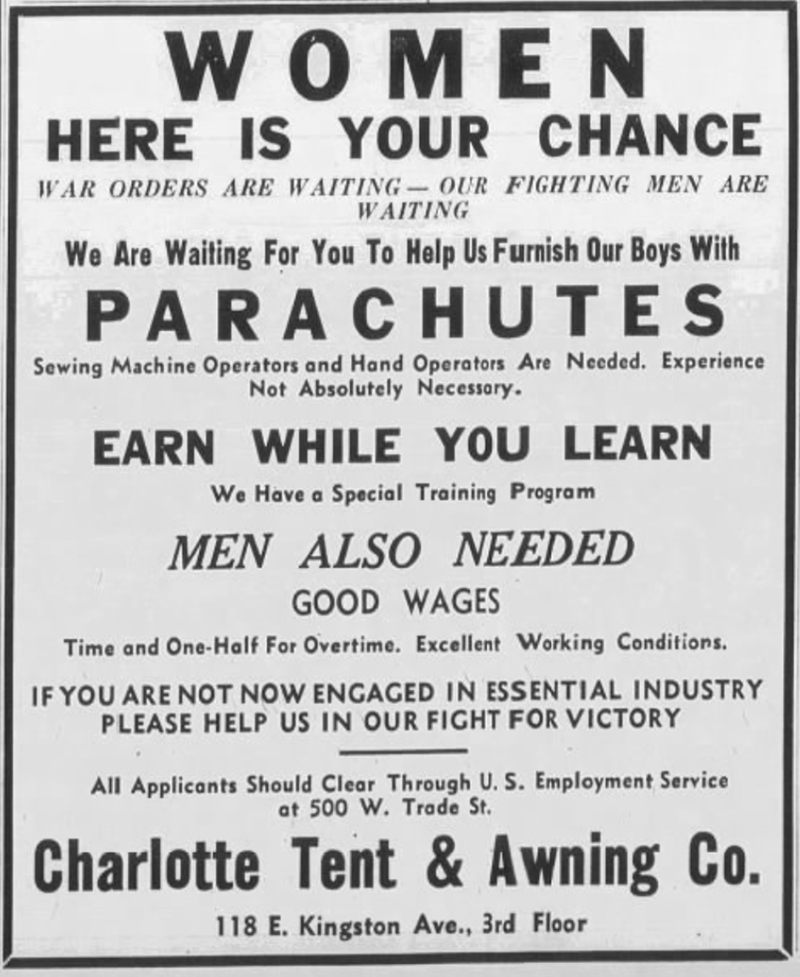 After the war, the building returned to a variety of textile-related manufacturing, including Queen City Mattress. In the 1950s, a two-story wing was added to hold Charlotte Woodworking.

The Fuller family bought the structure in 1987. “A company made bras and panties there, 250 seamstresses,” recalls Dick Fuller. He and his twin brother, Bob, were starting an architectural antiques and furniture repair business they called Crossland Studio. “We had a couple of artists come to us” asking to rent upstairs, Dick Fuller says. “That worked out so well that we kept adding more and more art space.” With new interior walls and delightfully mismatched studio doors, the mill became Dilworth Artisan Station. “We loved the artists.”

In 2019, the Fuller twins, ready to retire, sold to White Point. You know White Point’s work if you’ve been to Optimist Hall, the 1890s cotton mill the company has handsomely renovated for restaurants. On Kingston, White Point has bought up most of the block and plans a high-rise that will face South Boulevard. But, says White Point exec Erik Johnson, Dilworth Artisan Station will stay much as is, with only a new ground-floor restaurant, cocktail lounge, or both in the Fullers’ old workshop space, plus some sprucing up. 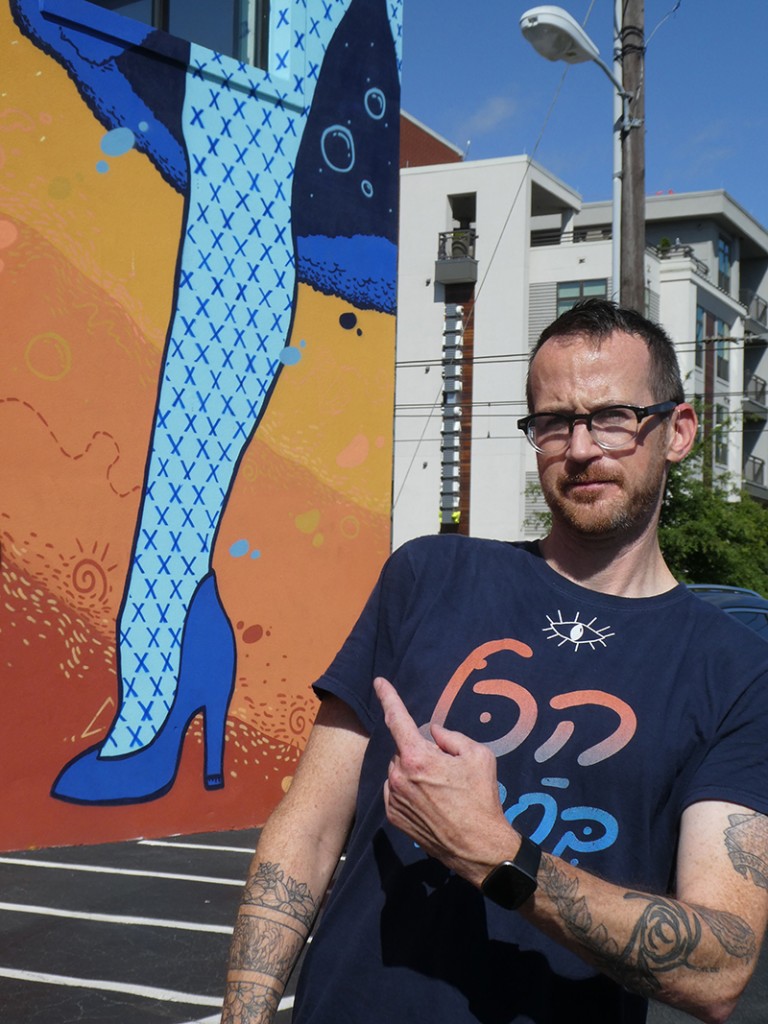 Thus the mural by Mike Wirth. He’s an associate professor of art and design at Queens University and an energetic muralist who co-organizes Charlotte’s annual Talking Walls paint-a-thon (talkingwallscharlotte.com).

“I wanted to honor the history of the building,” he says. Look closely, and you’ll see those stockings, along with parachutes, a woman worker modeled on the famous WWII “Rosie the Riveter,” and more. “I wanted it to be like a memory, fluid and colorful.”