Home/Uncategorized/Sights, sounds, reflections as summer shifts to fall
Previous Next 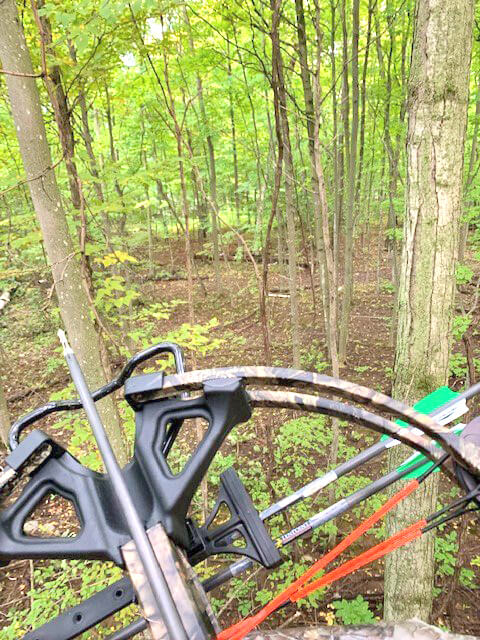 Photo by Bradley Carleton. The view from the treestand.

The anticipation builds through the waning days of September. It is summer’s last gasp of warm southern breeze. The occasional north wind portends the inevitable shift toward the cool nights of October as the earth begins to tilt on its axis away from the sun. Reluctant to relinquish the lush green leaves on the oaks, the staghorn sumac submits to the autumnal rhythm and wears the robe of rainbow colors from a deep purple to crimson red and golden yellows. Acorns have begun to drop on the musty forest floor and hickory nuts blend into the autumn air with the fragrance of sweet woody decay.

I spend as much time as I can afford to sit in my treestand 15 feet above a trail that the wily whitetail frequently uses with a north wind. Occasionally, I will close my eyes and concentrate on the sounds around me. I hear a chittering of a gray squirrel as he chews the hard shell off a white acorn, and then the chips hitting the ground with a sound that imitates arrhythmic raindrops. I concentrate on the breeze blowing gently from behind me and notice the slight chill as it caresses my right cheek. Breathing in deeply, I catch a whiff of the lake turning over the detritus of dying weeds from under the shallow waters of the bay. My ears are piqued to hear the sound of a twig snapping, a wheeze or a snort of a buck as he lifts his majestic head to catch the scent of whatever might be in front of him further down the trail. I open my eyes and scan the terrain.

The peripheral vision of my left eye catches movement in the canopy above. I watch a squirrel make a bold leap from his launching branch intending to land on his new target branch. He misses and drops 30 feet to the ground. I think to myself, “That has really got to hurt!” As I jump to the erroneous conclusion that this will be the end of this little bugger’s life, he stands up and shakes his sinewy body as if to say, “Oops! No big deal. I’m a squirrel and thank the Great Spirit that no one was witness to this embarrassing moment, I will just go on about my business like it never happened. Besides, no one saw that, right? Well, maybe that guy in the tree over there.” I reassure him that I won’t tell anyone. But here I am sharing this poignant moment with you, my reader. Why? Because it emphasizes that in nature, there are no judgements. No animal complains about the challenge of living in the outdoors. They accept what life offers them and proceed to follow their instincts.

Minutes later, the pileated woodpecker announces his intention to pass through this little “channel in the woods.” Every day that I sit in this stand, he passes through at about the same time. He flits from tree to tree, checking the tender cambium beneath the bark for the miniscule vibrations of insects feeding. He taps a few quick beats and pauses. Then, again. He flies from tree to tree no more than 20 yards apart until eventually the sound of his pecking fades into the natural rhythm of the woods.

I sit, content to watch these miraculous happenings, as silent and motionless as I can. I am pretending to be a part of the tree that supports me in my stand. Moments of silence pass and the strain of listening to the resounding silence is causing my ears to feel like I am feeling the vibrations of the earth beneath when the snap of a distant twig awakens me from my meditation. My eyes pivot from side to side, surveying the trails that intersect in front of me. Double checking my arrow is properly knocked and my peep sight is aligned with my sight pins, I clamp the wrist release on to the bowstring and take a deep breath. Once again, my peripheral vision is activated. My right eye catches a patch of brown between a tree and some shrubbery about 40 yards away. Then an eye and the lower part of a leg.

It is clearly a deer, but I am not sure if it is a doe or a buck. Where I hunt, the landowner has requested that we harvest a doe before we take a buck, because the ratio is very unbalanced, and the herd is too large to sustain itself through a rough winter. Also, for this many deer to be on this property it requires sound scientific management. They are decimating the native species of trees, leaving only the invasives. The farm grows winter wheat and occasionally other grains, and the crops are getting eaten at a rate that the farmer loses thousands of dollars a year to predation. This is clearly an example of the need for humankind to remain a part of the circle of life. The earth needs both predators and prey to remain healthy. We sustain each other.

As the brown patch begins to add additional anatomical reference points, it is clear that this deer is headed down the trail toward me. I close my eyes and breathe deeply through my nose. When I open my eyes again, the deer lifts its head above a shrub and shows me its crown of bone, held high, in a stately manner befitting a king. It is a good-sized buck and as I count the points on the antlers, I realize that even if he walks directly under my stand, I will not shoot. Today, he gets a pass. I say a quick “thank you” to him as he marches proudly in front of me. He stops suddenly, directly below me and just 10 yards out front, and looks up at me with knowing eyes, as if to say, “Thank you for being a gentleman.”

(Bradley Carleton is executive director of Sacred Hunter, a non-profit that seeks to educate the public on the spiritual connection of man to nature.)