Served History: The Story Behind Kopper Kettle in Pineville

Home/Uncategorized/Served History: The Story Behind Kopper Kettle in Pineville
Previous Next

Served History: The Story Behind Kopper Kettle in Pineville


Saradina Morris didn’t plan to spend her life running a small café surrounded by warehouses and industrial parks outside Pineville. She had a perfectly good career already, as a counselor.

When her dad, George Karnezis, had a stroke in 2014, she stepped in to run her parents’ restaurant, Kopper Kettle, until they were back on their feet.

She never left. It turns out running a café filled with regulars suited her.

One of her main reasons for staying is the time she gets to spend with her dad. He opened Kopper Kettle with his wife, Penny, in 1971, when their stretch of Nations Ford Road was miles of open fields and a few trailers. 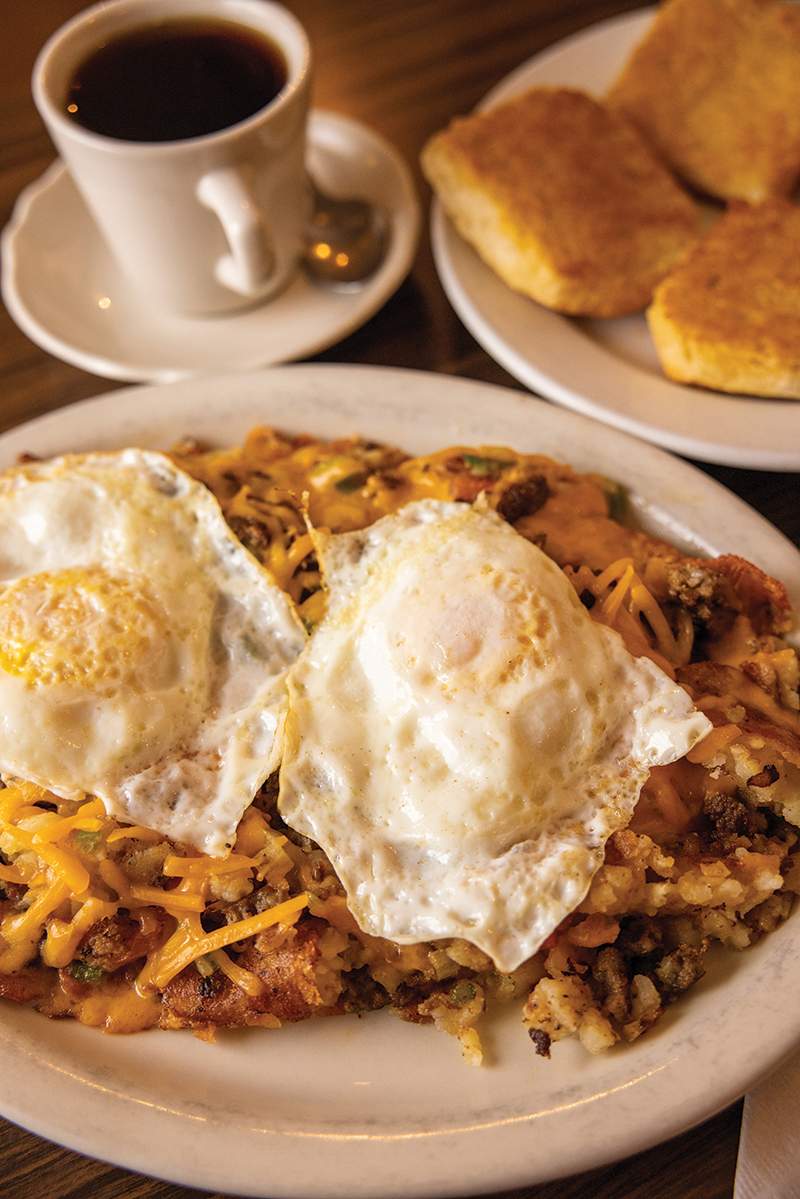 The Original Smash Pot is, er, a heart-healthy heap of potatoes, cheese, onions, peppers, tomatoes, and sausage or bacon.

Most days now, Morris picks him up and brings him to the restaurant, where he spends the morning talking to customers, telling stories, and eating his lunch. For Morris, it’s a precious chance to savor her dad’s company. She’s got a whole sheaf of notes in a drawer by the cash register with things her father, now 84, tells her.

Both George and Penny came from Greece in the 1960s. One of George’s early jobs was as a busser at The Open Kitchen on Morehead Street. He was there on the infamous night in February 1967 when Speros Kokenes, who owned The Open Kitchen with his brother, Steve, was carjacked and murdered in what was believed to be a botched armed robbery. It remains one of Charlotte’s most famous unsolved murders.

The Kopper Kettle used to serve breakfast, lunch, and dinner. It had a liquor license and a lively bar, but by the late 1990s, George and Penny decided to serve just breakfast and lunch. Today, the restaurant’s walls are covered with memorabilia, like caricatures of George and a former chef and waiter juggling dishes and rushing around, with captions in accented English. At least nine copper kettles are tucked throughout the restaurant, as well as copper art, including a hammered version of “The Last Supper.”

Spelling copper with a K was George’s idea, Morris says, because there’s no C in the Greek alphabet. Like most children of Charlotte’s Greek community, she attended Greek school to learn the language and culture, and she’s made trips to Greece to meet extended family. When Penny calls during our interview to find out what time Morris will pick up her dad, the conversation is half in Greek, half in English. 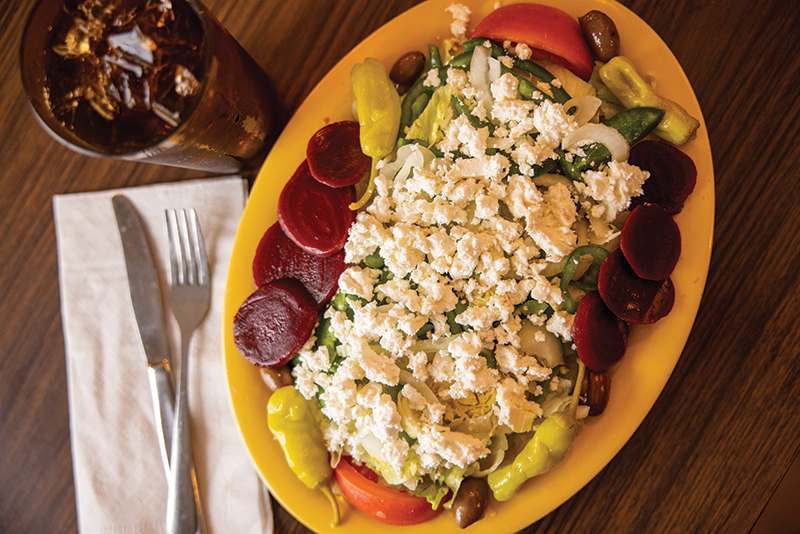 The Greek Salad (above) is so massive, it comes on a platter. The dining room (below) opens for breakfast at 5 a.m. 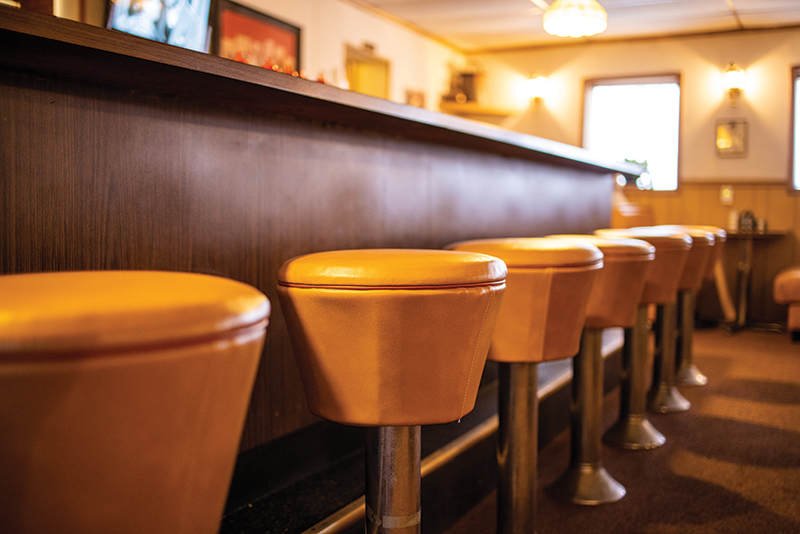 In the years since she took over for her parents, Morris hasn’t changed the menu much: biscuits and egg platters for breakfast, along with a signature dish, The Original Smash Pot, a heap of potatoes topped with cheese, onions, peppers, tomatoes, and sausage or bacon. Lunch is salads and sandwiches, including Kopper Kettle’s own version of a Philly cheesesteak, with tender chunks of pot roast under a blanket of melted provolone and a side of au jus.

Morris takes pride in the large portions. A Greek salad arrives on an oval plate that anyone else would consider a platter. “They’re heavy-handed in the kitchen,” she says, “and I like that.” 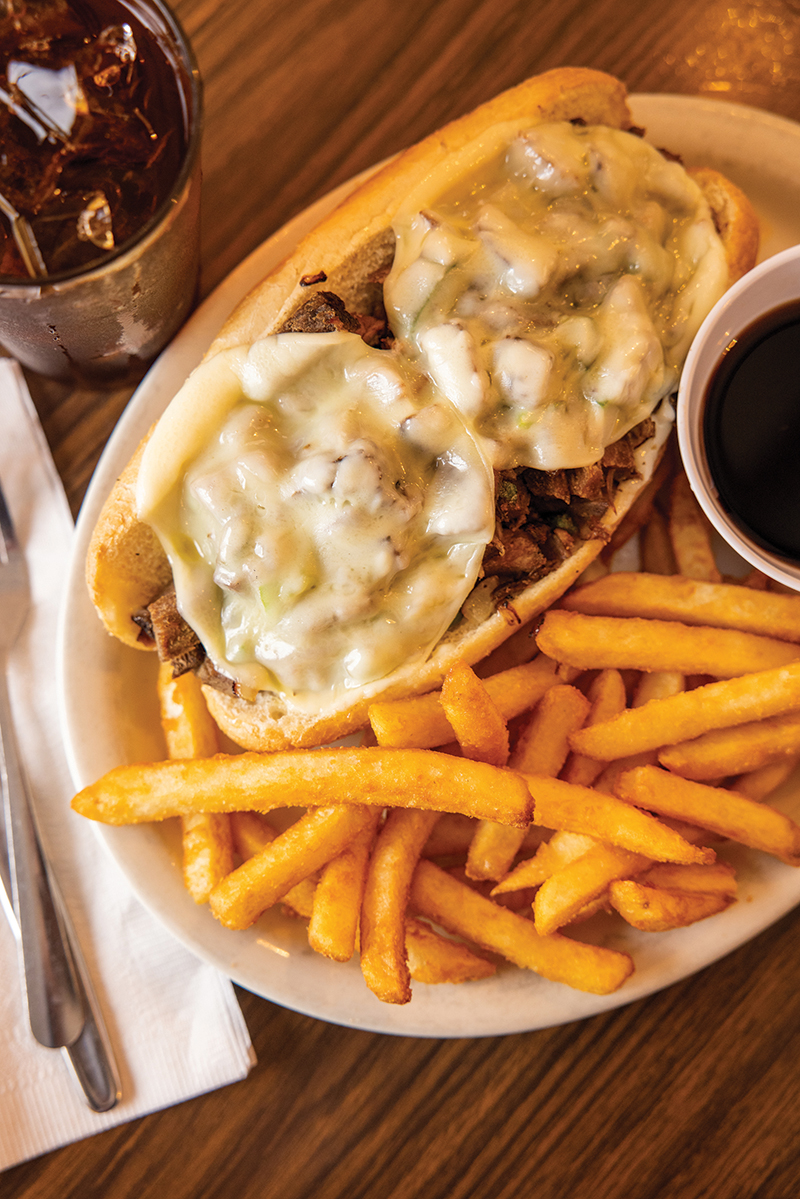 Kopper Kettle’s version of a Philly cheesesteak, with pot roast (!) and au jus (!!).

COVID brought some changes, of course. They were only open for takeout for a few months, then reopened with half the seats taped off. “I get emotional just talking about it,” Morris admits. Many of her regulars are police officers and firefighters. She used to comp their meals, but she can’t afford to do that anymore. The high cost of ingredients has taken a toll. Still, she does big business on Saturday mornings, when Pineville families come in for breakfast.

So how is being a counselor similar to running a restaurant? “That’s a loaded one,” she says, pausing to think it over.

It’s her ability to listen, she finally decides. People really appreciate it when you listen. “If everyone in the world would stop and listen,” she says, “it would be a better place.”

KATHLEEN PURVIS is a longtime Charlotte writer who covers Southern food and culture.