The Selectboard met on December 23 to discuss possible actions to be taken in response to the fire and destruction of the Lewis garage and equipment on December 22. Controlling the fire required a response from several neighboring town fire departments, 100,000 gallons of water, and a year’s supply of foam. It was still smoking the following day.  The fire destroyed the garage and all of the trucks and equipment stored there, including several snow plows and trucks.

Jr Lewis announced that Governor Scott had directed the Vermont Agency of Transportation to work with the Town to loan snowplows and other equipment needed. The Town now has three snowplows to use in the upcoming Christmas storm and for the rest of the winter. 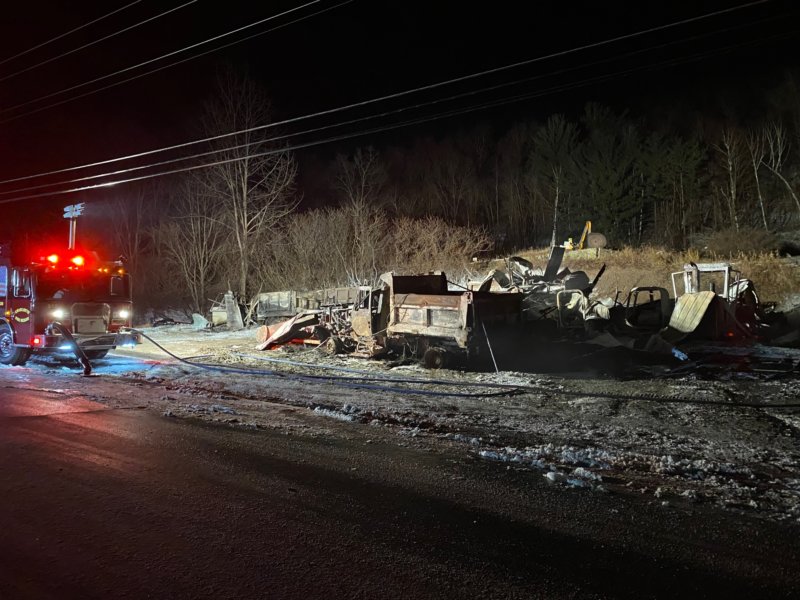 The fire at Lewis Excavating’s garage on Church Hill Road was destroyed along with all of the trucks, equipment and several snow plows. Photo contributed

The wide-ranging discussion began with offers of assistance for Jr and his crew.  Town officials have received many calls from people offering to help. Among the statements were tributes to Jr for his life’s work keeping Charlotte roads safe and passable.  During the meeting. Francis Foster suggested that a Go-Fund-Me page be created on behalf of Jr and his crew to replace his equipment and for other needs. Jr said he appreciated the offer, but preferred that the Town focus on building a new garage.

The discussion moved to the question of whether to build a new Town garage, where it might be located, and how to pay for it. Will Bown suggested that the Selectboard ask for community expertise and create an ad hoc advisory committee to examine the range of issues.

The Selectboard agreed that a new garage should be built.  They concurred with forming an ad hoc advisory committee of community members immediately.  The goal is to break ground on town-owned property by August or September. Because motions cannot be made in emergency meetings, the decisions will be adopted formally at the next regular Selectboard meeting on January 3, 2022.