Room We Love: A Tween’s Bedroom-Lounge-Workspace in Fort Mill

Home/Uncategorized/Room We Love: A Tween’s Bedroom-Lounge-Workspace in Fort Mill
Previous Next

Room We Love: A Tween’s Bedroom-Lounge-Workspace in Fort Mill


Jacy Painter Kelly has designed plenty of children’s rooms over the last decade, but a recent project for a 12-year-old girl schooled her on an emerging design trend among tweens and teens. “She wanted her room to have a lot of backdrops for TikToks and Instagram,” Kelly says, “so we used three different wallpapers.” The girl’s suite was part of a new build in The Ridge at Fort Mill, a community of custom homes on 1-acre wooded lots. The homeowners wanted to give their daughter a space where she could sleep, study, and host friends. “She wanted it to be a really fun space to grow into as a teenager,” Kelly says. “This room is truly like an apartment.” 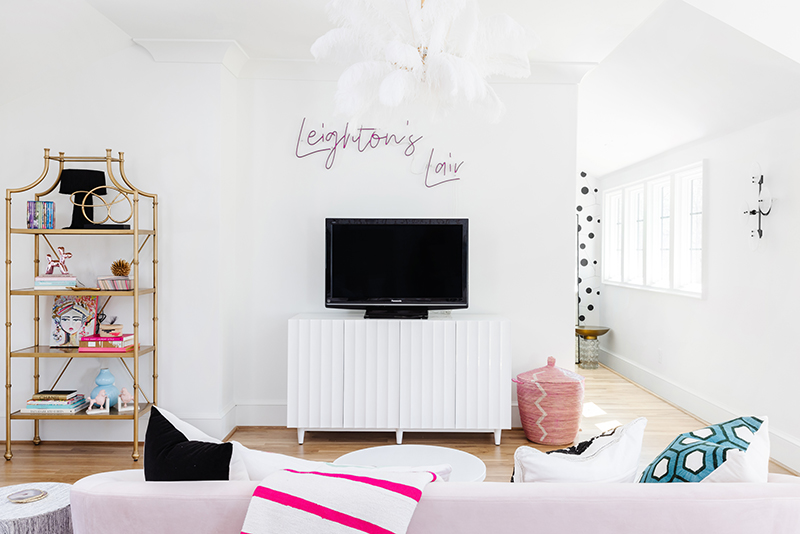 “The different wallpapers really bring the ‘wow’ factor,” Kelly says. “If the whole space was painted white, it wouldn’t look this cool and pulled together.”

THE SUITE LIFE
Kelly worked with the homeowners and their architect to design this suite while the house was being framed. They planned for two queen-sized beds, a lounge area with a sofa and TV, a built-in desk that could double as a makeup station, and a full bathroom with a walk-in shower. “She also wanted to have a hanging chair,” Kelly says. “Luckily, we had the perfect spot for that tucked away in the dormer, because those can take up a good bit of space.”

HIT THE WALL
To make the room Instagram-ready, Kelly chose an arrow print wallpaper from Katie Kime for an accent wall behind the bed. A black-and-white mobile pattern from Livette’s Wallpaper adorns the study and makeup station. In the bathroom, Kelly opted for a peel-and-stick painted lips pattern from Tempaper. “We wanted it to be cheeky but not too feminine,” she says. For another custom (read: Instagrammable) touch, they spelled the word “hey” in black and white tile on the floor of the shower.

THINK PINK
For the beds, Kelly chose gray velvet upholstered headboards from TOV and pale pink bedding from Hygge & West. The blush velvet sofa, also from TOV, holds a mix of pillows from Lacefield Designs, Design Legacy, and Surya. A multicolored Loloi rug complements the patterned pillows, and two feathered Regina Andrew chandeliers add another pop of glam. “This is a girl who loves makeup; she’s super girly and a little edgy,” Kelly says. “Mixing all those textures and patterns is so fun, and she won’t outgrow it anytime soon.”