Home/Uncategorized/Room We Love: A Dining Room-to-Home Office Conversion
Previous Next


Designer Lynne Clark converts the space in a Woodbridge colonial

Lynne Clark’s clients bought their Woodbridge colonial as a starter home when they were newlyweds. They hired Clark & Clark Interiors to add a half bath and soon struck up a friendship with the firm’s owner and principal designer. Over the next 15 years, the homeowners had two children and enlisted Clark to remodel nearly every room in the house, including a dining room they converted into a home office. “As this family evolved, their needs for the home evolved, too,” Clark says. “Once (the homeowner) began working from home, she wanted a bright, cheerful, functional office.”

BAIT AND SWITCH
The space was a formal dining room with sage green walls, chair rails with wainscoting underneath, and traditional Queen Anne-style furniture. Clark brightened up the walls with Benjamin Moore’s Simply White and installed a black floor-to-ceiling bookcase with beadboard paneling that she painted misty green. She added a bamboo Roman shade to the window and framed it with four geode prints from Wendover Art. 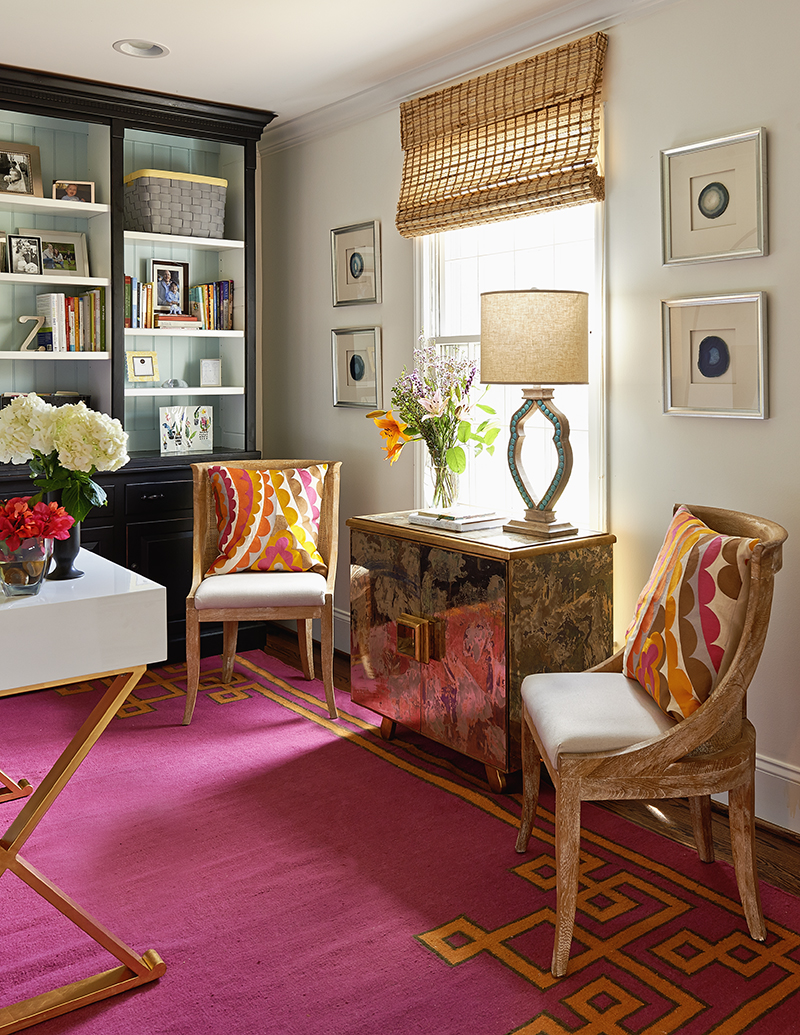 SOMETHING BOLD
Clark built her color palette around the hot pink Surya rug. “The homeowner was hesitant about the pink rug at first, so we gave her some visual examples of how pink and orange felt, and she signed on pretty quickly,” she says. The white lacquer desk and gold Lucy chest came from Worlds Away, the accent chairs from Bungalow 5, and the desk chair from Crate & Barrel. A pair of tulip prints from Trowbridge Gallery hangs behind the desk, and a Cabochon lamp with a turquoise base from Emporium Home adds a subtle pop of color.

PAPER TRAIL
Clark says the biggest challenge of this project was sorting through mounds of papers and creating enough storage for the homeowner’s folders, files, and products. “We had to decide what she needed access to and keep everything that’s out on display looking neat,” she says. A curated mix of books and framed family photos dot the bookcase, creating a personal but not-too-cluttered vignette.