After more than two centuries the weathered white building at the corner of Spear Street and Hinesburg Road in East Charlotte will finally become a tavern.

Built in 1810 as a tavern, the house in the center of the village has been a home for almost all of its existence, said Dan Cole, president of the Charlotte Historical Society.

The house sits on just over 15 acres Jonathan Maguire bought from Clark Hinsdale at the end of May for $625,000.

Hinsdale had planned to build senior housing on the property, but lost enthusiasm for that project after the defeat of two articles intended to spur economic development in East Charlotte in the spring 2021. He said articles 6 and 7 would have helped but were not necessary to his development plans.

“The whole East Charlotte zoning brouhaha and some of the personal attacks — I just simply decided that I just wasn’t going to put up with that anymore,” Hinsdale said.

Twenty years ago, Hinsdale wouldn’t “have shied away” from the fight but now feels like he’s too old for that kind of battle, he said.

Although the property wasn’t for sale, Hinsdale decided to sell it to Maguire: “I was very satisfied that there was a new owner coming along that kind of shared my values and shared my point of view about what that property on the corner could contribute to making East Charlotte better.”

Maguire is just concentrating on the property where the 1810 house sits for the time being and will decide what to do with the rest of the property later. He is renovating the house into a restaurant which he will lease to someone else. The kind of restaurant and what sort of food it will serve will be determined by the eventual tenant.

Maguire said he plans for the restaurant to occupy both the first and second floor of the house, but what sort of food will be served will be decided by the tenant. He expects it will seat 50.

The design of the old house is consistent with old taverns with a large first floor room for dining and drinking and a second floor with four rooms off a central hall, Hinsdale said. 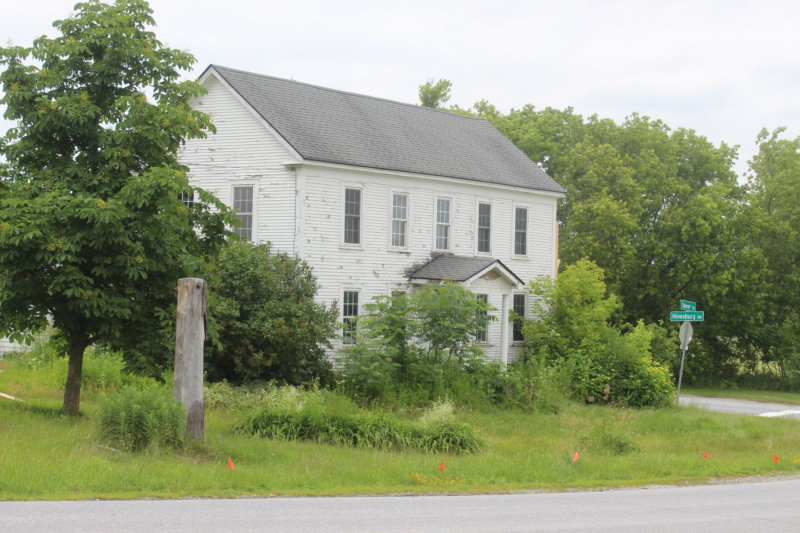 Photo by Scooter MacMillan. It doesn’t appear the house built in 1810 as a tavern actually was a tavern for many of its more than 210 years.

Maguire had hoped to renovate an old barn near the house and put an accessory dwelling there, but found the structure too dilapidated to be restored and tore it down. He plans to rebuild on the barn’s footprint a building designed to look like an old barn but with a living space.

Maguire was motivated to purchase and renovate the house by the lack of a bar and restaurant in Charlotte.

The reaction he’s received from residents of East Charlotte has been positive, Maguire said, “There’s an appetite for it.”

Alex Bunten lives next door, just south on Spear Street in a home renovated from the Baptist church that was built in 1807 which gives the intersection one of its names — Baptist Corners.

He was part of the opposition to the articles proposed last year. Bunten said he wasn’t opposed but was waiting to see how he felt about the project until after he talked to Maguire.

Later, after they had talked, Maguire said he agreed to put in a buffer of trees between their properties.

“I’ve talked with all the neighbors and they’re all cool,” Maguire said, adding his plan for the property is 100 percent in line with Charlotte’s town plan.

He’s already gotten a permit to raise the house and put in a new foundation which he expects to start in a few weeks.

Maguire is the husband of Andrea Regan of the Charlotte Health Center. Her practice’s plan to build a new facility in West Charlotte ran into a good bit of opposition, but that doesn’t discourage Maguire. Every project is unique, he said.

Although the house, that many refer to as the Sheehan house after the family that lived there for years, was intended as a tavern, it wasn’t used for that purpose immediately after it was built.

Here is William Wallace Higbee in 1897 talking about the house in one of his historical essays collected in “Around the Mountains”: “Mr. Martin built the house now owned by Mrs. Henry Claxton and this also was destined for a tavern. William O. Barker bought it in an unfinished condition and after completion ran a public house here.”

It appears Mr. Martin’s plans for a tavern were thwarted through the machinations of Hezekiah Barnes.

Mr. Martin built the planned tavern “on spec” as we say today. A north-south stagecoach route was being planned to come through East Charlotte on what is now Spear Street. But, Cole said, Barnes had other plans for the route.

Barnes, a U.S. militia captain turned road surveyor and an early settler in Charlotte, was a state legislator at the time the stage coach route was being planned. Because of his clout in the legislature, Barnes was able to stop the proposal for the route to run down Spear Street. Instead, Barnes got the stagecoach route moved more than 2 miles to the west where Church Hill Road comes south from Route 7 and intersects Hinesburg Road at the Charlotte Museum.

Barnes owned a tavern on the northwest side of that intersection. That building was sold to the Shelburne Museum and moved there in 1949. It’s the building there that’s now named the Stagecoach Inn.

So, the planned tavern in East Charlotte sat unfinished for 10 years or more until Barker bought it and finished it in the 1820s. And it appears it didn’t function as a tavern for too many years.

For most of its existence, the house has been a home, but now it looks like it will be a tavern — or at least a restaurant with a bar.