Home/Uncategorized/Paper birch: a profile – The Charlotte News
Previous Next

Paper birch, also called white birch (Betula papyrifera), stands out: even if you don’t know a hemlock from a sugar maple, chances are that you can pick out its iconic white bark shining through the forest. Paper birch captivates people across North America, with an expansive range stretching from northern states into the Arctic, from coast to coast.

The defining characteristic of paper birch is its striking white, peely bark, a feature whose undeniable uniqueness is reflected in its various names. The word “birch” comes from the Old English word birce and the proto-Germanic word bhereg, meaning to “shine white.” The Abnaki call it maskwamozt, which refers to how the bark peels—in broad, horizontal sheets (hence the “paper” in its common name).

The woods of Chittenden County also feature several other birches: yellow birch, black (“sweet”) birch and grey birch. From yellow birch’s golden metallic bark to black birch’s grey-black blocky bark, each of these species is distinct but still very “birchy” in appearance. Birches are part of the diverse Betulaceae family, which includes other local species, like hop hornbeam (“ironwood”), alder and beaked hazelnut. 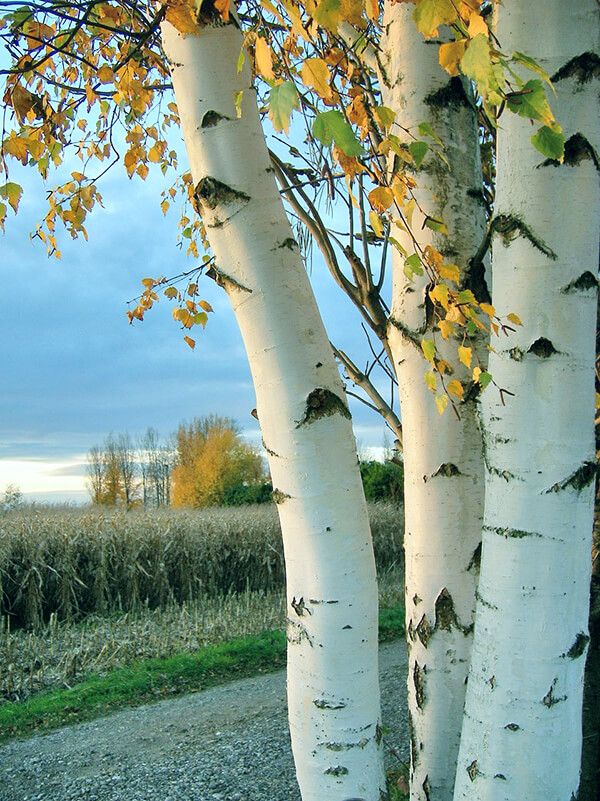 Paper birch bark is rich in betulin, a chemical that makes it both flammable and water-resistant. It has massive cultural importance, used by indigenous peoples in northern climes to make canoes, roofs for shelter and a variety of waterproof containers—including the predecessor to the modern-day sap bucket. Recent examination of betulin has revealed an array of other potential medicinal uses, from treatment of cancers to AIDS, tuberculosis, herpes, type 2 diabetes and more.

The wood of paper birch is beautiful when sawn into boards. It has been used to make plywood veneer and a wide variety of specialty items, from thread spools and tongue depressors to clothespins and toys. Contrary to popular belief, it makes great firewood, with a higher BTU value than black cherry or red maple.

Paper birch is one of our “shade-intolerant” tree species, a group that includes all the poplars, pin cherry and others. Shade-intolerant species need lots of sunlight to thrive, and so usually only establish in openings at least a couple of acres in size. For this reason, a paper birch tree is usually one of many, a whole generation of trees growing in response to a large-scale disturbance. If you can determine the age of the paper birch trees in your woods, you can infer when that disturbance occurred.

Paper birches produce tons of small seeds which can be carried far by the wind. While most of these seeds will not land somewhere suitable—a large, fresh opening in the forest—some of them invariably will. Once established, paper birch’s strategy is to live fast and die young; they grow at an incredible rate, often out-competing other tree species for light and space. However, their dominance doesn’t last long, as their natural lifespan of 60 to 80 years is short for a tree.

The role that paper birch plays in our forests is somewhat ephemeral but nonetheless critical. They grow in destabilized areas, often in forests reeling from some large natural or human-caused disturbance. By establishing in these areas, paper birch helps protect soils from erosion and the loss of soil nutrients, safeguarding the fertility of the forest for future generations of trees and plants.

Foresters manage for paper birch as part of “early successional” or “young forest” habitat, a diverse mix of tree, shrub and plant species that grow in the 20 years following a large-scale disturbance. This valuable habitat provides unique opportunities for critters from neotropical songbirds to bears and pollinators like butterflies. Creating early successional habitat may require cutting most or all trees in an area at least two acres in size, something which is not to be taken lightly—a consulting forester can help you consider how early successional habitat can be part of a broader forest management strategy that maximizes its benefits and minimizes its risks.

The next time you see paper birch and think of its beauty, think also of its cultural importance, its utility, its ecological role, what its presence tells us about our past. Then look at the rest of the trees in the woods—each of these species is equally important, equally complex, equally worthy of our appreciation. Growing together, they form the forest: something vital, profoundly important and greater than the sum of its parts.

Ethan Tapper is the Chittenden County Forester for the Vermont Dept. of Forests, Parks and Recreation. To see what he’s been up to, check out his YouTube channel, sign up for his eNews and read articles he’s written.