It is not often a minor town can claim as a major icon a person who obtained his or her first step on the path to national notoriety in Charlotte. John Dewey as he appeared when teaching in Charlotte, public domain.

In the previous article, we visited School No. 5, the small school in the West Village, but this time we travel a short way down Greenbush Road — from the little red one-room schoolhouse south of the Four Corners to a larger multi-floor school, now a private residence.

The first school on this site was the Charlotte Female Seminary, a select or private school organized in 1835 by Dr. Luther D. Stone. It was purchased by the Methodist Episcopal Society in 1840 and was in use as a select school until it burned in 1880.

The society also constructed their church in 1840, which was associated with the school. The church was moved to the Shelburne Museum and is now known as The Meeting House. 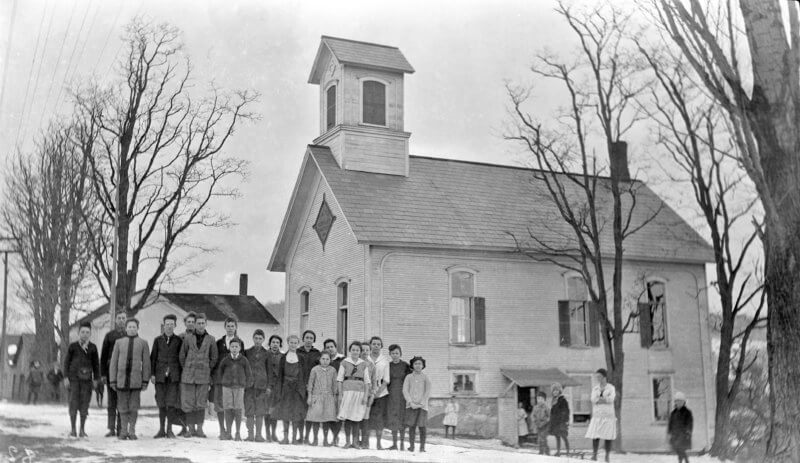 The new school dubbed the Lakeview School would become part of the Charlotte District School system in 1895 and remain so until the district centralized in 1949. We still have several town residents who attended the school in the 1940s.

When the school was rebuilt after a fire, the subscribers enticed Burlington-born and recent University of Vermont grad, John Dewey, class of 1879, back from Pennsylvania to be the first principal of the new academy for the winter term of 1881-82. It is believed he was boarded at the parsonage, the brick building next to the school.

During his three years of teaching, Dewey began to develop new philosophical concepts for enhancing a student’s experience, but quickly felt himself confined by classroom instruction.

He entered Johns Hopkins University for advanced training and developed into one of the leading educational philosophers in academia. Dewey is recognized as one of the most cited and influential education philosophers and psychologists of the early 20th century. His first alma mater, the University of Vermont, honored his life achievements by naming one of their buildings John Dewey Hall, which houses the psychology department.

People outside of educational circles may not know his name but probably were taught under his precept of “pragmatism.” My mother (UVM ’43), a longtime teacher, explained the idea simply as “learning by doing.” The theory first took root here.

For more about the history of Charlotte’s schoolhouses, you can check out our library’s website.