“So right now, I’m doing the final cleaning process for the yeast tank,” says Greg Gadai, a 26-year-old with blond locks that curl from beneath his cap.

He’s hunched over a laptop near a set of colossal stainless-steel tanks that resemble sawed-off grain silos. On the screen is a diagram of virtual pipes that connect virtual tanks. “And that should be done in about nine minutes. And then I’ll send in purified air and push out all the sani, and then we will be ready to go.”

“Oh—sorry. Sanitizer.” I’m an avid beer drinker, but I apparently need a brewing glossary. “So we have a CIP scan right here—CIP just stands for ‘clean in place.’ So the four tanks that you just passed correlate to this. And we’ll run chemicals through, where it’ll kind of push in chemicals for about 25, 30 seconds, and then I’ll draw the chemicals back out, so we’re actually able to reuse chemicals throughout multiple different processes.” 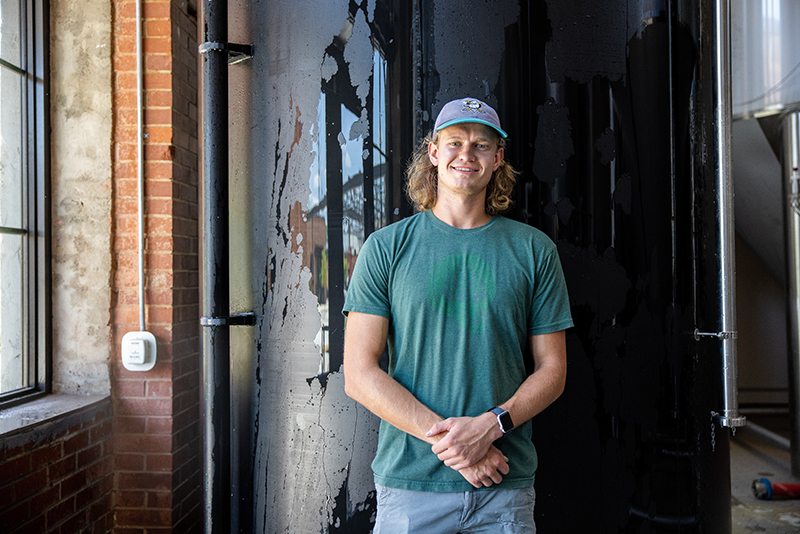 Greg Gadai, Legion Brewing’s quality control technician, works alongside a small team of brewers and packagers in the back of Legion’s new brewery and taproom on West Morehead Street. “For the most part, I mean, nobody’s coming back here,” he says. “Like, nobody’s really bothering us.”

We are, believe it or not, in a brewery, the Legion Brewing location that opened in May on West Morehead Street. It’s just before lunchtime on a weekday in May, and a crowd already begins to take seats at the taproom’s tables and bar. I surmise that few if any care about the details of Gadai’s job and what he does to make sure the Juicy Jays and Penguin Pilses they happily quaff are, to use another brewing term, good. They usually don’t even see him. He’s in back, checking the sani, pitching yeast into the tanks, and running tests in his lab.

Yes, lab. It’s around the corner from Gadai’s laptop station and easy to miss—a small room that houses an incubator, refrigerator, autoclave, storage space for beakers and petri dishes, and a laminar flow hood that ensures a sterile environment free of microorganisms that could manifest an unsatisfactory beer-drinking experience for the consumer.

At Legion’s original location, in Plaza Midwood, Gadai did most of his work on a Bunsen burner in an old kitchen. Legion owner and CEO Phil Buchy made sure he planned for a lab at the Morehead location. Gadai set it up for a little less than $100,000, and he now can “actually properly perform a real micro”—test for microorganisms, in other words.

The testing enables the only thing most beer drinkers care about: consistent, high-quality beer unsullied by wild yeasts and unwelcome bacteria. But most craft breweries are small operations that can’t afford in-house labs. No one tracks how many breweries have them; I confirmed that, in Charlotte, Legion, The Olde Mecklenburg Brewery, and NoDa Brewing do. But they’re uncommon—as rare, perhaps, as a young man with degrees in chemistry and biology and a specific goal to work in breweries who started his career as a delivery driver and quickly got nearly everything he wanted.

“I love trying to be consistent—you know, making a product that people love as much as I do,” Gadai says. “I love working in breweries.” 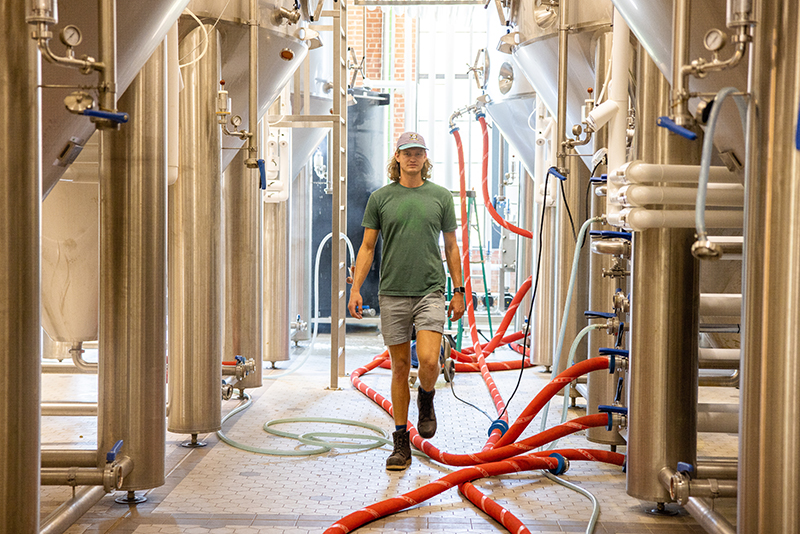 Gadai works with brewers to sanitize the enormous fermentation tanks and keep unwanted bacteria and wild yeast strains out of the beer. Quality-control measures like this, he says, make for a “very, very consistent” product.

He realized he could make a career of it in his fourth year at UNC Chapel Hill. By then, the Connecticut native had ditched his initial plan for medical school, and he was looking for another career path that still involved science. He quietly sat in on a fermentation sciences class, having neglected to sign up for it. Eventually, the professor realized that the 6-foot-3 guy over there wasn’t actually on the class roster. “They’re just like, ‘That’s not how this works,’” Gadai says. “And I’m like, ‘See you later.’”

But that was enough to hook him. After graduation in 2018, he and his younger sister, an N.C. State student, signed a short-term lease on an apartment in Cornelius, close enough to where they grew up in Waxhaw. Gadai gave himself three months to land a job at a brewery. That summer, he visited a bunch before Legion hired him as, he says, “a very overqualified delivery driver. I knew I wanted to get into the business, and I knew I wanted to run a lab. I just had to work to get to that point.”

Within a year or so, he’d begun to put his science background to work in the original, makeshift lab. “There was definitely a road map to move him into a more important role,” says Scott Griffin, Legion’s head brewer since 2018. “He’s just really proven himself … from all his knowledge and the hard work that he does. It takes a special kind of person to be that thorough and specific.” 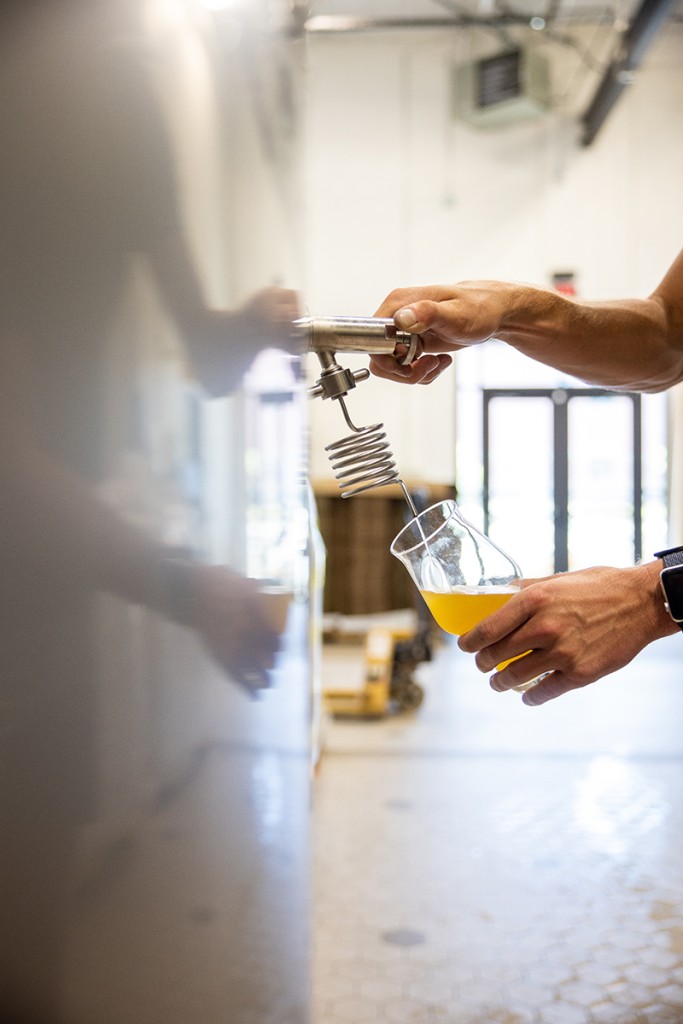 Gadai realized in college that he wanted to work in breweries: “I know I’m not going to be able to survive behind a desk, staring at a computer, for eight, nine hours a day.”

Any brewery owner would love to hire someone solely to ensure quality and install an on-site lab. But small operations struggle to shoulder that kind of expense, especially at first, says Amy Todd, who owns Zymology Labs, a Vermont-based testing business that small breweries can hire when they can’t afford to do the testing themselves. Those that survive and grow can eventually reach that point, which usually depends on annual production. “It seems to be around the 15,000-to-20,000-barrel mark,” Todd says, “when they’re looking to invest in their own labs.” OMB surpassed the 20,000-barrel benchmark in 2020, and Legion aims for 18,000 for this year—although its new Morehead location is big enough, Buchy has said, to eventually support 100,000 barrels.

“For the casual beer drinker, I would say we’re going to have a more consistent beer every single time because there’s less human input, and it’s more recipe-driven,” he says. “Of course, we have to make sure that the recipes are still functioning correctly. But generally speaking, the Juicy Jay you’re going to get is going to be way more consistent now than it was in the past. You get one today, you get one three months from now, you get one next year—that should be very, very consistent.”

Still, a microbiologist seldom thinks he has enough equipment to properly do his job, even if he does his work behind a brewery. Gadai says he could use something else in his lab: a spectrophotometer, which sends light through samples at different wavelengths to measure light absorption, ions, and free amino nitrogen, the last a key nutrient for yeast.

GREG LACOUR is the editor.