In 2019, a team designing a high-rise office in Columbus, Ohio, had an idea and no clue how to execute it. They wanted to build two living “hedges,” each 20 feet tall and 30 feet long, on either side of the escalator bank in the lobby. They contacted Henk and Eric Westerduin, the father-son duo behind Suite Plants in Charlotte.

Suite Plants has installed living plant and moss walls since 2013, using a modular system manufactured in the Netherlands by a company called Mobilane. Customers can buy the panels in a variety of sizes, and Suite Plants puzzles them together to create customizable walls of lush plants. The panels use aluminum gutters and microfiber cloth wicks to water the plants, and the system can connect to the building’s plumbing for automatic watering and minimal maintenance. The panels aren’t just decorative. Indoor plants improve air quality, and studies have shown that they reduce stress, increase concentration, and boost productivity. 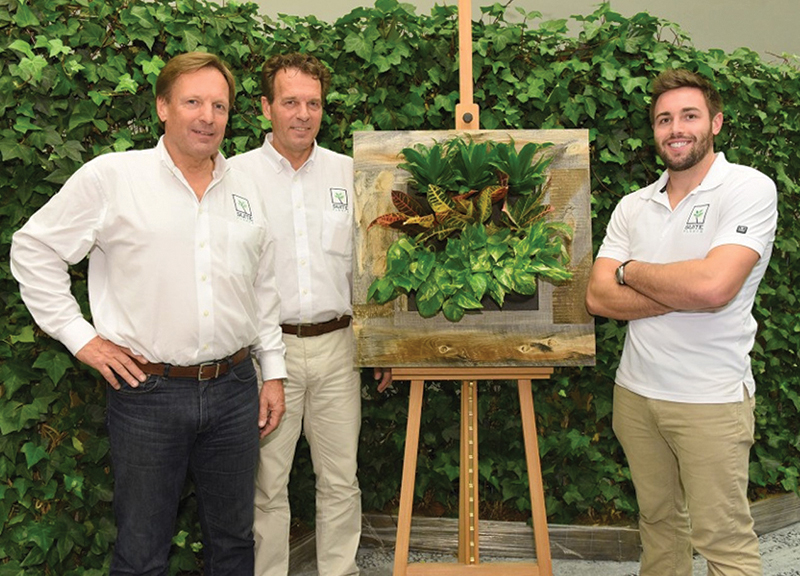 To achieve the 3,000-square-foot “hedges” in the Columbus office building, Suite Plants needed to design not just one green wall but 10—the front, back, top, and sides of each hedgerow. The project took nine months to design and features 11,000 plants.

Suite Plants is a niche business and a return to earth for Henk, a retired military and commercial pilot from the Netherlands. Since he and Eric founded the business in 2013, it has hired eight employees and established an office near the intersection of interstates 77 and 85 north of uptown. They’ve sold more than 500 green wall projects around the globe. Most of their projects are in office buildings or large hotels. But Suite Plants also works with small businesses and residential clients, plus architects, developers, plant-scapers, interior designers, and general contractors. Larger projects can cost several hundred thousand dollars.

Cline Design chose a wave pattern—the most complicated design Suite Plants presented them, Henk says with a laugh—to cover 2,600 square feet on the front of the building. Since Charlotte winters can get too cold for plants, Suite Plants used artificial ones—something the Westerduins often do when the climate doesn’t cooperate. They also sell and rent portable artificial green backdrops for pop-up shops, parties, weddings, and more. 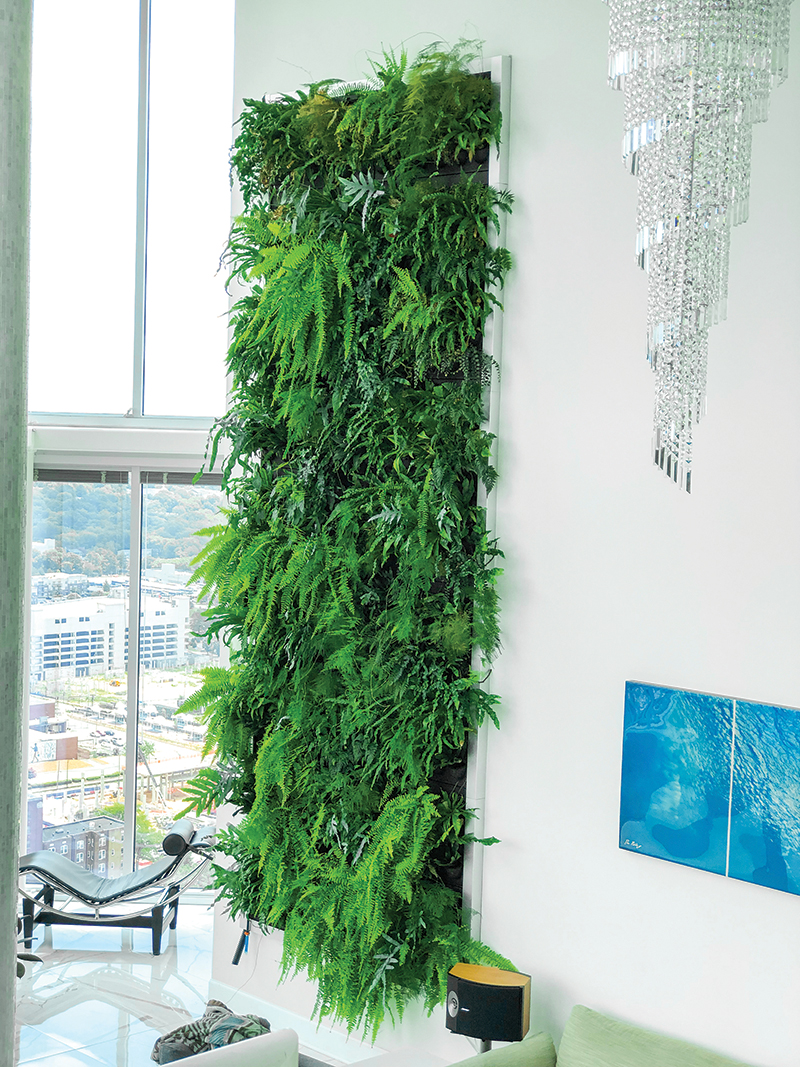 One of Suite Plants’ residential installations, in an uptown penthouse apartment. Courtesy photo.

The idea for Suite Plants came about in 2010 when Henk, then 56, was living in New York and working as a pilot for American Airlines. But he knew that he’d be forced to retire in just a few years; the Federal Aviation Administration requires commercial pilots to retire at 65 because of the increased likelihood of physical and mental decline. Henk had never been anything but a pilot—first in the Royal Netherlands Air Force, then for airlines in the U.S.—but he needed to figure out how to make a living on the ground.

On his many trips home to the Netherlands, Henk noticed living plant walls, a booming industry he hadn’t seen in the U.S. He started small—literally. In 2013, during his last year as a pilot, he began selling LivePictures, Mobilane’s smallest product. They look like aluminum picture frames you’d hang on the wall, but they have foam inserts with small pockets for plants and a hidden water tank system. With a starting price of $299, they’re no ordinary houseplants from Home Depot. But they’re popular with folks who only want to water their plants every four to six weeks. 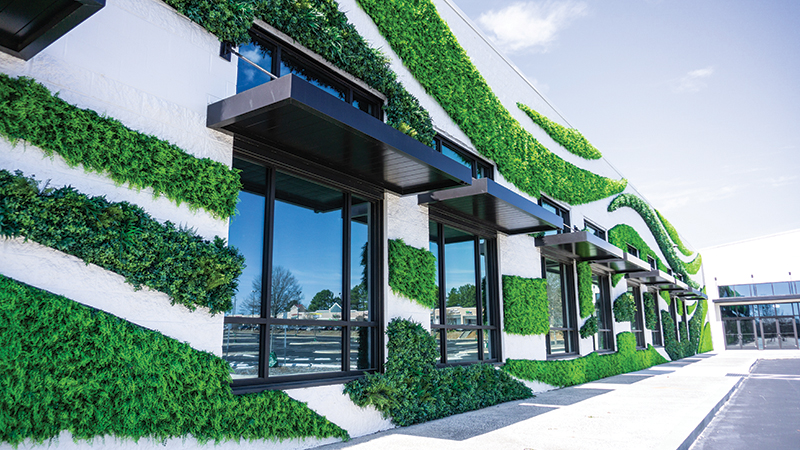 The artificial plant wall at Arrowood South, an office building in Charlotte’s Montclaire South neighborhood (above). A living wall in the kitchen of Launch Factory, a startup studio and coworking space on Charlotte’s west side (below). Courtesy photos. 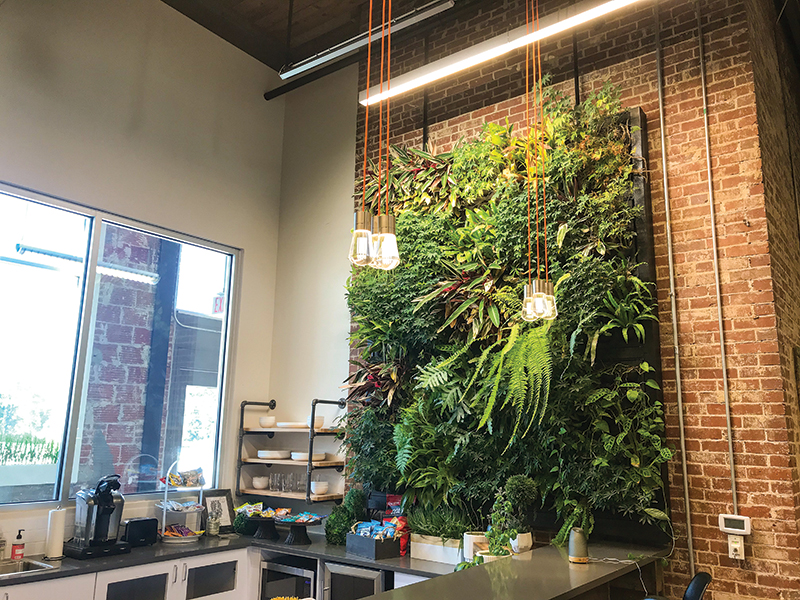 Suite Plants quickly gained traction in the U.S. Eric came on board that same year, leaving behind a career in investment banking where he worked for companies like Bear Stearns, J.P. Morgan, and Rabobank. Father and son ran distribution out of warehouses in upstate New York, then Indianapolis, before they moved to Charlotte in 2018. Kansas City, Missouri, and several West Coast cities made their short list, but Charlotte won out, Henk says, because Eric liked the number of young people, the booming brewery scene, and its position on the East Coast, where most of his family lives.

COVID slowed business for a couple of years; companies don’t want to spend money on office buildings they don’t use. But some office workers are returning, and Henk says business is growing again. Current projects include a 360-square-foot artificial green wall on the rooftop patio of an uptown apartment building, a 250-square-foot project at a high school in Colorado, and a slew of other homes and businesses that need a boost of green.