Meg McElwain’s son Mitchell was diagnosed with a rare form of leukemia in 2012, when he was 3 months old, and he died just after his second birthday in early 2014. Within a few months of his diagnosis, McElwain, a longtime marketing professional, started Mitchell’s Fund to help other families of critically ill children.

At first, Mitchell’s Fund operated under the Novant Health Foundation and concentrated on helping families with day-to-day expenses. But in 2019, McElwain established it as a separate nonprofit, and its mission gradually evolved to fund counseling for children with terminal or life-threatening illnesses and their families. Through her grief, and long before Mitchell’s death, McElwain did something else remarkable: She shared her and her family’s experience through social media and conversation to “pull back the curtain” on the reality of pediatric terminal illness. She hoped her openness would let people who have suffered similar losses know that others in the community shared and understood their pain.

On Feb. 27, which would have been Mitchell’s 10th birthday, McElwain and Mitchell’s Fund board members plan to officially open a counseling center for the children the organization serves. Called Mitchell’s House, it will provide therapeutic and mental health support for siblings of terminally ill children. Medical crises inflict damage on family members, too; 20% to 30% of parents and 15% to 25% of children and siblings endure persistent traumatic stress reactions that impair their ability to function, according to the National Child Traumatic Stress Network.

McElwain, 47, continues to speak about her own mental health struggles. Her words are edited for space and clarity.

I was 16 years old when I first began to have feelings of anxiety and depression. I grew up in a small town in Mississippi where there were no therapists or mental health services, and the need for such was considered taboo. When my mother had to take me to a different town to find support, it was a shameful secret whispered about within my own family.

Despite my quiet, personal struggles, I was very popular and enjoyed a big social life at Ole Miss. I saw a doctor who diagnosed me with ADHD and was having me try different medications. That, combined with college drinking and partying, made for a messy combination, and I ended up having to be hospitalized for 10 days during my junior year. I found some solace there, hearing other people talk openly about their feelings, and realized my “problems” weren’t so bad.

After graduating, I moved to Charlotte, where I knew no one, to start my first real job. I had a plan for my life, and for many years, those plans unfolded just as I had intended. I got married, started my own marketing firm, and when I was ready to have children, I got pregnant right away with my first son, Frank.

In 2012, I gave birth to another healthy, vivacious boy, Mitchell. On the afternoon of his baptism, when he was 3 months old, I noticed bruising on his legs. The next day, I took him to the pediatrician, where a blood test showed that he was anemic with an extremely high white blood cell count. We were sent to Novant’s Hemby Children’s Hospital, where he was diagnosed with infant acute lymphocytic leukemia and given a 40% chance of survival. We began treatment right away.

Child cancer treatment is intense and traumatizing. Everything in my life fell by the wayside: my other son, my marriage, my business. Mitchell wanted his mama and looked to me for comfort. I had to stay calm and upbeat, but I was in a war zone. Mitchell had to be on so many medications just to function, and he cried constantly. Because of all the chemotherapy, I had to wear masks and gloves just to change his diaper, and I had to do so immediately or his bodily fluids would burn his skin.

I shaved my head about a year into Mitchell’s treatment. At the time, I insisted it wasn’t a breakdown, but it was. I was so tired of people telling me that I was so strong. I watched a baby girl on life support dying right in front of me, and it profoundly shocked me. I wanted to shock people the way I was shocked. People needed to see what I was seeing and understand the depth of devastation. 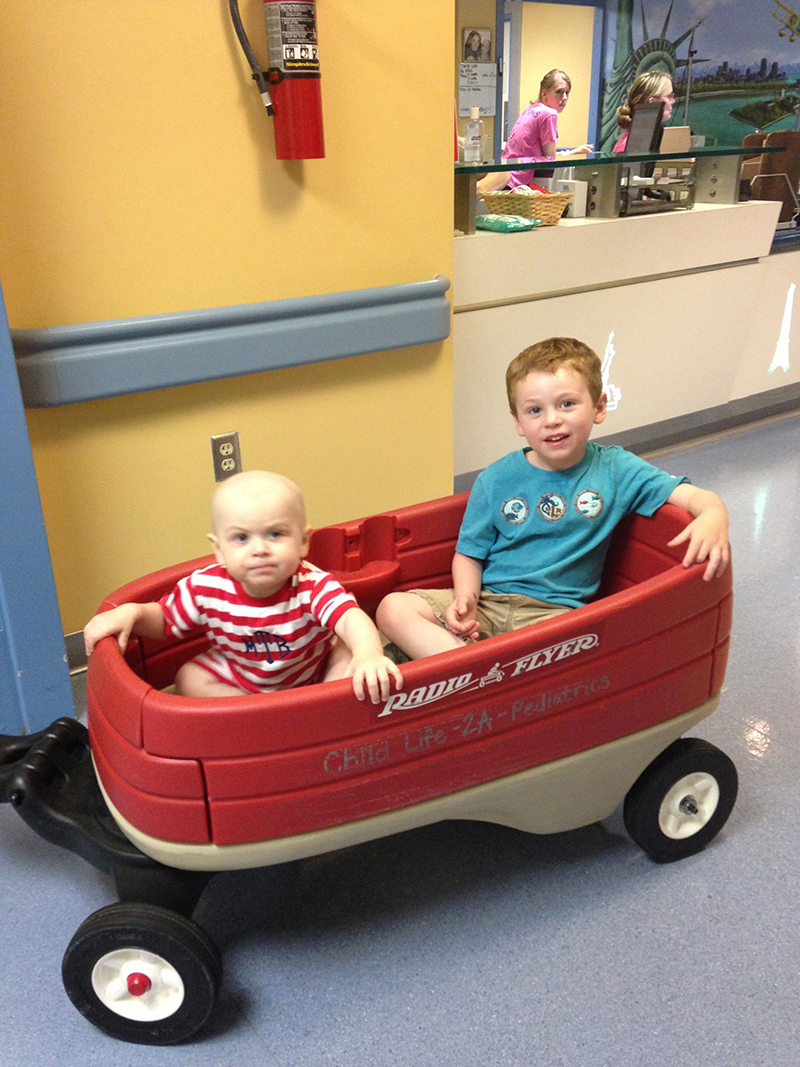 (Above) Mitchell at a year old in 2013 with his older brother Frank, then 4. (Below) McElwain and Frank in December at Myers Park United Methodist Church. “My son Frank,” she says, “has endured so much.” Courtesy Meg McElwain; photo by Rick Hovis. 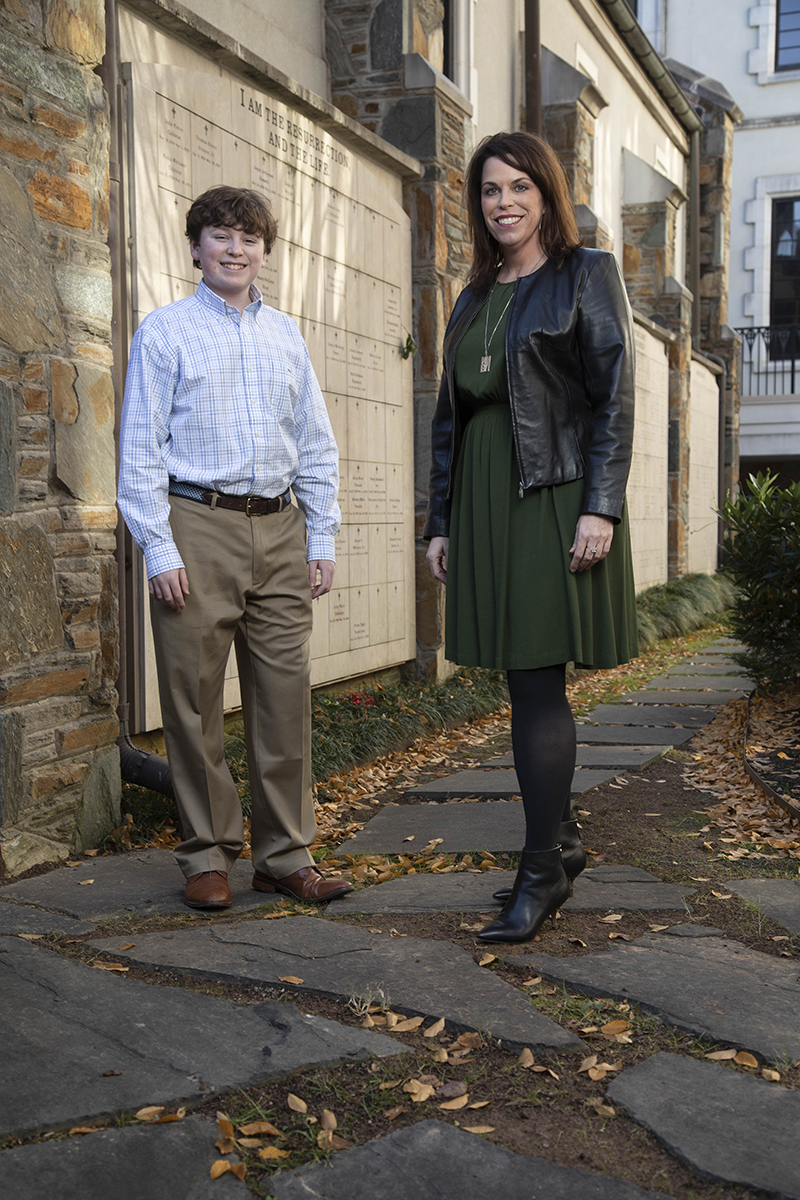 We started Mitchell’s Fund while Mitchell was still living, simply as a vessel to take in all the generosity being bestowed upon us by our church family and community of friends and neighbors. Bearing witness to the trauma of other families with sick children in the hospital, I knew early on that Mitchell’s Fund would do something in the mental health space eventually. But when we started, we helped in the most immediate and obvious way we could, which was to provide financial assistance to families who were in the hospital caring for a child with a terminal illness. When you have a sick child, the day-to-day bills do not stop. How is a parent supposed to choose between going to work or holding their child’s hand at their hospital bedside?

After 184 days in the hospital, 75 blood transfusions, and 417 chemotherapy treatments, I went from praying to God to heal my child to begging God to take him. There was relief in the ending of my child’s suffering. But the constant stress and adrenaline I had been living in gave way to total darkness.

For the next four years, my mission was truly just to survive. I would get up, get Frank off to school, then crawl back into bed and hide under the covers and let the hours tick by. Right after the first anniversary of Mitchell’s death, I had to be hospitalized. I was in so much pain. All I kept thinking was that if I went up to the attic and hung myself, that the minute my neck snapped, the pain would be gone. But I was committed to survival, if for no other reason at that time than to care for my living child. I called my grief counselor and asked her to call one of my friends to come get me.

I was told early on that when you have a sick child, you’ll see the best and the worst in people. There were people close to me who completely disappointed me, and then there were casual acquaintances who floored me with their kindness. When a child is sick, for other people, it is like watching a movie. And when that child dies, it’s like the movie is over, and people go home. It’s not fully real for them. And that’s normal. People don’t know what to say. You want to know what to say? Just say, “I love you.” Even if you’re not that close, even if it feels awkward.

My son Frank has endured so much. He had to take a back seat to Mitchell’s treatment, then he lost his brother, then he had a mother drowning in grief for several years. His elementary school years were extremely tough. Thankfully, he had wonderful teachers and school counselors who were equipped to support him, but the other kids and their families weren’t as understanding.

Grief in children comes out in outbursts. Frank struggled with his emotions and with learning how to express himself for a while. Kids made fun of him. One day on the bus, one of his peers accused him of making his brother up entirely just for attention. Our family was already pretty isolated in our grief, but I fought as hard for Frank as I had for Mitchell. I stood up and (fought) for that child with other parents, and that isolated us more. The other kids had no understanding for what Frank was going through, and their parents were unwilling to believe in their own children’s cruelty.

Frank has really inspired the work and focus of Mitchell’s Fund and our new counseling center, Mitchell’s House, moving forward. The needs of a sick child overwhelm a parent’s capacity to care for siblings, and siblings often have no mental health support during the most traumatic time in their lives. Utilizing art, play, and talk therapy, Mitchell’s House will be a space for siblings to grieve, express emotions without judgment, and process difficult diagnoses. The therapists there are focused on reducing their trauma and helping them learn stress management, emotional regulation, and balancing the reality of fear with the necessity of hope.

Some people are a little scared by my ability to set boundaries in my life today. I spent so many years in darkness, I am totally committed to living in light for me and my child. Resilience is not a place. You don’t achieve it. It’s something you constantly work towards. Or as they say where I’m from, just try to keep it on the road and not run in the ditch.