Dr. Chuck Edwards treated thousands of Charlotteans during his 30-year career as one of Charlotte’s preeminent cardiac surgeons. But when he developed a hand tremor in his early 60s, he faced a profound question: If he couldn’t perform surgery, who would he be?

Both of Edwards’ parents had died years earlier from Alzheimer’s disease, and his reflections on their deaths provided the answer to his question. At 64, the Charlotte native found himself back in medical training, this time at Johns Hopkins University, for a new career in dementia treatment.

In December 2013, less than a year after he’d set down his scalpel, Edwards founded Memory & Movement Charlotte, a nonprofit practice that treats Alzheimer’s, Parkinson’s, and other forms of dementia. It now has 19 staff, including three physicians, and sees 40 new patients a month. His new patients require a wholly different kind of treatment; no procedure can fix dementia. Edwards says he’s learned to ease their journeys and arm their families with knowledge, care, and compassion.

A year ago, Edwards, 74, self-published a book titled Much Abides: A Survival Guide for Aging Lives. It’s a kind of guidebook for aging but also details his own life as a physician, a son, and someone who’s aging himself. (It’s available locally at Memory & Movement Charlotte and Park Road Books and on Amazon; 50% of proceeds from sales go to the organization.)

We spoke with Edwards in his medical office in July while he was on a lunch break. His comments are edited for space and clarity.

I always loved being in the operating room. I was always extremely comfortable there, and what I really liked was going in and doing an operation and coming out and having the patient wake up and be perfectly normal. Complications were devastating. I was given a gift by coming back to my hometown, to Charlotte, and being able to operate on people that I have known all my life—some of my teachers at school, my coaches, fellow students. That was a gift.

You’ll see the tremor if I hold something in my hand. You’ll see that I start to shake. So I knew I wasn’t going to be able to operate in my 70s. I had a little bit of a tremor for almost two years. I never mentioned this. My wife, Mary, knew it, and one other close friend of mine knew about it, but it wasn’t something that I told anybody about. I had always been good with my eyes and my hands, and I just didn’t want to be an old guy in the operating room shaking. So that’s where the whole process started.

Not doing operations wasn’t the scary part. It was not having that access to people to figure out what’s wrong with them and to try to at least help fix them. So that was the part that triggered the doom. I said, “What am I going to do?” I played it over in my brain: Could I have an extended career and not do surgery? I didn’t think that was going to work. I think I had buried in my brain a lot of the trauma and pain that came from losing my parents. You’re used to fixing things, and then you’re confronted with two people that you love as much as I loved my parents, and you couldn’t do anything. They thought that I could fix anything. And then, when they got this (Alzheimer’s), I had nothing. Nothing was going to fix it.

The people who cared for them, it wasn’t that they didn’t want to help, but a regular primary care physician doesn’t really have the time to delve into this like we do here, and also they don’t have the experience with the medications, the complications, the behavioral issues. My mother was psychotic, and she was never put on medication to control the psychosis. My father died at 75. My mother died at 76.

It just kind of came to me one night. I went to talk to Mary, my wife. I have this sentence that I tell young kids when we do mission work: All compassion begins with competence. You can’t help someone unless you have a skill. You just can’t say, “Oh, I really care about these people,” because all you’re going to do is get in the way. Mary used that line on me. She said, “You don’t have any skill. This is a bad idea.” She is very direct.

I went on the computer, and I searched: “Centers of excellence, east coast, Alzheimer’s,” and three places came up: Columbia, Duke, and Hopkins. I wrote a letter to the heads of the departments at all three that handled Alzheimer’s treatment. At Duke, it was geriatrics. At Columbia, it was neurology. At Hopkins, it was psychiatry. The first line of that letter was, “When a 64-year-old cardiac surgeon applies for a dementia fellowship, doesn’t it prompt the question, ‘Shouldn’t he be in the clinic rather than starting it?’” I don’t know whether that’s what triggered their response to me, but all three asked me to come, and all three accepted me.

The day I arrived at Hopkins, I didn’t have any idea what this was going to look like, or whether this was going to work. I had just come back from Rwanda, where I had done a bunch of surgery and I had been in charge, and all of a sudden I was nothing. I go and get my badge and I thought it might say “visiting fellow,” something sort of dignified, and it said “psychiatric observer.”

I stayed for the better part of four months. I worked really hard. I spent every day in the clinic and nights studying. When I left, I had a working knowledge of Alzheimer’s and related dementias, and I spent a lot of time in the Parkinson’s clinic there, too. I had a good foundation. But what I didn’t understand was that this is all about the caregivers. I can’t help any patient unless I help the caregiver. And so the day that we opened up, in December of 2013, I thought I knew what this was going to look like, and I didn’t really have any idea.

This is a nonprofit, and that allows me to see fewer patients. If I was working for a health care system, they would want me to see 15 or 20 patients a day to be profitable. We see an equivalent of six patients a day. A new patient has 90 minutes, and a return visit has an hour. Pre-COVID, we would get four or five calls a day where people’s lives are kind of coming apart. They just need someone to help them. During COVID, sometimes we’d get 15 of those calls. These days are emotional. They’re long days. They’re hard days. This is not for everybody.

We saw one demographic that has been almost destroyed by COVID. It’s people who were independent with mild memory loss, who were highly functioning. They have plummeted. We have realized that we are so dependent on what seemingly are nonessential interactions with people. The guy that is at the laundry or the cleaners or at Blackhawk Hardware, or knowing the people who do your hair—all that was taken away, and we realized that’s the fabric of our life. It’s what keeps us healthy. Just being stuck at home, they just decline so much. 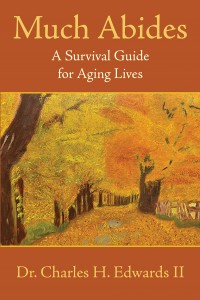 Alzheimer’s disease is unique. When you do heart surgery on someone, the family comes together, you have the big day, and then you have some rehab, and then the patient most of the time gets well, and everybody goes back to what they were doing. When you make the diagnosis of Alzheimer’s disease, every person’s life in that family is changed forever. Ninety-two percent of our patients die either at home or they die out of the hospital, because we don’t want them to be in the hospital at the end. We want them all to have hospice, and we want control of the situation.

The book came from three themes. One was the stories. The second was my colleagues and my friends. Surgeons have difficulty with retirement, and all physicians have a hard time, because you’ve got so much invested in it, and for most physicians, it is all-consuming. The third thing that crystallized it was watching my patients and their families, where their retirement and their lives and the joy in their lives had been truncated. It had been jettisoned and taken away. Those came together, and it wasn’t like, Oh, I really want to write this book. It’s like it was forced on me. I had to get it down.

I want people to value the thoughts that they have. Human beings are marvelous, and they see things, and what happens is that life has a tendency to take away our confidence and take away our will. Will is that magic between thought and action. I want people to value who they are. I also want them to understand that life beats everybody up a little bit. You have to be able to navigate that. Sometimes we’re at our best, and sometimes we’re not. We have to forgive ourselves. We have to forgive those who have gone before us. And so I would like people to step back and think about what they want their lives to look like—and, when they’ve made that decision, to have the will to make it happen.