Chef Ron Ahlert began to volunteer as an instructor for the Community Culinary School of Charlotte not long after the nonprofit’s founding in 1997 and just a few years after he and his wife, attorney Molly McGill, had moved down from New York City. Ahlert had worked in some of Manhattan’s well-known restaurants, including Mortimer’s and Joe Allen, and gotten healthy after years of eating poorly and drinking too much. Ahlert thought his experience fit the school’s mission.

The school provides culinary training, substance abuse support, and job placement help to people transitioning out of incarceration, addiction, and homelessness. Almost 1,100 students have graduated from the tuition-free, 14-week program, funded through donations, grants, a catering business, and its café.

In 1998, Ahlert left a job as a chef and manager for the multinational food service company Compass Group to join the school as an instructor, making $7 an hour. He felt drawn to the work, and his wife’s legal career meant they could afford it. That was more than 70 classes ago. Ahlert took over as executive director in 2006. At 61, he oversees a full-time staff of eight and an ongoing schedule of 20-student classes at the campus on Monroe Road in southeast Charlotte.

“I believe,” Ahlert says, “that everyone deserves the opportunity to right their lives—a second helping of life.” Here he is in his own words, edited for space and clarity.

I grew up in Westchester County, New York, the youngest of six siblings. My father was a lyricist who wrote songs for Perry Como and Aretha Franklin, and my grandfather was a well-known composer and songwriter who was a past president of ASCAP (American Society of Composers, Authors and Publishers). Sunday mornings, my dad would sit home, and my Irish mom would drag us all to church.

At 17, I moved into New York City. My apartment was so small, there was a shower right next to the stove. In my early 20s, I went to Paris to play in a recreational basketball league that funneled players to a pro team. I had a sister already living in France at the time. Every day, I would have my coffee and read the paper. One morning, I read an announcement in the International Herald Tribune that my family was looking for us. They needed to get in touch because my dad had died. I took a flight home immediately.

I worked in nightclubs as a bartender. But when they needed help, I would be the bouncer.

When I worked at Mortimer’s, there was an old-school chef there who led by intimidation, not nurturing—and I stood up to him. They were getting ready to close for two weeks during the summer, and I was told that I wasn’t being invited back. That turned out to be one of the best things that could ever happen.

I had a problem with alcohol (and mayo) that kept me from being the best husband and father. When my son was 2, my wife said something had to change—and she was right. She didn’t want to be married to a boy; she wanted a man. So I went into a journey of recovery. Next year, our son will graduate from medical school, so I guess we did something right.

The recovery process allowed me to understand that when someone has these issues, I can be a guiding force, but I can’t be their counselor. We have a licensed clinical addiction specialist on staff. We were one of the first programs of this kind to include a drug and alcohol counselor. I’m very proud that we’ve done this for over 12 years. 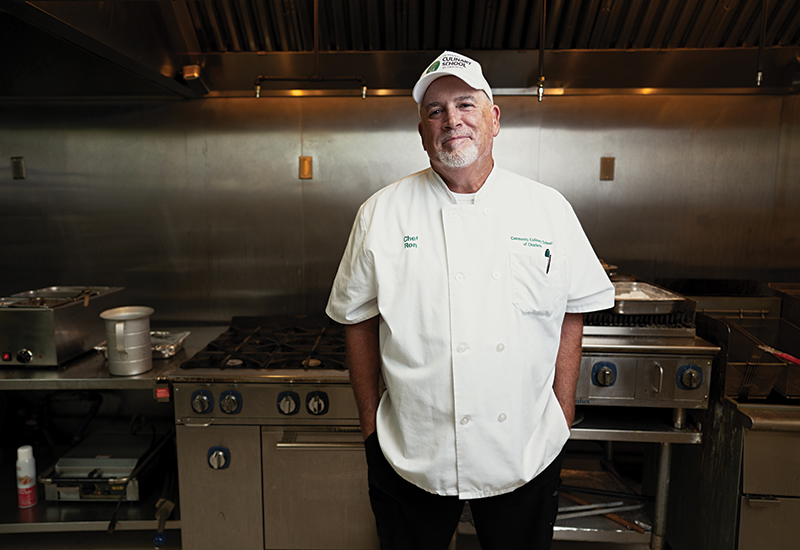 Years ago, I would sit in drug and traffic court in my chef’s uniform and wait for them to bring the people in. When someone would be there for $10 worth of pot, I’d ask the judge to send them to the school instead of jail.

Our graduates have gone on to work in fine dining, food and beverage, hospitality, food prep, catering, and more. They’ve worked in restaurants, hotels, and hospitals. They’ve worked in fast food. If there’s an opportunity and you can learn and grow, that’s what’s important. We’re all about people earning a fair day’s pay.

I’ve heard all kinds of horrible stories. Things like, “I’ve been raped by my father,” or “My husband is beating on me.” The first thing I ask is if they want me to call the police. Then I try to connect them with the right people who can help them.

We’ve helped people get new teeth, new glasses, medical help, safety from domestic abuse. We’ve had students who weren’t taking their meds for mental health issues, and we work to help them get that under control. We’ve provided clothes, shoes, and toiletries when people have needed it. We also give students bus passes and gas allowances, so they can reliably get here.

We have weekly group sessions where we talk about different topics—we focus on things that will make us better. There are certain basic standards here that don’t require any skills. Things like be polite, no drama—expectations we have.

I love it when alumni come back and hire students, or when they start a business, which is happening more. I see that as a full circle.

We put our time, talent, and treasure into this program. When you do that, you want a return on investment. In this case, that is our students achieving success for themselves, whatever that means for them. It’s frustrating when they sabotage that success, but they’re really letting themselves down more than anything.

I’ve had my car vandalized. Verbal threats. Had people punch me. At our yearly fundraiser last year, there was an incident. I’m in my red chef’s coat, with our supporters there. I told one of our students to stop doing something. He reacted badly and started cursing and saying inappropriate things to the donors. We go outside, and he takes off his jacket and shirt. And I said, “Are we going to do this right now?” I can have a certain voice when I need to. He backed off and started to leave, but turned around and started walking back, cursing. I said, “This ends right now!” And that was it. He left.

I’m direct—and can be crispy around the edges sometimes.

One of our students came to us after 38 years in prison. He owned a catering company and was robbed at gunpoint along with his daughter. They put a gun to her head. Two weeks later, he found out it was his business partner. After that, (he and his partner) went out for a drive, and only one of them came back. He served his time and came to us only four days after he got out—and he was a great student. We were around the same age and became friendly. I met his family. He showed me how to put peanuts in Coca-Cola. Unfortunately, we lost him to COVID.

One time, a student went after one of our alumni. I jumped in the middle and was holding them apart. It was like a UFC match. People were running out. The cops showed up. The student ran out, but the cops caught up with him and brought him back. They weren’t gentle with him. They wanted to put him away, and asked, “Chef Ron, what do you want to do?” I looked in his eyes and saw his troubled past. He was living in a shelter and had nothing, probably not even a dollar. I thought, This guy’s had shit handed to him his whole life, and I’m not handing him another piece. So I told them I didn’t want to press charges.

He said, “Chef Ron, you’re something else. I won’t forget you.” I told him to please forget me and forget this place. Once someone gets violent, they can no longer be affiliated with the program.

One minute of anger is 60 seconds of wasted happiness. I don’t know who first said this, but it’s true.