Charlie Petrizzo was 16 in the summer of 1979, painting houses for a summer job in Staten Island, New York, where he grew up. The last thing he remembers is a Supertramp song that blared from a transistor radio as he repositioned an aluminum ladder. Then he felt what he describes as the sensation of his eyeballs being sucked out of his face. He had bumped a power line with the ladder. The accident left him with third-degree burns, permanent scarring, and chronic pain—and was his second near-death experience. When he was 5, he was hit by a car and suffered massive brain trauma. Petrizzo eventually made a full recovery. Then came the power line accident.

Petrizzo ultimately recovered from his burns, thanks in part to emotional support from the family’s Labrador retriever mix, Toby. He began a successful career as a bank executive and moved to Charlotte from New Jersey in late 2000 for a position at Wachovia. But years later, he fell into a deep depression. He began to question his purpose and whether he’d made a mistake by moving. Petrizzo left his banking job and, with his wife, Sandy, founded Project2Heal, a nonprofit that breeds, nurtures, and socializes Labs to donate to service dog organizations.

Based in Waxhaw, where the Petrizzos live, Project2Heal reduces the time and cost for a person in need to get a service dog. It’s hard to keep up with demand; Petrizzo, 58, says he asks his partner organizations how many puppies they think they’ll need, and the answer usually comes back: As many as you can give us. “I believe the real reason God sent us down here,” he says, “was to start Project2Heal.” What follows is Petrizzo in his own words, lightly edited for length and clarity.

I would not wish a burn on my worst enemy. When I was burned 40 years ago, they would do the debriding of the dead or burnt skin while the patient was awake. I had this done every day for the first four or five weeks. Prior to a debridement session, they would give me an injection of morphine. It doesn’t make a difference when you’re having strips of dead skin pulled off your body with tweezers.

My emotional savior was a Lab mix, Toby. He was my companion, and he was right there with me when I was stuck at home and couldn’t go anywhere.

I got a structured settlement annuity. Starting eight years after the accident, I’ve gotten a check every month—for the past 30 years. The payments go up over time. It’s for the rest of my life. That settlement is what made me start looking at mutual funds and learning about money, and I wound up loving economics.

I felt like an ogre, with scars all over me. I wore a hat in college to cover the scars on my head. I would always get there early each semester to meet the professor. The priest (at a Catholic university) told me to take my hat off, and I told him I couldn’t. He told me I had to take it off or leave. So I left. I was so upset, I was crying from embarrassment. Some of my frat brothers came up to him after class and explained about my situation. The next time I saw the priest, he apologized to me.

As I learned about annuities, there was an advertisement for customer service positions at Prudential mutual funds. I interviewed and got the job. I quickly went from running the operation for a third-party broker dealer to being brought down to Charlotte to build an annuity program at First Union Bank. I would fly back home every weekend. After a few years, I was asked if I wanted to take a position as director of sales, marketing, and product development, which required me to be at the home office in Charlotte. (Ed.: Wachovia and First Union merged in 2001.)

I left Wachovia in 2003. I was the national sales manager for the Annuity Group. We had the largest bank annuity program in the country. I was making deep into the high six figures.

I remember being in executive meetings and trying to find the edge of a door to rub my muscles against because my back and neck pain was so bad. My chronic pain was part of the reason I left the corporate world, but I was also going through a bad depression. My father-in-law had died, and my mother was very sick. It was a horrible time. To try to help me with the depression, my wife got me a Lab.

I was trained by Sally Bell, who is arguably the world’s best breeder of Labs. She was my mentor. Breeding is an art and a science. What will define a dog as an adult is about one-third who the mother and father are—the genetics—and two-thirds what the puppy experiences during its most important phase of life, which is birth to 12 to 16 weeks. The art is knowing which dogs to put together.

It cost hundreds of thousands of dollars to build this 3 acres. But Sandy and I work as volunteers. We don’t take a salary for anything.

The dogs we use for breeding live in “chaperone” homes. All we ask is that they bring them in for breeding three times. After that, the dog is theirs to keep—and they get an incredible pet. We donate 50 to 60 dogs per year and have about 26 partner organizations we work with. 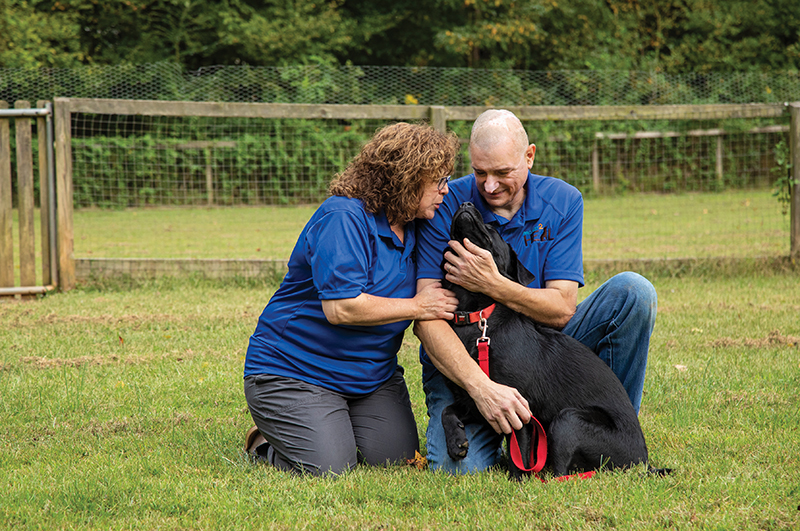 Charlie Petrizzo with his wife, Sandy, and one of their Labs.

Our dogs have gone to children with autism, juvenile diabetes, spina bifida, and cerebral palsy. We also partner with dog service organizations that serve veterans with PTSD and mobility issues. Our success rate with veterans with PTSD is 70%-75%. The industry rate is about 50%. I want to help reduce veteran suicides.

We have a school outreach program. Aside from being able to pet the dogs and learning about soft touches, the students can read to them. And we incorporate the dogs into lessons about history, geography, and science. We’ve also worked with local corporations to bring the dogs for stress-down days, where the employees can interact with our puppies. Another place we bring them is to nursing homes for the residents to enjoy. The nursing home programs are free.

The letters we get are unbelievable. There are so many stories. There were twins with disabilities who had no friends. They got one of our puppies, and the dad would go in the backyard and kick a ball around with the dog. Some kids in the neighborhood saw the dog and wanted to play with it. Now the kids have friends.

I’ve met some of our recipients. One guy was a Marine. He had big muscles and a USMC tattoo. He put his hand on my shoulder and said, “Sir, I was a trigger pull away from taking my life. Thank you. I know he (one of our Labs) is going to take great care of me, and I promise you that I’ll take great care of him.”

At times, I’ve wondered if we were really making a difference. When he said that, I turned to Sandy and said, “We don’t need to wonder if we’re making a difference anymore.” I don’t worry about how I look anymore, because I have a purpose.