One day in 2016, JoAnn Britt sat at her dining table with coffee and the newspaper, her morning ritual. When she tried to turn a page, her left hand wouldn’t move. “All of a sudden, I heard a noise,” Britt says, “and it was the paper shaking.”

After several similar episodes, Britt was diagnosed with Parkinson’s disease, a central nervous system disorder that affects movement and speech. She was referred to Memory & Movement Charlotte—a nonprofit medical practice in southeast Charlotte for people with Parkinson’s, Alzheimer’s, and other memory and movement disorders—where she was seen by Dr. Sanjay Iyer, a movement disorders neurologist. One of the first things Iyer told Britt was to continue her hobby of more than two decades: painting. It would serve as therapy for her mind and body.

When Britt began to paint, in her 50s, she had just graduated from Queens University with a bachelor’s degree in psychology; she worked in the dean’s office and later took a job as an office manager for a private psychology practice. She loved her work but realized she needed a creative outlet. She used a small room in her home as a studio and began to tinker with mediums and styles. Britt eventually focused on abstract acrylic paintings, which she loved because they could be interpreted in different ways.

In her 70s, Britt moved to a new home that lacked studio space, so she rented a studio in south Charlotte, which she still uses today. But over the past year, Britt’s life has gotten tougher. At 76, her Parkinson’s has worsened; she’s begun to suffer from impaired balance and hallucinations. In early 2021, she was diagnosed with stage 1 lung cancer. She suffered a collapsed lung during a hospital stay for a biopsy. Then, in May, her life partner died. “I’m so involved with my Parkinson’s that I forget I have cancer, too,” she says. “And then (my partner’s) death—that was something that certainly set me back.”

For the first time since she began to paint, Britt has taken a break. Like most artists, she has doubted herself over the years. But she says she won’t let Parkinson’s stop her from painting or living. “I realize that I could just give (art) up,” Britt says, “but that’s not going to happen.”

Here is JoAnn Britt in her own words. Parkinson’s disease hinders her memory and speech—she struggled at times to recall specific words and dates—so the interview was conducted in person and via email. Responses have been edited for length and clarity.

I grew up in rural South Carolina. I was born in 1945. And there weren’t many art teachers in Dillon, South Carolina, in that time period. But I had a creative streak through music and also sort of a crude interest in art. I would always buy the big boxes of Crayolas and that kind of thing. And I loved it.

I also sang. I had a voice. I started singing when I was about 5 years old. I would make up songs and sing and had a great time with music. And throughout my life, music was a thing. I majored in voice at Winthrop. But I was never in a place where art was taught, and I didn’t get to zero in on that.

After I graduated from Queens, a group of good friends and I started an investment club that has lasted like 18 to 20 years. There are five of us, and we call ourselves “group therapy” because that’s what it is. Back then, we began doing our own little (art) gallery crawl. We’d pick a Friday, have lunch, and go to as many galleries as we could. We did that for a long time. … Then one of my friends decided that she wanted to see my work, so she said, “Let’s bring it to my house, and we’ll have some people over.” That was my first official sort of artist display. That was probably 10 to 15 years ago. And I never quite knew if I was ready. I couldn’t quite accept that I could possibly show it or have somebody look at it. 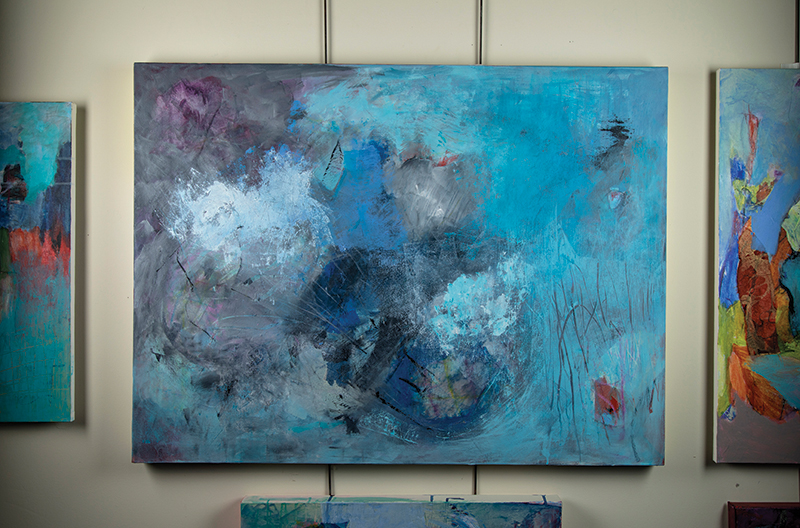 “Untitled Blue Abstract.” “I love abstract because you get to interpret your own feelings about it,” JoAnn Britt says, “and think about how it’s going to affect the viewer.”

I’m a little hesitant to really call myself an artist. It’s sort of a joke among artists—whenever you’re ready to say, “Well, now I’m an artist.” I haven’t had the formal training. You ought to have your credentials, and I don’t. If I sold more paintings, that might be one thing. But my granddaughter says, “Oh no, JoJo, you are an artist.” And I think every time I would go into an art gallery, I would learn something. You can take away whatever you want, but you do learn.

And I’ve taken a lot of classes, even though I don’t have a degree. I took classes at Central Piedmont. And I took them elsewhere, with Robert Burridge and Andy Braitman. In recent years, I’ve taken online courses, like from Louise Fletcher and Nancy Hillis. … And I learn from doing; there’s nothing like the paintbrush and the canvas.

My favorite galleries in Charlotte are Hidell Brooks and Jerald Melberg. I’ve attended their show openings for years.

When I can sit down and paint, and something actually comes out on the paper, it’s really special. Especially with abstract art, you don’t know what’s going to happen on that paper. And when it does, when the other shoe drops, it’s just like, “I can’t believe it.” It’s so good. It’s so cool.

I love abstract, because I can interpret it any way that I want to, whether as a viewer or as an artist. At times, I can really get in the zone. And that’s a great place to be. You think, How much time has passed?

One thing that I find frustrating as a painter is that sometimes I look at a painting, and I think, I can do that. Anybody can do that. But there are times now where I don’t know that I can do it. And I get so frustrated. That’s sort of where I am now. I’m trying to get back into it. And I know there will be limitations, like the size of the canvas or being able to move things around. Painting is more physical than I thought. People will argue about whether painting is physical, and I think it is—definitely. But I don’t always know that I have the strength or stamina to continue. But I want so much to.

Joseph Campbell said something like, “We must be willing to let go of the life we planned, so as to have the life that is waiting for us.” That’s important when you have Parkinson’s.

I love painting. I want to continue. I just don’t want anything to interfere. And I’ve had about six months of not painting. And I want to get back to it. … I plan to start painting again as soon as I’m able to. I’ve been doing a lot of therapy: vocation, speech. I’ve been busy and still recuperating.

Parkinson’s has effects on speech and handwriting, and I can definitely tell that both of those have declined for me somewhat recently. I just have to keep trying. I can see that it’s going to physically impact what I can do, but hopefully I’ll be able to compensate and make it work.