Home/Uncategorized/Hazard Pay: Meet the Couple Behind Bio-One Charlotte and Charlotte Hoarding
Previous Next


“We would consider this a level five,” says Jen Symons, “on a scale of one to five.” We’re in a south Charlotte bungalow in early November, and every room practically bursts with random items, many of them stuffed animals: a llama here, a panda and a lion there. The closets and shelves overflow with unopened boxes, clothes, and piles of things I can’t identify. Full plastic containers rise to the ceiling. In one room, I steady myself with my hand on the wall to squeeze between the piles. A glimpse of a bedpost provides the only real clue that we’re in a bedroom.

Donald and Dora used to live here. (Not their real names; the family requested that we not identify them for this story.) Donald, 80, now lives next door, in a house they bought as his wife began to hoard after an estrangement from one of their adult daughters in 2010. After their disabled son, who lived with them, died in 2019 at age 51, her behavior worsened. “I’d ask her, ‘Who’s going to clean all this when you’re gone?’” says another of their daughters, Angel, who’s here today to help oversee the cleanup. “She’d get defensive.”

Dora died at 69 in 2020, and Donald asked a friend from his church, Quail Hollow Presbyterian, to help clean out the house. She took one look and said, “We need help.” The friend told church leadership, which contributed $3,000 toward the job and hired Bio-One Charlotte to do it. 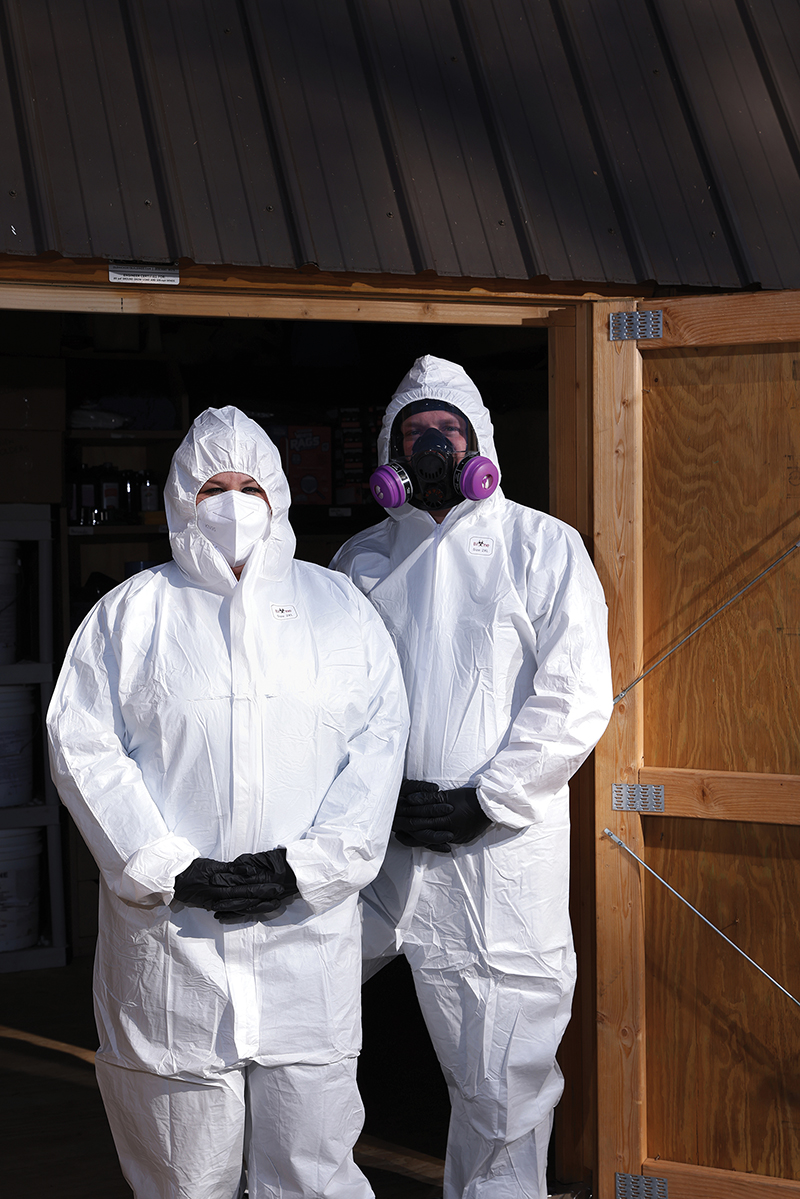 Jen and John Symons bought the Bio-One Charlotte franchise in 2018. Some of their jobs involve hazardous materials, which require them to wear suits.

Bio-One Charlotte is a franchise that Jen Symons and her husband, John, bought in October 2018. They were tired of working for others and thought they could handle both the pressure of business ownership and the nauseating, sometimes dangerous nature of this work. Bio-One offers decontamination and biohazard cleanup services. It handles hoarding cases like this one, which require only masks and gloves for protection. But the Symonses and their five employees also clean crime scenes and the aftermaths of unexpected deaths. They scour floors and walls after pest infestations. They wear biohazard suits on those jobs, which the industry refers to as—this is an actual term—“gross filth cleanup.”

No gross filth here, thank goodness. Just a lot of stuff. (When Jen referred to it as a “level five,” she meant among hoarding jobs. Gross filth is off the scale.) Bio-One would ordinarily reserve a few days and charge about $9,000 for a cleanup like this. But the Symonses, who are open to these kinds of deals, have agreed to do what they can in a day in exchange for Quail Hollow Presbyterian’s $3,000. Jen, who used to work in marketing, talks with Angel and me as John and his crew of four—three men, one woman—collect boxes and loose items and carry them outside to sort. The family wants to keep or donate some. The rest go into the two enormous orange dumpsters on the lawn.

John offers a quick hello on his way out the door with a load. They can’t waste time. When someone contacts the Symonses, things have gotten bad.

The Symonses moved to Charlotte from the Flint, Michigan, area in 2007, when both were in their early 20s. Jen secured an internship at Ballantyne Country Club that turned into a marketing and event planning job. John worked in restoration cleanup, resurrecting homes and businesses damaged by flood or fire. Big messes don’t faze him.

A decade in, both were ready to start a business of their own, and they tossed ideas around. John, with his years of work in restoration, suggested crime scene and biohazard cleanup. He could do the heavy lifting. She could network and market.

But she eventually accompanied John to Bio-One’s corporate headquarters outside Denver for a Discovery Day, the franchising industry’s version of a meet-and-greet. Bio-One, founded in 2006, began to sell franchises in 2010 and has since exploded into a nationwide system of 115 independently owned businesses and a secure spot on Entrepreneur magazine’s annual list of the top 500 American franchise systems. The Symonses sat at a conference table in Colorado with other potential franchisees and absorbed what the Bio-One executives had to show them. 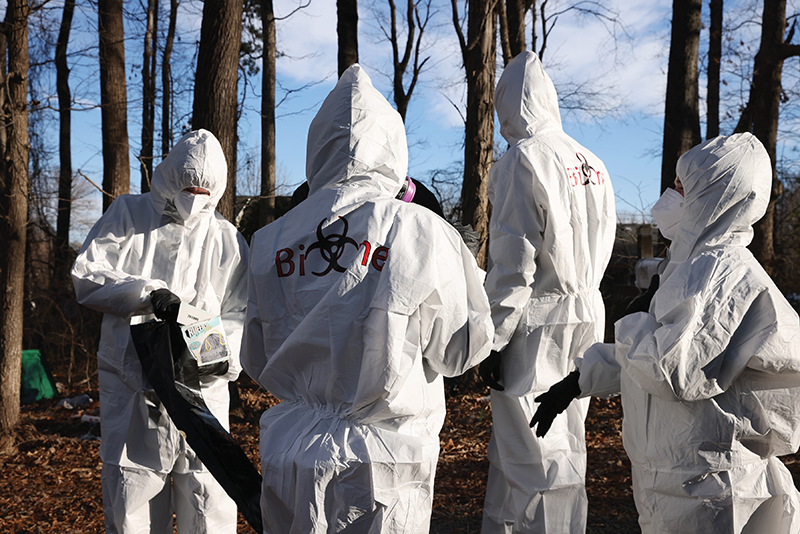 Bio-One Charlotte started with only the Symonses but has taken on five employees. Here, a cleanup team prepares for a job in Matthews (above), then begins clearing debris outside the home (below). 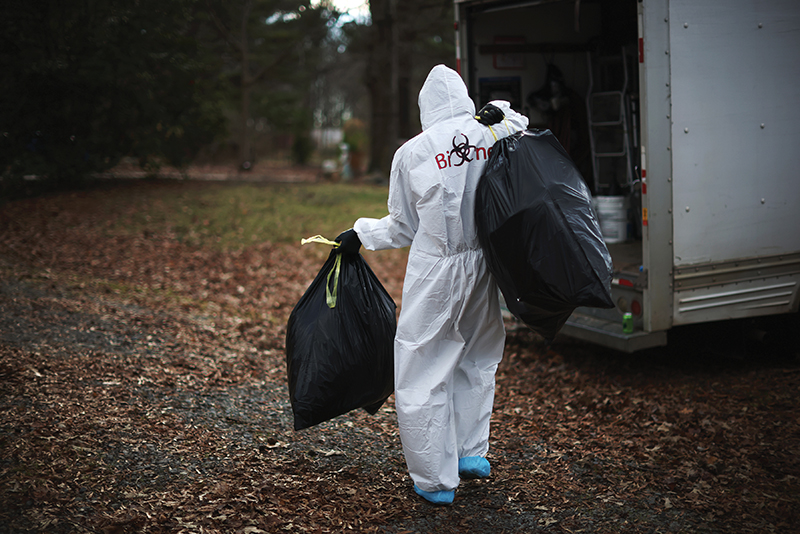 Bio-One didn’t hold back. The folks in the room viewed images of body outlines on floors, along with blood and other bodily fluids, where people had died and lain undiscovered for days. Jen recalls a particularly gruesome image of an eyeball, just lying on the floor. Sometimes, she tells me, “coroners take the body but not the other bits and pieces.”

The Symonses looked around the room and saw some second thoughts on prospective franchisees’ faces. This clearly was not for everyone. But someone had to go into those homes and clean up, right? The more she thought about it, the less crazy it seemed. She thought about Bio-One’s motto: “Help First, Business Second.” They could do this.

“We found a company that wasn’t doing something very common,” Jen says. “You have to be unique to stand out, and this is a niche service that people will always need.”

They secured loans to cover the franchise fee and six months’ worth of family expenses. It was tough, as it usually is for a new business owner. John and Jen did everything themselves in the first year and worked ridiculous hours for the first two. But after a year, they were doing well enough to hire two people. In the past two years, they’ve hired three more. That’s helped ease their schedules; John is 38, Jen 36, and they have two young daughters—9-year-old Lola and 7-year-old Lana. After four years, the Symonses, who now live in Rock Hill but work throughout the Charlotte area, can take a breath now and then. 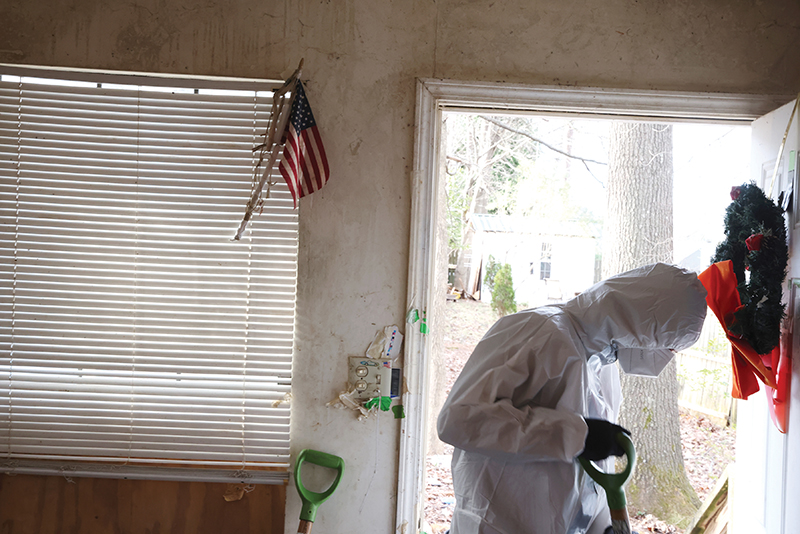 Cleanup of “gross filth,” as in this Matthews home, can be dangerous for the crew and humiliating for homeowners. By the time someone calls Bio-One Charlotte, things have usually gotten bad.

And COVID, which derailed many an entrepreneur’s best efforts, only heightened the demand for cleanup services. In July 2020, using federal CARES Act money, the Mecklenburg County Department of Social Services hired Bio-One Charlotte to disinfect the homes of residents 60 and older. The Symonses and their employees disinfected more than 1,000 homes over the next year, and the nationwide Bio-One system jumped from $25 million in systemwide sales in 2019 to nearly $80 million in 2020, founder Nick-Anthony Zamucen told the trade publication Franchise Times in May 2021.

“I like to say we were doing infectious disease control before COVID,” Jen says. “So we had everything in place, and we were able to have a seamless transition.”

The work has often been as nasty as Bio-One promised on Discovery Day. At one Charlotte home, a woman hoarded cats along with other things, which left only enough space for her to shuffle down the hall with a walker, in bare feet and stepping on cat feces. The cats used the bathtub as a litter box. Even in a biohazard suit, John had to step outside to stop gagging. 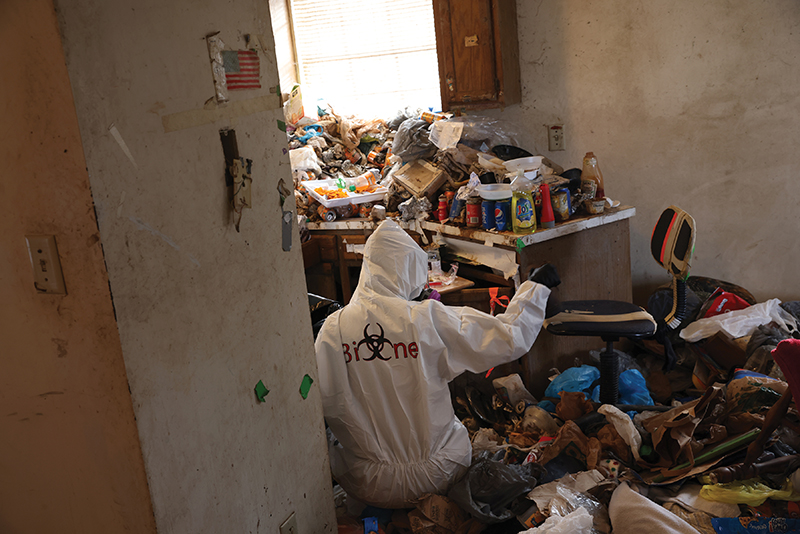 Jen Symons overcame her initial hesitation to buy the franchise when she realized they could stand the frequently unappealing aspects of the work.

On another job, a cleanup of a tractor-trailer’s sleeper berth after the driver had died there, the cab showed no sign of a violent death. John and his crew wondered what had happened. The truck yard owner told them it was a case of autoerotic asphyxiation. They looked again, discovered the rope and porn, and decided this was not something the family needed to know. Discretion is important, and caution, too; Bio-One technicians have grown accustomed to taping shut the sleeve and pants-leg openings of their suits on pest decontamination calls. They don’t want to bring home any unwanted visitors.

But the work makes room for compassion, as in Donald and Dora’s house in south Charlotte. When homeowners’ insurance policies cover cleanup, Bio-One works directly with insurers, and the Symonses waive their deductible fee for clients in law enforcement and for child deaths. “Many times, people see us as the enemy at first, but we’re not,” Jen says. “We’re there to help.” Those concessions, she adds, mean “one less thing for people to deal with on one of their worst days.”

The south Charlotte job takes all day. By 5 p.m., the two orange dumpsters on the front lawn are full. The job’s not finished—there’s still some clutter to clear—but the task is manageable now, and you can see the floor.

“We’re the kind of people who like to get a job done. We’re those people who unpack the first hour when we get home from a trip,” Jen tells me later. “That type of personality works well for this industry. And we love getting homes back in order.”

Angel has trouble containing her relief. “They were great and did a phenomenal job,” she says. “I’d love to have them back to do more.” That’s out of the question for now, unfortunately, but a family that had trouble seeing their way out from under the accumulation of years now has a clear path ahead. “The burden,” Angel says, “is lifted.”

Allison Futterman is a writer in Charlotte.