Yunta’s menu is full of Peruvian terms you may not recognize, but the restaurant makes it easy to figure out what’s what. A glossary in the lower left corner defines them, and your server can translate anything you don’t understand. Yunta (pronounced YOON-tah) means “friend” in Quechua, the language of the Incas.

Yunta serves Nikkei cuisine, a fusion of Peruvian ingredients and Japanese cooking techniques. It stems from Japanese migrants (known as Nikkei) who came to Brazil and Peru in the early 20th century to work on sugar plantations. As they cooked their traditional dishes with local ingredients, a new cuisine emerged. Think raw fish with ají verde sauce and sushi rolls with punches of citrus, garlic, and Peruvian corn. 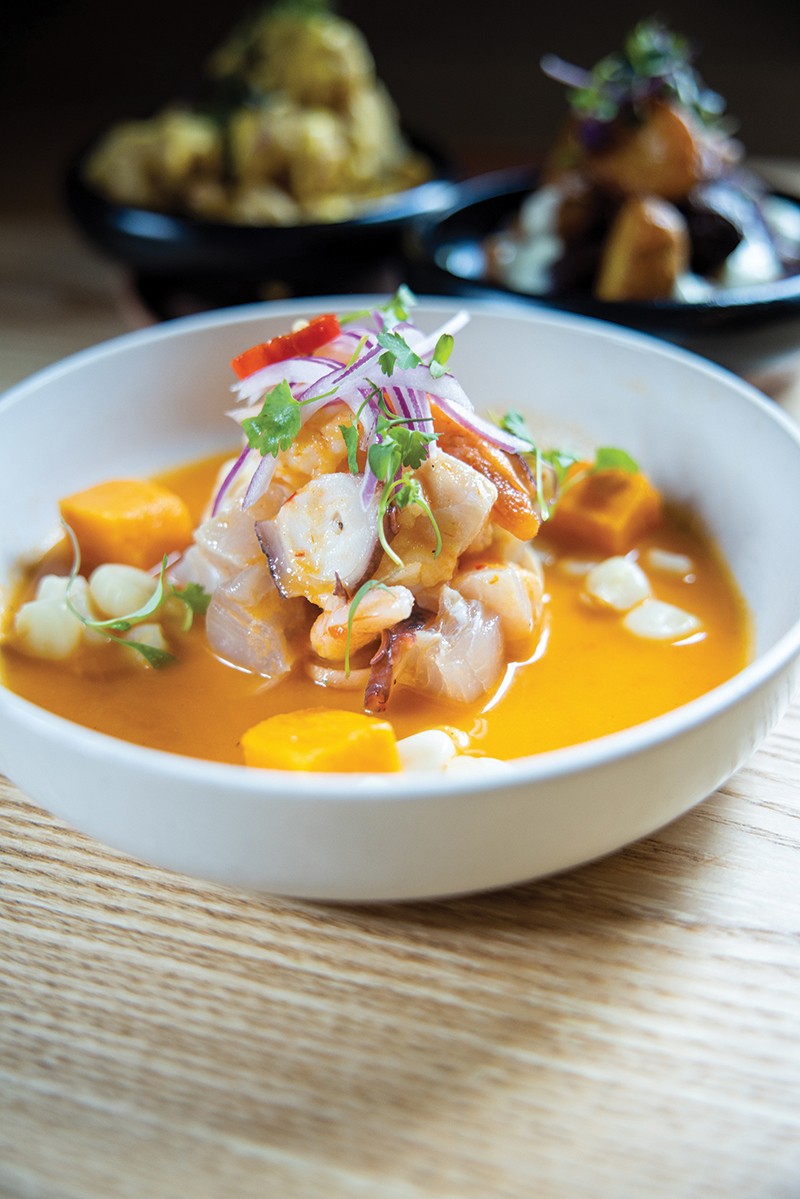 Ceviche is a distinctly Peruvian blend of seafood cured in citrus juice. Yunta serves four varieties, including this one with shrimp, octopus, squid, and the catch of the day.

Randy Garcia and Bruno Macchiavello, the team behind Viva Chicken, opened Charlotte’s first Nikkei restaurant in March in the space next to The Wine Loft on South Boulevard. Garcia’s wife, Cinthya, also a co-owner, is a native of Peru. So is Macchiavello, who serves as executive chef, and Daniel Davila, Yunta’s itamae, or master of the chopping board.

The space is nothing like the fast-casual setup at Viva Chicken. Yunta’s interior is dark and moody, with concrete walls, an industrial ceiling, and tan leather banquettes. Potted agave and ferns dot the open shelves above the 360-degree bar in the center of the dining room, and living plant walls adorn the hostess stand and patio. Electronic dance music gives the restaurant a fun, clubby feel, but it’s not so loud that you can’t hear people at your table. 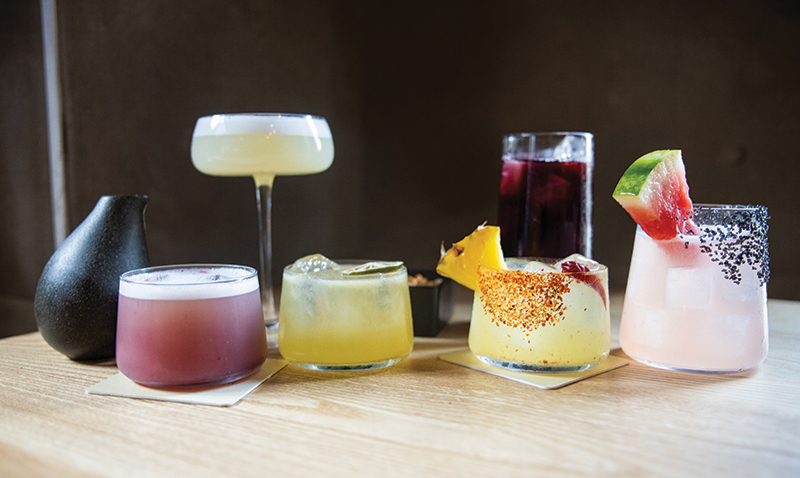 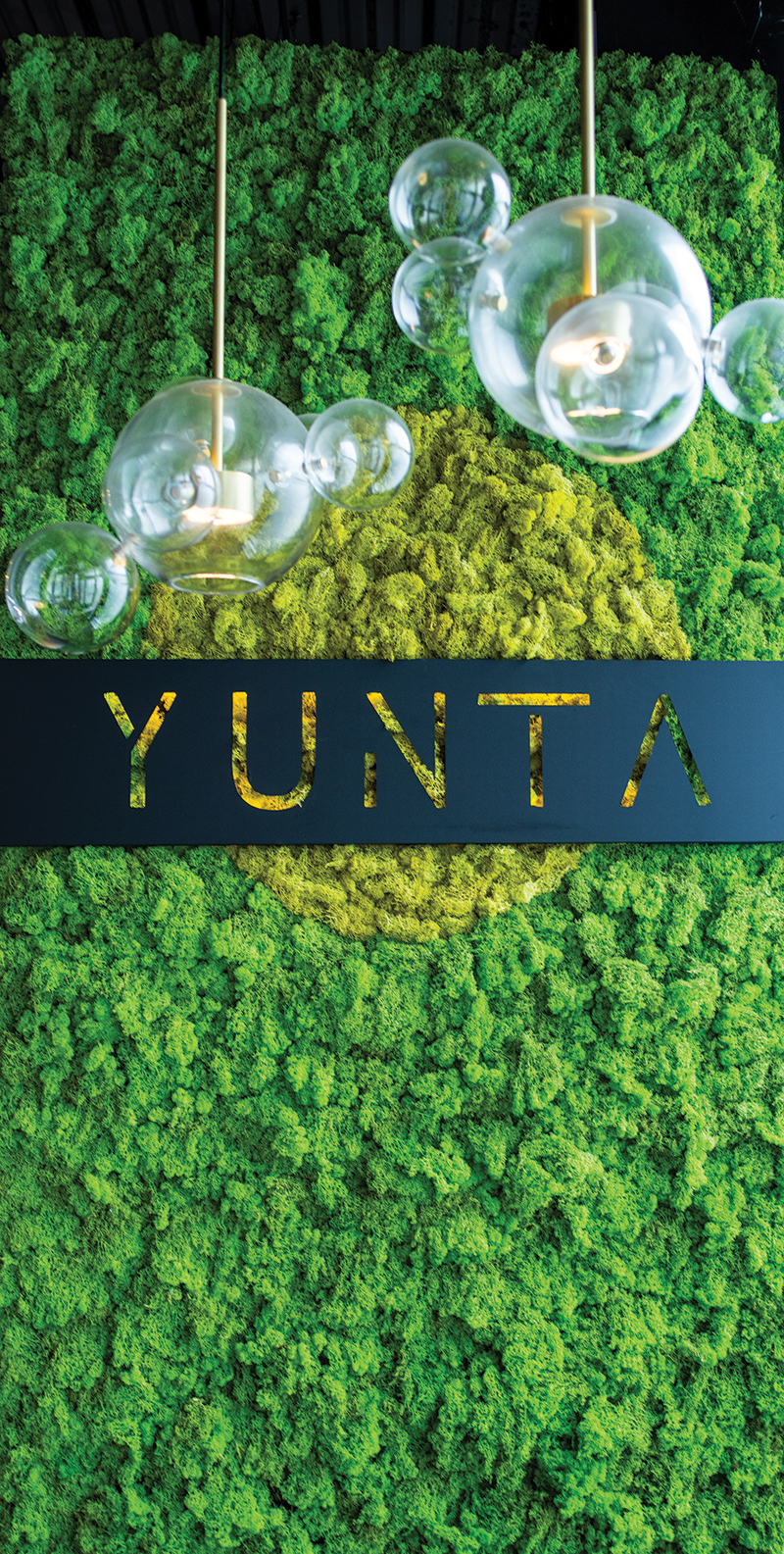 Mixologist Bob Peters designed Yunta’s cocktail menu, which highlights the national liquor of Peru—pisco, a grape brandy. The Pisco Sour ($12) mixes lime, simple syrup, and your choice of flavored egg white foam; try the passion fruit or violet foam for a subtle floral taste. If you like your cocktail with some bubbles, try the Pisco & Smoke ($12), which has ginger beer, or the Nikkei 75 ($13) with sparkling sake.

They also serve nonalcoholic beverages, like Mexican Coke in eight-ounce glass bottles, Peruvian coffee, and a rotation of Peruvian juices. If you’re in the mood for something different, go for the Chicha Morada ($4), a purple corn punch with spiced apple and cinnamon that tastes like Christmas in a glass. 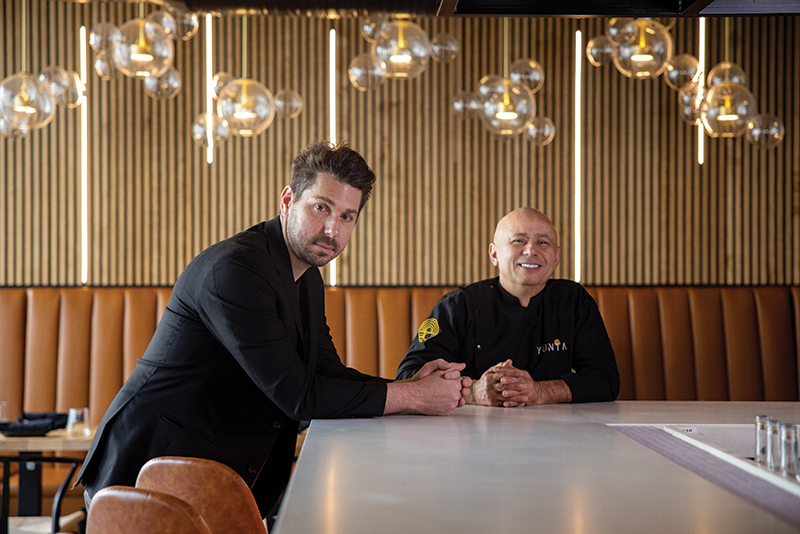 Your server will bring you a complimentary bowl of cancha (toasted corn nuts) to munch on while you peruse the menu. Start with an order of Yuca Balls ($10), stuffed with a mild, soft cheese and served with a side of ají carretillero sauce; or Chicharrón ($12), chunks of crispy pork belly, sweet potato, and chalaquita (a Peruvian pico de gallo). For something lighter, try the Yunta Ceviche ($17), a fresh, citrusy mix of shrimp, octopus, squid, and the catch of the day. 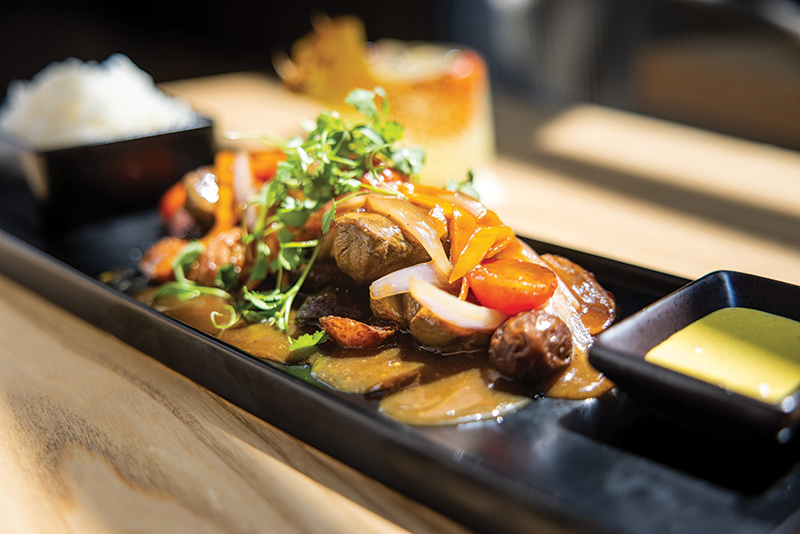 CLomo Saltado (above) is a traditional Peruvian stir-fry with marinated strips of sirloin. Side dishes include Andean Potatoes (below). 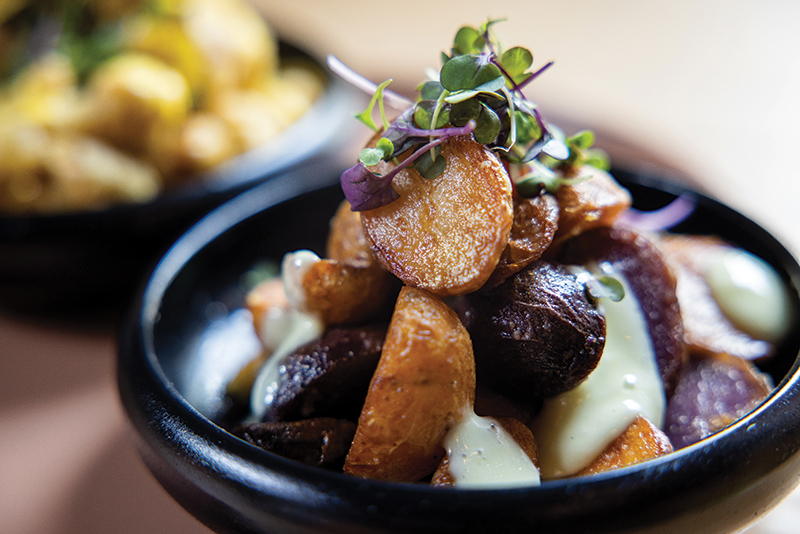 If you like your dinner with a show, order the Beef Nigiri ($15) and watch your server sear the tenderloin with a blowtorch when they deliver it to your table. The combination of pressed sushi rice, charred beef, chimichurri, and lime is a merry-go-round of flavors.

The sushi menu has just four selections, and don’t expect California rolls. The Parmesano Maki ($15) is the most unexpected roll in the lineup, combining Japanese fried shrimp, scallops, avocado,  lime, and Nikkei butter topped with shaved Parmesan. If you think Parmesan and sushi don’t belong together, this will change your mind. 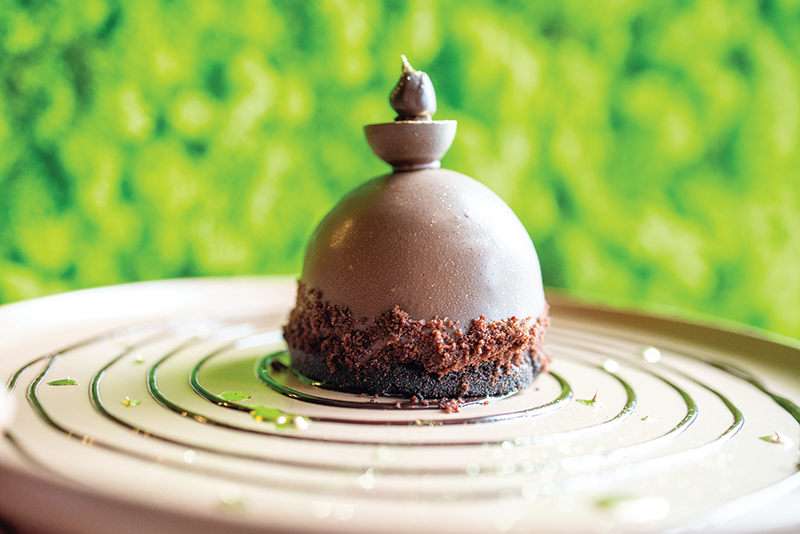 The Lúcuma Chocolate Bomba (above) is made with lúcuma, a fruit native to Peru.

Maybe you didn’t plan to order dessert, but you’ll reconsider once you see servers emerge from the kitchen carrying an exquisite chocolate dome with flecks of gold leaf. That’s the Lúcuma Chocolate Bomba ($12), an orb of lúcuma mousse (lúcuma is a fruit native to Peru) coated in chocolate ganache and drizzled in pisco syrup. It may not be the reason you came—but it’s why you’ll want to return. 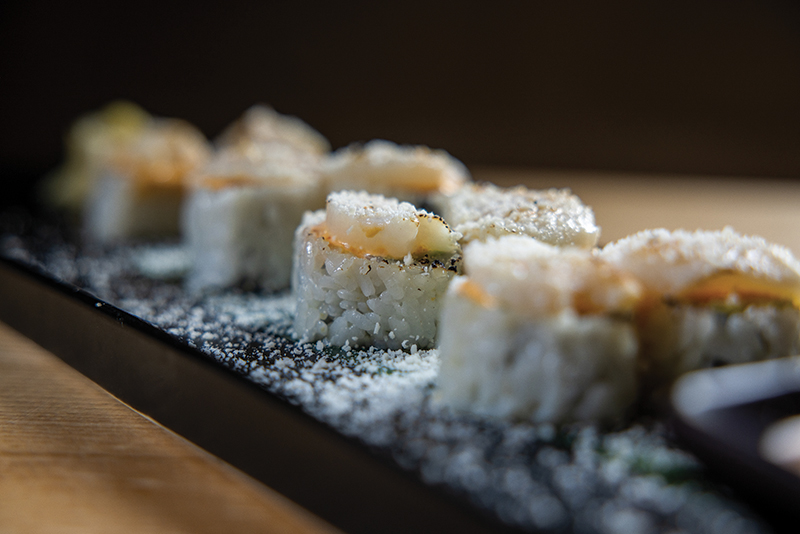