Home/Uncategorized/Editor’s Note: Where Is Jim Bakker Now, Now?
Previous Next 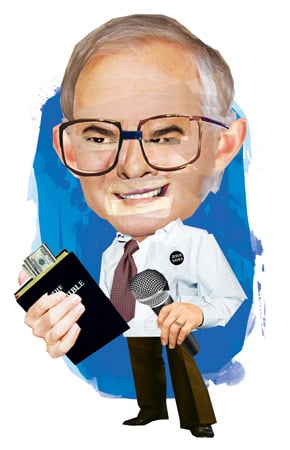 I FIND IT FASCINATING THAT Ken Garfield’s 2010 story, “Where Are They Now?: Jim Bakker,” is still one of the most-read stories on charlottemagazine.com. At fewer than 700 words, the article sits just below our annual “50 Best Restaurants in Charlotte” and right above “50 Things Every Charlottean Should Do” on the all-time top 10. That rank speaks to the phenomenon that was Bakker, the disgraced, Charlotte-based televangelist whose empire crumbled after sexual misconduct allegations, fraud conviction, and imprisonment in the late ’80s.

It’s been even more active lately, as a major studio film hits theaters this month: The Eyes of Tammy Faye. It stars one-time Spider-Man Andrew Garfield as Bakker and Jessica Chastain as his equally famous, glamorous ex-wife, the late Tammy Faye Messner. The movie was filmed in the Charlotte area over the past couple of years. Among the locations to look out for: Heritage Tower in Fort Mill, which was part of Heritage USA, the Christian theme park operated by the Bakkers.

Bakker was released from prison in 1994. Ken’s great story offered this 2010 update: “At age seventy-one, he preaches God’s love while peddling Jesus pendants and the like from a new Christian retreat in Blue Eye, Missouri, which looks a lot like his old Christian retreat in Fort Mill. More than twenty years after he rose to fame and fell to shame at PTL (‘Praise the Lord’), he’s doing pretty much the same thing, but without nearly the same following and without overselling lifetime memberships.”

Given that it has been 11 years since “Where Are They Now?: Jim Bakker,” I thought it prudent to provide another update. Bakker still has a TV show and ministry in Missouri. But over the last year, the government’s been knocking at his door again. On his program, Bakker advertised and sold colloidal silver supplements touted as a COVID cure, and a rash of lawsuits followed from the attorneys general of Missouri and Arkansas, among others. (Bakker is repped by former Missouri governor Jay Nixon in his own suit against the state.)

In April 2020, he told viewers that his ministry was nearing bankruptcy after he was prohibited from making credit card transactions. The Missouri AG’s suit was settled this past June, with more than $150,000 to be paid to those who bought the silver solution. The case shows that while Bakker’s story continues to capture audiences, he continues to enchant viewers in the most insidious of ways, as well.