Don’t miss the ferry by trusting your GPS too much

Don’t miss the ferry by trusting your GPS too much

Maybe the slogan on U.S. paper money should be changed from: “In God we trust.”

Maybe our money slogan and our country’s motto should be changed to: “In GPS we trust.”

Our faith in GPS has become so strong that it sometimes leads us into bad situations. 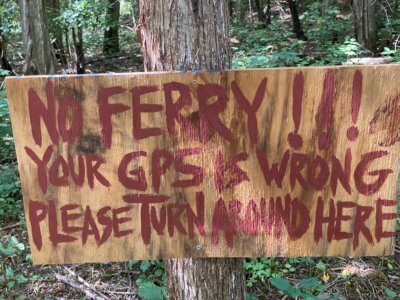 Courtesy photo. Some area kids have even taken matters into their own hands and paint brushes to make a homemade sign that is still sometimes defeated by drivers with severe cases of GPS disorder.

For example, it doesn’t matter what your GPS says — there is not a ferry at the end of Cedar Beach Road. Or Turtle Moon Road.

There is even a professional, official, highway department-type sign at the beginning of Cedar Beach Road, right when you turn off Converse Bay Road, saying, “No ferry.”

How do you make it clearer than that?

But still some drivers ignore the sign and follow their GPS, like cultists waiting in line for a drink made from an artificially flavored mix served by an anthropomorphic pitcher, because their global positioning system tells them there’s a ferry that way.

Drivers who are really GPS brainwashed sometimes turn onto Turtle Moon Road near the end of Cedar Beach Road, ignoring the signs that identify Turtle Moon Road as private and not to be trespassed upon — even by vehicles.

Sometimes they even actually ignore the handmade sign some kids put up on clearly private property on Turtle Moon Road that says: “No ferry. Your GPS is wrong. Please turn around here.”

“It’s pretty clear once you’re on it, it doesn’t lead to anything. But people still do it,” said Dave Finney, who owns a home on Turtle Moon Road. “And they always say the same thing: ‘Well, we were just following our GPS.’”

Turtle Moon Road is a sort of rough, unpaved road, not for the faint of heart. The kind of road that makes aficionados of four-wheeling salivate.

It’s hard to understand, even if there were not signs, how anyone could think it was a road to a ferry. Even with the GPS woman screaming at you to keep going.

This reporter had to try it for himself. Sure enough, once I got on Converse Bay Road in the vicinity of Cedar Beach Road with “Charlotte Ferry” plugged into the Google Maps function on my cell phone, it wanted me to head down the road to the ferry that was not there.

I forgot to check out “Here be dragons” to see where it sent me.

It was a dark and foggy day or night — a 2018 Burlington Free Press story didn’t report which — when three visitors from Connecticut ended up driving their borrowed car to the bottom of Lake Champlain.

They all managed to get out safely, if not dryly.

The driver said he was following GPS on the Waze app, which directed him to turn onto the boat launch near the Coast Guard station in Burlington. He and his passengers had slid 100 feet into the lake before they realized what was happening.

The Burlington resident who loaned them her car was skeptical about their story, but she found her GPS directing her into the lake when she tried it.

The police, who suspected alcohol might have been a factor in the mishap, said the driver willingly consented to a sobriety test, which indicated he was not inebriated.

In 2017, Vermont Public, which used to be Vermont Public Radio (a branding change that must have been made by a nonprofit staff paying too much attention to GPS), reported how GPS was directing people searching for some businesses in Bennington, the largest town in southwest Vermont, to the little town of Woodford nearby.

It was even sending people to Woodford who were looking for the Bennington Battle Monument.

It took four months and lots of messages, but finally the GPS Bennington-Woodford problem was fixed.

Finney said neither he nor his neighbors have called Google to see about getting it fixed because they don’t have any idea who they should call.

“People at this point are a little annoyed when people find their whole way down here because we know that they go by some signs. And we just say, ‘You gotta turn around and go back out,’” he said.

Coincidentally, at the end of the road named Ferry Road you will find the Charlotte Fairy … oops, damn autocorrect.