At the time, what was then called the Charlotte Coliseum—not to be confused with the building of the same name that would open on Tyvola Road in 1988—was only three years old. Back in ’58, the tournament invited only 24 teams, and Temple emerged from a seven-team East Regional to advance to the Final Four in Louisville.

The old arena hosted 50 tournament contests until 1987. Then the games moved to the Coliseum on Tyvola, the site of 27 more, followed by 21 at the uptown arena now called the Spectrum Center, which opened in 2005. Charlotte’s been the host city for the Final Four only twice: once for the 1994 men’s tournament and again for the 1996 women’s tournament. But the games played here rank among the most memorable in the event’s history, including a 2018 men’s tournament upset that remains the only game of its kind.

So here are eight notable games (OK, nine; you’ll see what I mean) played over the years in Charlotte. The memories can tide us over until 2024, the next time the Spectrum Center hosts tournament rounds.

In the early 1960s, the Atlantic Coast Conference was one of only two leagues that played a conference tournament after the regular season, and the ACC tournament champion was the conference’s only representative in the NCAA Tournament. “In this part of the country, that postseason tournament was bigger than the NCAA,” says Billy Packer, a Charlotte resident who, for decades, was a prominent college basketball broadcaster for NBC, CBS, and others.

In ’61, Packer played guard for an excellent Wake Forest team that beat Duke for the ACC tourney title, then traveled to New York to play (and beat) St. John’s, then hustled back to Charlotte to take on third-ranked St. Bonaventure. The Bonnies led 37-36 at halftime, but Wake took control in the second half behind the unexpected play of reserve center Bob Woollard, who scored 10 points. Demon Deacons star Len Chappell, a future NBA All-Star, scored 24. (Packer scored seven.) The Deacons would lose to St. Joseph’s in the East Regional final.

Coach Lefty Driesell’s Maryland team had current and future All-Americans Tom McMillen, Len Elmore, and John Lucas. Providence had Ernie DiGregorio and big, bad Marvin “Bad News” Barnes. (I was a young fan with a seat behind one basket, and I had never seen anyone throw a near-full-court, behind-the-back pass until Ernie came to town.) DiGregorio fouled out with 11 minutes left—four of the five fouls were charges—but the Friars still won big: DiGregorio scored 30 points, Barnes scored 19 with 15 rebounds, and shooting guard Kevin Stacom added 24. Providence would lose to Memphis State (now the University of Memphis) in a national semifinal in St. Louis.

Before Coach K and the Cameron Crazies, Bill Foster coached the Blue Devils to the 1978 Final Four with stars Mike Gminski, Jim Spanarkel, and freshman Gene Banks. But they barely survived the first round when an attempted put-back by Rhode Island’s John Nelson just missed at the buzzer. “We played awfully tentative and slow,” Foster said afterward, “and we know we’re lucky to get out of here with a win.” Duke righted itself and made it all the way to the national championship game in St. Louis, where the Blue Devils lost to Kentucky, 94-88.

This was the only time Charlotte hosted the men’s Final Four, and the city had to construct a temporary entertainment district on Tryon Street to accommodate the visiting fans of Arkansas, Duke, Florida, and Arizona. In the championship game, Arkansas’ “40 minutes of hell” defense forced 23 Duke turnovers. Late in the game, the score was tied at 70. Arkansas had the ball. With Duke’s 6-foot-8-inch Antonio Lang closing in, arms raised, the Razorbacks’ Scotty Thurman drilled a three-pointer as the shot clock expired with 51 seconds left. Arkansas fans still refer to it as “The Shot.” 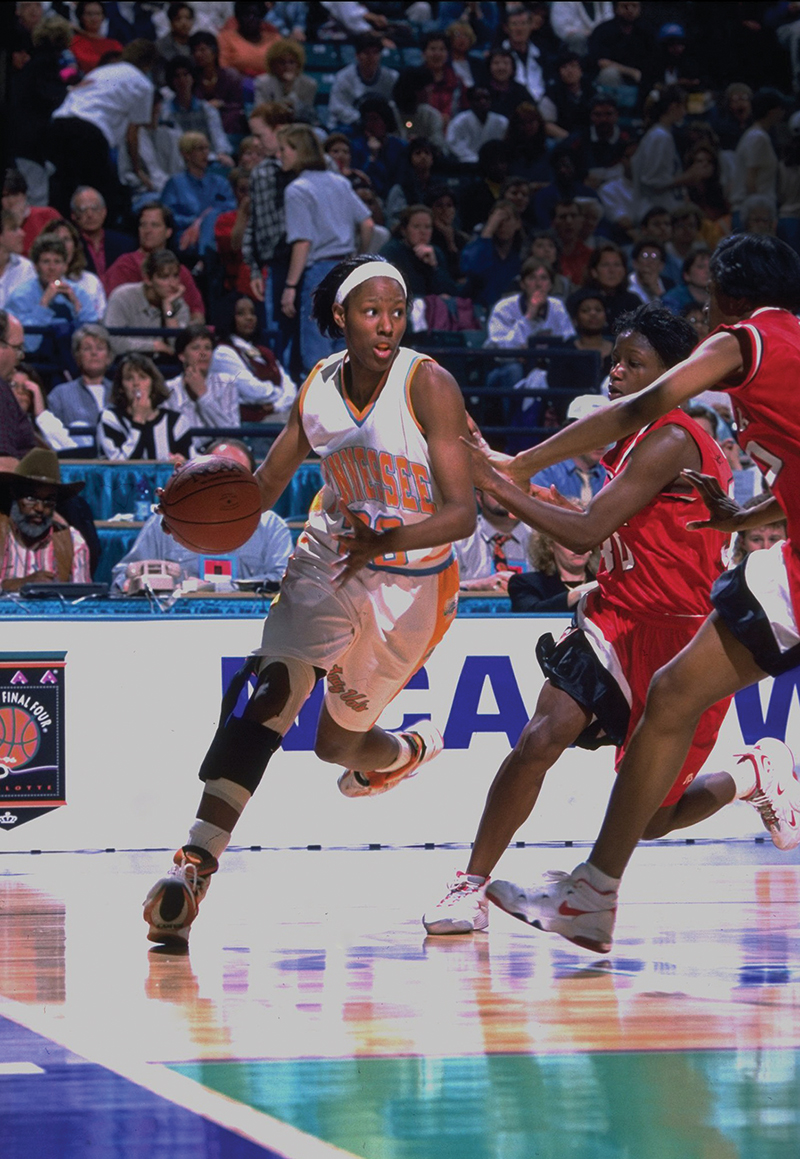 Chamique Holdsclaw of Tennessee as a freshman in the 1996 national championship game against Georgia. The Lady Vols’ victory, in the old Charlotte Coliseum on Tyvola Road, was the climax of the only women’s Final Four in Charlotte. Patrick Murphy-Racey/Sports Illustrated via Getty Images.

Two years later, Charlotte hosted the women’s Final Four for the first and, to date, only time. The Tennessee Lady Vols won their fourth (of an eventual eight) national championship under Coach Pat Summitt, and a sellout crowd of 23,291 got to see four-time All-American and two-time Player of the Year Chamique Holdsclaw, who scored 16 points, as a freshman.

The top-ranked Tar Heels led by 12 at halftime, but Louisville drew even midway through the second half. Then Tyler Hansbrough took over. The four-time All-American and consensus national player of the year made eight out of nine shots in the second half and finished with 28 points and 13 rebounds. Louisville Coach Rick Pitino was amazed by several shots Hansbrough made under heavy pressure: “He couldn’t even see the basket.” The Heels would fall 84-66 in the national semifinals to Kansas, the eventual champion and Coach Roy Williams’ former employer.

East and West Regionals Third Round

The Tar Heels and Blue Devils played what amounted to a doubleheader, in the same arena but different regionals. (Just to add to the confusion, 2011 was the first year of the “first four” round, which turned these contests into third-round rather than second-round games.) Regardless, both North Carolina teams won close contests to advance to the Sweet 16. In the first game, dazzling defense over the final seven minutes brought UNC back from a five-point deficit. In the second, Charlotte Christian alumnus Seth Curry and current Hornet Mason Plumlee helped Duke survive the Wolverines. The defending national champions couldn’t make it past Arizona in the next game, though, and the Heels would fall to Kentucky in the East Regional final. 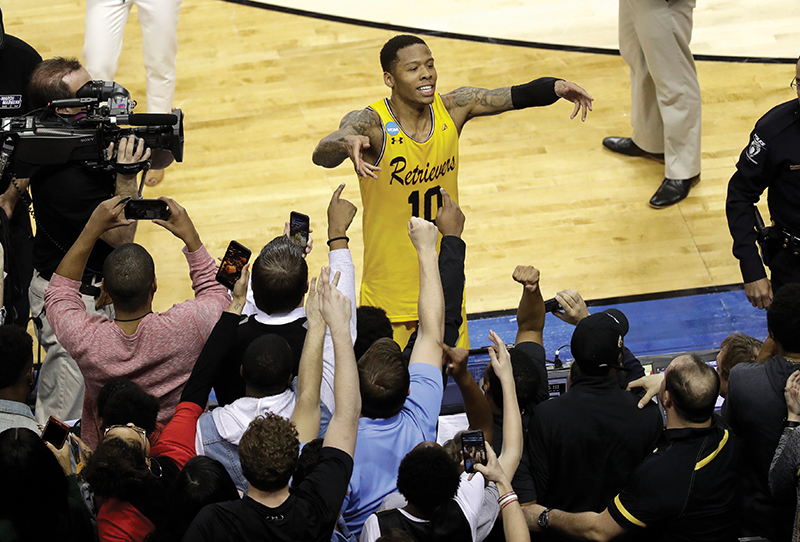 UMBC’s Jairus Lyles celebrates with fans at Spectrum Center after the Retrievers’ stunning 74-54 win over top-seeded Virginia in 2018. AP Images.

It had never happened before. It has not happened since. The NCAA Men’s Tournament expanded from 48 to 64 teams in 1985, and over the next 33 years, top-seeded teams played 135 games against teams seeded 16th—and never lost. Then the University of Maryland, Baltimore County Retrievers came to Charlotte to play Virginia, not just the number one seed in the South Regional, but the number one seed in the entire tournament.

Jaws dropped when the teams finished the first half tied at 21. They descended beneath the floorboards as the Retrievers dominated the second half, led by guard Jairus Lyles’ 28 points. In the locker room afterward, UMBC players yelled, “All brackets gone! No perfect brackets! Put that in the news!” It was, by any measure, the greatest upset in men’s college basketball history, and it happened in Charlotte—on that day, as in days past, the center of the college basketball universe.

Steve Goldberg is a longtime journalist and sportswriter in Charlotte.