Charlotte Town Hall was busy and moving on town meeting day, as this cold and cloudy Tuesday didn’t keep voters away from coming to speak their truth about town issues.

One of these voters was Kristen L’Esperance, 42, who works as a designer.

“There was an exploratory budget for a potential community center that I don’t feel like we need,” L’Esperance said.

“I don’t have children in school so the Champlain Valley School District budget stuff doesn’t really make sense to me. Everything else seemed reasonable,” said L’Esperance.

“I just felt it was my obligation,” said L’Esperance of her reasoning for coming out to vote on issues that were pertinent to her and leaving the others blank. 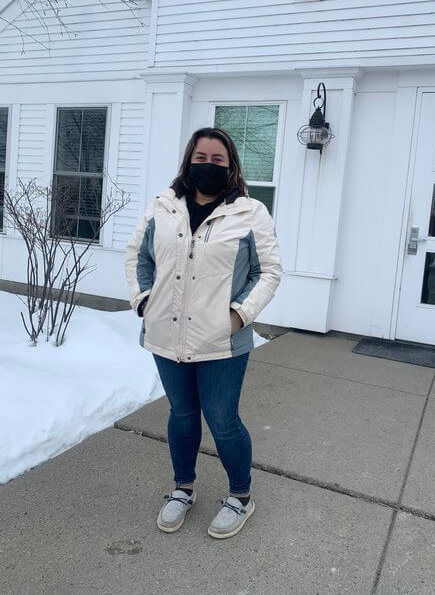 Local Charlotte resident, Madison Denton, aged 22, works as a bookkeeper in Charlotte and braved the cold on Tuesday morning to vote.

Denton came to vote against the idea of the community center building, saying she thinks it will negatively affect Charlotte residents with higher taxes.

“They’re trying to put in the building for the swimming pool and basketball courts, and I voted against it for property tax reasons,” Denton said.

Denton said it’s an unnecessary use of time, money and space.

“That was my main reason for coming to vote today,” Denton said, regarding her second Town Meeting Day experience.

Charlotte resident, age 83, has never missed a chance to vote Joan Weed, 83, has been coming out to vote her entire life, and this year’s Town Meeting Day was no different.

Weed even put on an old pair of dazzling blue-stoned earrings for the event, in honor of the importance of the occasion, coming out to vote, even during the COVID pandemic.

Weed grew up in Connecticut, doing most of her voting down there where the voting is “far more political, believe it or not,” she said. “Up here, at least locally, it doesn’t matter, at least to me, what party you’re in. We don’t think about what ticket you write, we think of who’s running and if they’re worthy of the office.”

As she left town hall, Weed said, “I’ve been reading about the fire department budget and the potential for the new community center issue and also the library, which was pulled out of the budget and put in a different category.”

Weed was unsure, however, how to vote regarding the community center, wavering back and forth regarding supporting the study for the potential new building, ultimately deciding to vote against the idea.

“The first president I was able to vote for was John Kennedy, it was a wonderful thing, and you wouldn’t believe how excited we were to vote,” said Weed. “I’ve been voting my whole life and I believe we should, and that we should read up before we vote, and be responsible for what we say.” 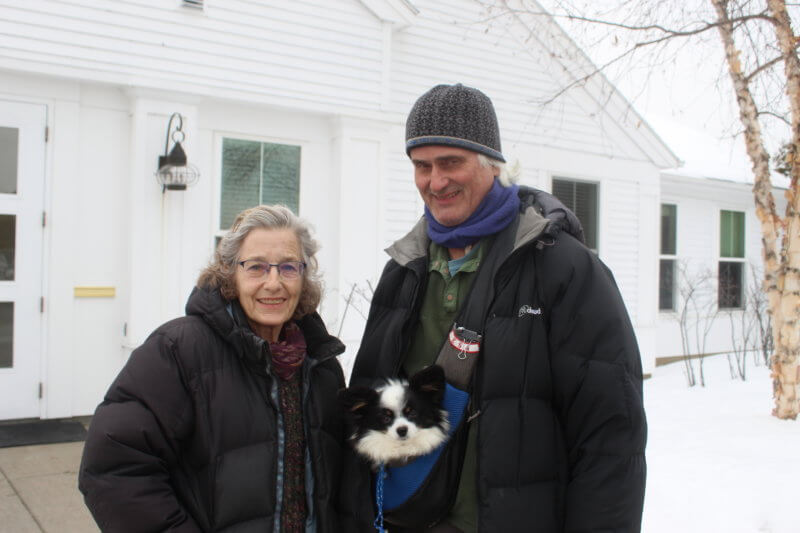 Jonathan Freese, who has a very appropriate last name for the Town Meeting Day weather,  came with a Chickadee, a small black and white papillon who rode in a pooch pouch on Freese’s chest.

Freese said he always votes. Chickadee could have cared less about the proceedings and never votes.

The biggest issue in Tuesday’s town ballot for Freese was the community center. “I wasn’t thrilled about that.”

“I found it a little mysterious as to what the fire department’s budget was all about,” Freese said, the Charlotte Fire and Rescue Departments budget was “not entirely clear.”

His wife Sallie Mack came out of the Charlotte Town Hall in the middle of the conversation, but her immediate response to the question of what her biggest concern on the ballot was the same as his — the proposed community center.

Mack said she thought a community center would be great except “there’s so many other more needs in the community.”

She is also concerned about the size of the Charlotte Fire and Rescue Department’s budget.

“The fire department’s budget is twice as expensive as Hinesburg’s,” Mack said. “I don’t understand why and they don’t really tell us why. There’s no transparency.”

Mack would like to see if Charlotte and other nearby towns could combine rescue departments and save money, but she admitted she wasn’t an expert on the subject and the issue is not really in her “wheelhouse.”