It’s a warm Saturday evening in mid-May outside Event Masterz, a venue near the intersection of interstates 77 and 485 in southwest Charlotte. I join a growing line of about 100 people that extends around the front of a low-slung brick office building from which soft, rhythmic thumps emanate in an otherwise silent industrial park. We’re all here for the same reason, the same guy. He’s not a rapper. He’s not a producer. He’s not a DJ. “Gene Brown is my dealer.” Or so say the T-shirts for sale in the lobby.

Tonight is the Gene Brown Beat Down, a music showcase where star producers, including Just Blaze (Jay-Z’s “Public Service Announcement”) and Jake One (J. Cole’s “m y . l i f e”), will combine vinyl record samples and recorded sounds to create energizing, crowd-swaying beats. It will unspool into the wee hours of Sunday morning, a tapestry of sound stitched together by the man in black boots, a black sweatshirt, and a black beanie who circulates through the crowd. This is Brown’s creation, a step toward a more inclusive music culture in Charlotte, and he orchestrates it from the unique perch he occupies in the world of hip-hop.

What Brown deals, as the T-shirts proclaim, is vinyl. For more than two decades, he has sold old records to producers who mine them for samples they use as seeds for hit songs. He takes a stack of records to them, plays a few seconds each from assorted tracks, and unloads the vinyl on the spot. He prides himself on being the guy who found the sound that became the hit. And he is that guy, at a prolific rate: His ear has unearthed the foundations of songs by everyone from Destiny’s Child to Drake.

“He’ll pick a record, he’ll look at the back, look at the record, and say, ‘OK, this one has …,’ and he will go to the exact part of the song that he knows you’re gonna like,” fellow North Carolinian 9th Wonder tells me later. “It’s unreal.”

Hip-hop has constructed itself on a slab of samples, going back to when Grandmaster Flash made ample use of “Apache” and roomfuls of producers began to dip into the well of “Funky Drummer” in the 1980s. Artists since have raided the soul, jazz, and R&B archives for hooks and beats, and Brown, 48, is a self-made archivist: At any given time, he might have 350,000 records he’s collected from flea markets, vintage stores, and basements, and which he keeps in climate-controlled storage units.

“Basically, it’s the knowledge. It’s the years and years of digging and me having an almost photographic memory, and patience,” he tells me later. “So, me and you go to a flea market or a record store or something, and I’m looking through stuff. I bring my portable player, or if they have a record player or a turntable in the store … I might be in that store eight hours. You’ll be in there one hour at the most.

He knows what producers want because he used to be one. He has also rapped, danced, and DJed. As a child, Brown moved around North Carolina as his father changed jobs, but the family settled in Greenville when Brown was in elementary school. He and his brother pooled allowance money to buy 12-inch hip-hop records. Music always played in the house, the car, and the various clubs his father managed as side gigs. The seven-hour road trips to visit his grandmother in Washington, D.C., were lessons in soul and jazz, both of which his father collected.

By middle school, Brown was playing football, basketball, and baseball. But he never strayed too far from music. In his spare time, he used a pair of mismatched turntables in his room to teach himself the cuts and scratches he heard on hip-hop records. His classmate Moses Barrett III was the emcee, the freestyle king. But Brown could rhyme, too, and one day in seventh grade, he wrote something up for Barrett, boarded the school bus, and made his way to the back, where Barrett normally held court.

“I had something special set up for him at the back of the bus that day,” Brown says. “He was rapping, and then all of a sudden I started, and it just blew everybody’s minds. I got him that day.” Barrett would recover from the incident, both that day (“He got me back,” Brown says) and in the long run: In 2001, under the name Petey Pablo, he became a North Carolina hip-hop eminence with his song “Raise Up.”

Brown’s family moved to Charlotte the following summer, in 1987. At East Mecklenburg High, he and his friends danced against other crews in clubs around the city. He formed and joined rap groups, attended live tapings of The Don Cody Show, and began making his own beats—practices he kept up after he graduated and enrolled at North Carolina Central University in Durham, where he eventually earned a business degree. 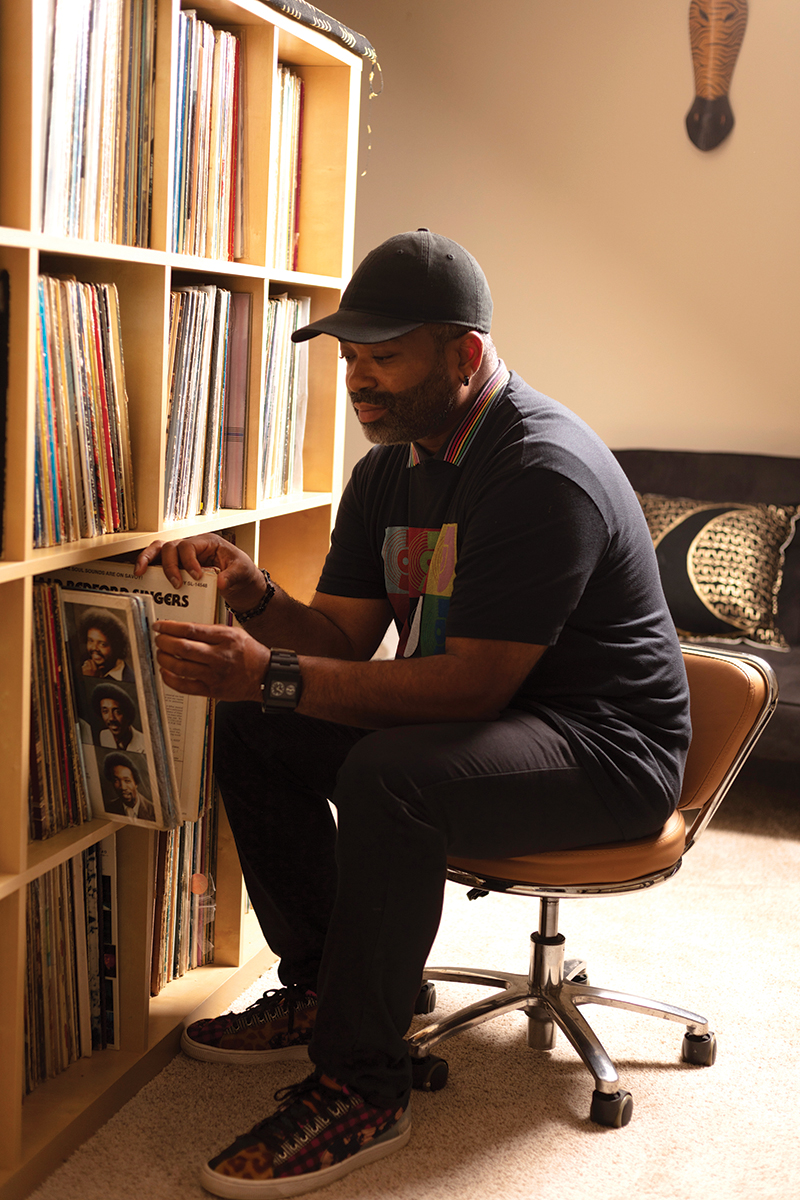 On holiday breaks, Brown traveled to New York and hit record shops, where he discovered that certain rare soul, funk, and rock albums were selling for as much as $800 each. He owned multiple copies of a bunch of them, like Introducing by The Brief Encounter, a 1970s soul-funk outfit from Wilkes County; and The Gospel According to Zeus by Power of Zeus, a Detroit rock band known for its drum breaks. He began to haul his surplus north and trade extra copies for more records.

After he moved to Atlanta, where his daughter was born in 2006, he began to sell them. A friend at one of the New York stores told Brown that big-time producers were coming into the store and buying his records. The friend offered to put him directly in touch with the likes of Q-Tip and Lord Finesse. Soon, his clientele expanded to include Questlove, Don Cannon, and Bink.

“They’d call, I would hook up with them, and they were just mind-blown by the type of stuff I had,” Brown says, “and that I could have the ear to tell what each producer would like.”

Brown moved back to Charlotte in 2008 and began to host pop-ups. Some years, he’d go back to New York for his birthday, throw a party, and invite producers and DJs to perform sets. After the pandemic hit, he decided to bring the birthday party idea home to Charlotte. He hosted the first Gene Brown Beat Down at Crown Station in December 2021, and it was so successful, he decided to do it again in a bigger space—which led him to Event Masterz in May.

Back there the morning after the show, Brown has swapped his all-black outfit for a polo, shorts, and an Atlanta Braves hat. The body heat from last night has dissipated, and the space feels stark in the light of day. Brown has invited a small group of Charlotte’s aspiring producers to attend a roundtable discussion with several of the big-name guests and performers from last night: Sndtrak, E. Jones, Kash, Jake One, and 9th Wonder. Boxes of vinyl records for sale top folding tables in back, where guests make their selections and take places in line. Brown thumbs through each stack, pulls out his picks, then hands them back.

Brown hopes the Beat Downs and day-after gatherings will help build a balanced, rich music culture in a city that hasn’t yet established one. He thinks Charlotte will support those kinds of events as long as someone brings fresh ideas and lineups and generates excitement. “And, you know,” he says, “I got that all day.”

Some of the hits that use samples from Gene Brown’s massive record collection: