Call of the ‘Burbs: The Apartment Boom Right Outside of Charlotte

Home/Uncategorized/Call of the ‘Burbs: The Apartment Boom Right Outside of Charlotte
Previous Next

Call of the ‘Burbs: The Apartment Boom Right Outside of Charlotte


Charlotte’s suburbs are swelling with apartment complexes: off intersections near shopping centers, behind Walmart Supercenters next to four-lane highways, on lots made freshly valuable by nearby train tracks. Up they rise, some with 300 units or more, two-bedrooms, three-bedrooms, with pools, fitness centers, dog parks, “affordable luxury,” and rents that continue to shoot skyward along with the apartments themselves.

This isn’t entirely surprising. Charlotte continues to draw thousands of newcomers every year. They need somewhere to live, and the city is still annexing land at the fringes of a transportation network that directs more routes, for cars and trains alike, into more areas than ever before.

But areas far outside Charlotte’s urban core—far from uptown and neighborhoods like NoDa, Plaza Midwood, and, especially, South End—have traditionally served as the seedbeds for detached single-family homes, often in subdivisions. South End et al. have earned a reputation in the last decade or so as the hubs of urban Charlotte apartment life, where you can rub shoulders with young and affluent neighbors in the elevator before you walk the dog up the Rail Trail to your choice of local brewery.

The suburban developments cater to broader age ranges and different priorities. “In a lot of cases, (new tenants are) chasing their grandchildren,” says John Porter III, president of Charter Properties Inc., which has developed apartments in the Charlotte area since 1970. When adults with children move to the Charlotte area for work, they’re at times accompanied by their retired parents, who want to live near their grandchildren. So the grandparents sell their house and move—but want something more spacious than a standard apartment because, Porter says, “they want a place for the grandkids to come over and stay and sleep and spend a weekend with them. They’re willing to pay for something nicer because they came out of a house.”

As of January, Charter listed three Charlotte-area complexes, all in the suburbs, two across the state line in Fort Mill. The closest is Pringle Square, which opened in 2021 just outside the Interstate 485 loop in the Steele Creek area of southwestern Charlotte. Its 292 units place tenants near a pair of shopping centers that opened in the last decade, Berewick Town Center and Charlotte Premium Outlets, and start with a one-bedroom, one-bath, 600-square-foot apartment at $1,275 per month. That’s in line with the market rate, and it’s an owners’ market.

In broad terms, developers want to build apartment complexes away from the urban core because people will continue to move to the Charlotte area and because land gets cheaper the farther it is from the middle of town. Other factors come into play, too. Developers usually have fewer physical and regulatory obstacles to circumvent with suburban sites and those in smaller, less dense cities like Gastonia, Mooresville, and Kannapolis. In other words, developers can usually build more quickly, with less risk and fewer headaches. Bigger lots also allow for more design options, which means developers can cater to a larger and more varied pool of prospective tenants.

“I think you’re going to start to see more experimentation by developers in suburban markets,” says Ben Yorker, who leads multifamily projects in the South for the real estate development firm Northwood Ravin, which has an office in Charlotte. Especially during COVID, renters in high-rises on small, urban-core lots often felt like they were in prison, Yorker told an audience at a Greater Charlotte Apartment Association breakfast in late January. Developers and renters alike have learned the value of open space. “Just because they want to rent,” Yorker says, “doesn’t mean they want to live in flats stacked on top of other flats.”

The capacity to spread out is a signature advantage of suburban sites—Pringle Square’s 292 units stretch over about 20 acres. Another new complex, Arlington Properties’ Tapestry University City, disperses 352 units on a little more than 13 acres. Tapestry is hardly in the sticks, but the extension of light rail to University City in 2018 touched off a wave of apartment construction in an area that’s always harbored plenty of inexpensive units for students.

Tapestry aims for older, more affluent tenants. “Nestled in Nature,” its promotional tagline reads. “Connected to the heart of the city.” Unit prices start at $1,299 per month for a studio. 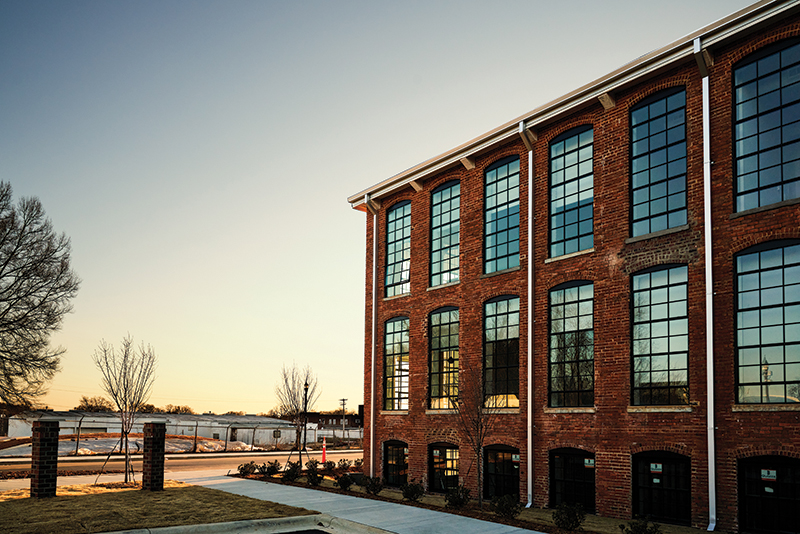 None of this bodes well for people who struggle to find affordable places to rent. Mark Ethridge handles affordable housing development for Ascent Real Estate Capital in Charlotte and serves on the board of Roof Above, the city’s main advocacy nonprofit for the homeless. Ethridge told the crowd at the Apartment Association breakfast that the general economic outlook is rosy for owners and developers, less so for tenants who can’t afford to pay $1,300 per month for a studio. “You wake up every morning,” he says, “and ask, ‘How could it get any worse?’”

Overall demand for apartments shows no sign of slowing, even with new construction all over town and beyond. Developers built nearly 10,000 units in the Charlotte-area market from August 2020 to August 2021, according to a September 2021 report by the Charlotte apartment market research firm Real Data. But in the same year, residents moved into nearly 11,000 units—an indication that demand for apartments surpasses the rate at which developers can build them.

After a mild, COVID-related economic lull in 2020, the market roared back in 2021: Over the same period, the average monthly rent in the Charlotte area jumped from $1,229 to $1,375. The rental vacancy rate, 6.9% as of February 2021, had rebounded to 4.9% by August, according to the September Real Data report. Anything below 10% is considered high demand; 5% might as well be zero. “Demand is expected to keep pace with new supply over the next year,” the report says. “The average vacancy rate will remain below 6.0%, while rents continue to grow at around 5.0%.” And that factors in nearly 22,000 units that, as of August 2021, were either proposed or under construction.

As long as the number of potential tenants meets or exceeds the number of available units, landlords will practically be able to name their price. (In an owner’s market like this, even the unusually high cost of construction materials tends to get passed on to tenants.) “We’re on a high, we’ve been on a high, and history tells us that there will be a low that comes back, but there’s no indication of that happening,” says Engle Addington, a Real Data analyst since 2004. “There’s a low vacancy rate, rents keep going up—so it’s almost like a mad grab: Take what you can get … wherever you can find land.”