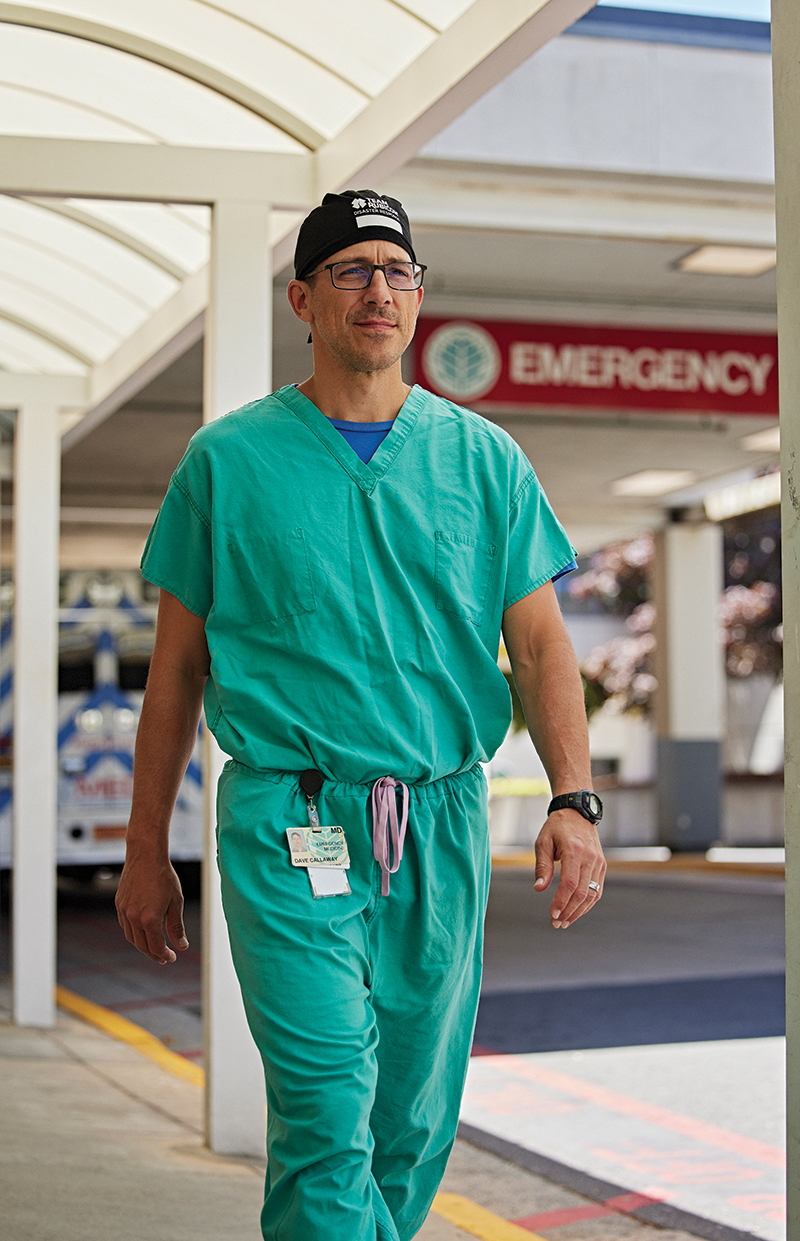 In early March, about two weeks after Russia invaded Ukraine, Dr. David Callaway, the chief of crisis operations and professor of emergency medicine for Atrium Health in Charlotte, went to eastern Europe. He’s also chief medical officer for Team Rubicon, a veteran-led humanitarian aid organization, and he led the effort to organize mobile medical stations for hundreds of people who had fled the invasion.

These were not battlefield casualties. These were people who had to leave their homes without medication and other basic medical supplies. For a week, Callaway set up stations in Poland and western Ukraine. He, Team Rubicon, and those they served had to consider the threat of air raids, cruise missile strikes, and targeted attacks on health care workers—a violation of international law.

“After 20 years of working in crisis zones, I’ve found that my brain is wired to deal with chaos,” he says. “Emergency medicine physicians are trained to do this daily. It’s a willingness to be vulnerable and go into situations where we don’t have all the information.”

The 48-year-old Minnesota native and Navy veteran has led Team Rubicon’s medical team since 2015, when the organization partnered with Atrium. In recent years, he has led teams during MERS and COVID responses; during his military service, he provided medical care in Iraq, Myanmar, and El Salvador. But that was before he had a family. He and his wife of 14 years, Dr. Jenny Callaway, an emergency medicine doctor with Atrium, have two daughters, Ellie, 9, and Lily, 7. They had a hard talk about their obligations as doctors and as parents. But he was willing to take the risk. Helping the displaced, most of them women and children, felt personal.

We spoke over Zoom in late April while Callaway was in Texas to run an international team leader selection course for Team Rubicon. His words have been edited for space and clarity.

Team Rubicon was founded in 2010 after the Haiti earthquake. The initial idea was giving military veterans an opportunity to apply the skills they learned in combat to disaster response. We’re unified by this idea that we have a responsibility to serve. We recruit and build relationships with health care providers so we can deploy the best teams possible to help people in their greatest time of need. We exist to fill these gaps where other aid organizations aren’t responding or the media isn’t talking about it.

Our teams have been in Ukraine since the end of February, and they’re still there. Prior to the invasion, the World Health Organization reached out to Team Rubicon to see if we could do trauma training and coordination. Many of us had national security backgrounds, so we sort of knew what was going on. We thought this could become—and still may become—one of the most significant humanitarian crises of the decade. It could completely roll into destabilization in the midst of a pandemic. We felt compelled to respond.

My wife, for the first time ever—and I’ve been in South Sudan, Jordan, the Syrian border—said, “I don’t want you to go.” She was super supportive, and we worked through it, but it was a really hard conversation. Flying over there, I’m thinking of my daughters. Why am I doing this? Could someone else do it? Sure. I’m not indispensable. Some other doctor could do what I did. But I want Ellie and Lily to know why it’s important to take risks in the service of others. Am I making a better world for my daughters? That’s what guides all of my decisions.

The second I crossed into Ukraine, I was no longer anxious, which may seem counterintuitive. But I was with people I trusted. I believe in the process and navigating the threat, and I feel like I understood it. My job was to help create the assessment teams that went into Poland initially, then eventually Hungary and Romania to address needs.

As we moved into Ukraine with my operations partner, Zach Brooks-Miller, our jobs were twofold. We needed to be there first with our teams to show them we’re committed and willing to do the things we’re asking them to do. Then we needed to make sure the teams were safe and build relationships in the country so they have the right partnerships on the ground in Kyiv.

At home, everyone only saw eastern Ukraine on fire and hospitals and malls getting blown up, but that wasn’t western Ukraine at the time. When we got there, the cafés were open and people were still sending kids to school. So the trick was understanding the risk and explaining it to our families, then taking it seriously enough because we knew the threat would evolve where we were. We had to assume we were going into a war zone.

My first time at the train station—and they didn’t publish the schedules because the Russians could bomb the trains—the train arrived with some women, children, and elderly people. An air raid signal went off, and I paused to watch people’s reactions. Some were annoyed, some ignored it, and some were really scared. We all went into the basement of the train station.

A woman had a 4- or 5-year-old kid who was screaming and crying. She was pulling him in and trying to calm him down. I looked up to this tunnel packed with people. All I could think of was pictures of World War II and underground bunkers of women and children facing this invisible threat of cruise missiles and bombs in the sky. I just kept thinking, Man, when are we going to stop this? In Iraq, Syria, Yemen, it’s the same, and we keep doing it. I have to stay motivated but can’t stop thinking: When are we going to stop killing people and abusing our power with vulnerable populations? 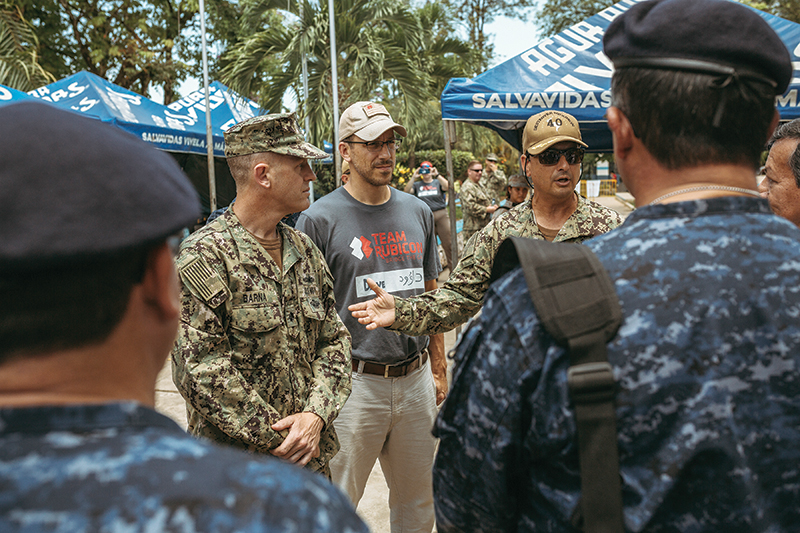 Callaway (left) provided clinical support to the Navajo Nation during COVID. Team Rubicon offers humanitarian aid to Latin American countries like Guatemala, where this photo was taken during a mission in 2018. Courtesy Team Rubicon; Jeremy Hinen for Team Rubicon. 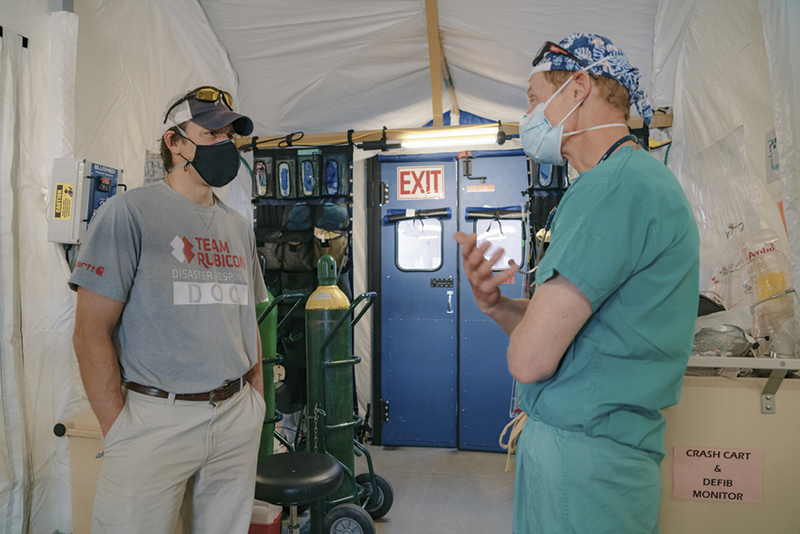 Clothing and gear is tough, because we need the people we’re serving to be able to identify us. Historically, there’s been some protection to that, but a lot of that has been abandoned in combat zones. The protection of humanitarian neutrality is being eroded. The question becomes, do you become a target because you’re all in branded T-shirts? Do you wear them when you’re driving around in a convoy? Probably not. When you’re caring for people? Yes. They need to know you’re a medical provider.

As a lead coordinator with the World Health Organization, I wanted to make sure these organizations saw that Team Rubicon was committed because we sent our senior leaders—and that matters. If the Ministry of Health wants to take a meeting, they want to know our senior leaders are there showing respect, asking the right questions, shaking hands, and not doing it from 3,000 miles away. I helped our team set up mobile clinical care, but our mission has pivoted because there’s been a lot of displacement. Right now, we’re doing capacity-building work and teaching trauma training; mass casualty training; and chemical, biological, and nuclear response training. If they need someone who has experience with blood transfusions, I can go through Atrium and mobilize them to support the Ukrainian civilian health response.

I am so grateful that I have a family and a job that supports me in this work. I’m a professor of emergency medicine, and I’m sitting on a tower in Texas training people to go overseas. The cultural principles at Atrium, this “for-all” principle, can be a tagline—and I’m about as anti-establishment as it comes—but I am so fortunate to work for an organization that believes in this “for-all” mission and empowers a guy like me to go from working for a large health care corporation to doing hands-on work with patients in the field.

I’ve seen a lot of death, so to say the pandemic is what anchored me in the fragility of life sounds weird. But because it was such a broad-scale assault on humanity, everyone was at threat of illness or death. It shut down all of what makes a community a community. It made me pause and look at what matters—family, community—things that get put on a shelf as we go through our busy American lives.

Ukraine is punctuated by discrete spikes of adrenaline, but COVID was a two-year-long stress spike. It was up, and it stayed up; it created long-term stress inoculation. The vaccine debates can suck the life out of medical providers who just want to care for people. Ukraine offered a lot of them the opportunity to go and do good. When they were able to mobilize, they had a new sense of purpose.

If I’m being honest, there are times when I’m really tired and I feel like I’m not striking the balance of being with my family enough. I want to show my daughters how to be an engaged citizen, but at the end of the day, being a dad also means being around and having focused time with my family. No matter how tired, how frustrated, or how cynical I may be at the moment, when I hear Ellie or Lily laugh, it keeps me going.

I get asked a lot, “How do you do all of the stuff you do?” I’ve always had a lot of energy, and I come willing to say yes to stuff that other people don’t want to say yes to. I’m almost 50, so my brain and body don’t keep up like they used to. It’s a lot more challenging now, especially with kids. You get used to operating at a certain level of fatigue. Right now, I’m with Team Rubicon doing a selection course, and I’ve been sleeping in a tent for the last two nights. But I’m working with people who are so awesome and committed, and that recharges me. That—and caffeine—gets me through.

When you have a sense of gratitude, it’s often anchored in a sense of responsibility. This job is hard and challenging and uncomfortable, but no matter how tired I am, when I’m sitting at someone’s bedside, I remember their day is worse than mine. It’s the greatest honor to be entrusted with the fears and hopes of a total stranger. Nowhere else besides the clergy would a total stranger walk up to you and say, “I need your help.” You have to be someone who’s willing to absorb negativity and still show empathy—that responsibility is tremendous, and it’s one of the reasons I became a doctor.

As I’ve gotten older, I’ve held on to this childish belief that we can change the world longer than most people do. Humanity has always been marked by darkness and by tremendous brilliance. If you accept that the good is out there, you can find these moments of grace that inspire you. It’s the nurse that, during COVID, takes the extra step to track down the family member who couldn’t get into the hospital and walks out to the parking lot and gives them a hug. Those individual moments remind you of who we can be. We can drown in the cynicism and the hatred of the world—it’s really easy, especially with all the access to social media. But if we can pause and look at these moments and acknowledge them and be thankful for them—that’s what gives me hope.