Locals referred to it as “the ugliest house in Concord”: a 1,100-square-foot mill house on Glenn Street that was built in 1900 and had been vacant for at least the previous five years. Adam and Jessica Miller bought it in June 2021 for $70,000. The Millers, both studio artists, had renovated four homes over the last decade. But nothing could have prepared them for dummy grenades in the front lawn, a vintage soda can under the floorboards, and snakes—snakes!—in the rotting walls.

“Those snakes had to come out—they make really bad insulation,” Adam says with a laugh. “We were pulling off all the old siding and checking it out and there was a big black snake. I thought it was a galvanized pipe at first, but it started moving.”

The experience was beyond anything the Millers could have scripted. They began to post videos of the project to TikTok under the handle @OldHouseAdam. “After one post,” Adam says, “people went insane.” He shared everything from the snake encounter to tutorials on pressure washing and priming the exterior. Followers asked questions, and the Millers posted links to products and materials they used along the way.

“I don’t feel like any historic homes should be torn down,” Adam says, “unless it’s, like, on fire or crumbling.” 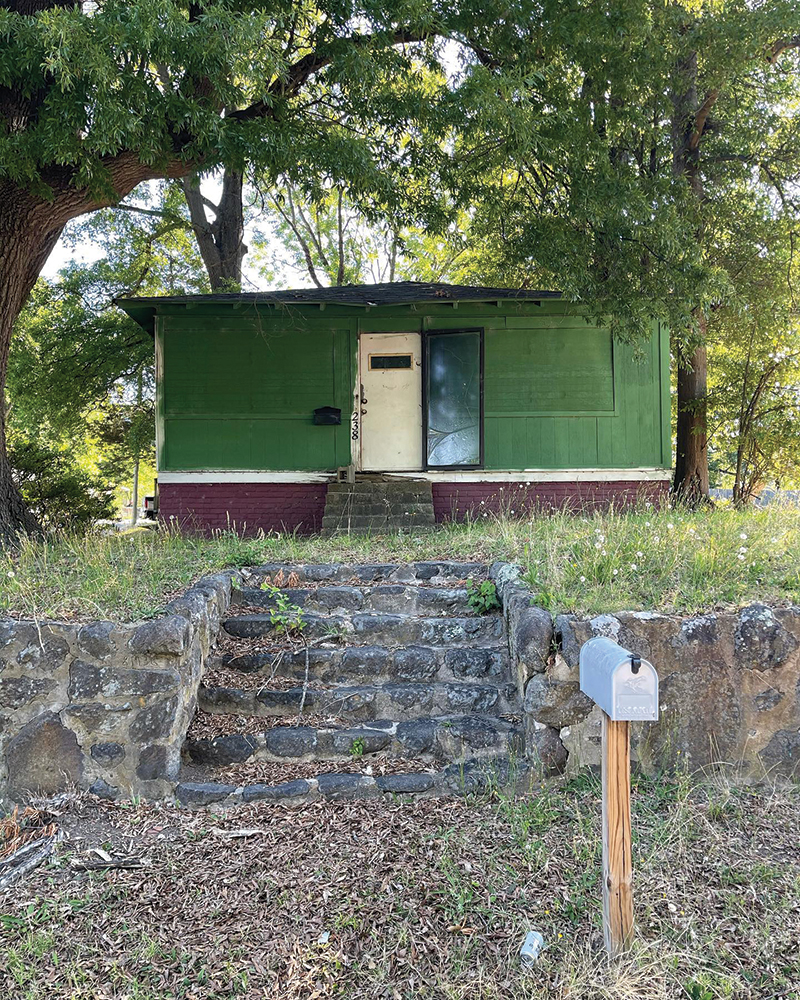 The house had been empty for five years (above). The Millers opened up the front porch (bottom), which the previous owners had closed off to use as a bedroom. Top: courtesy; bottom: Joel Lassiter. 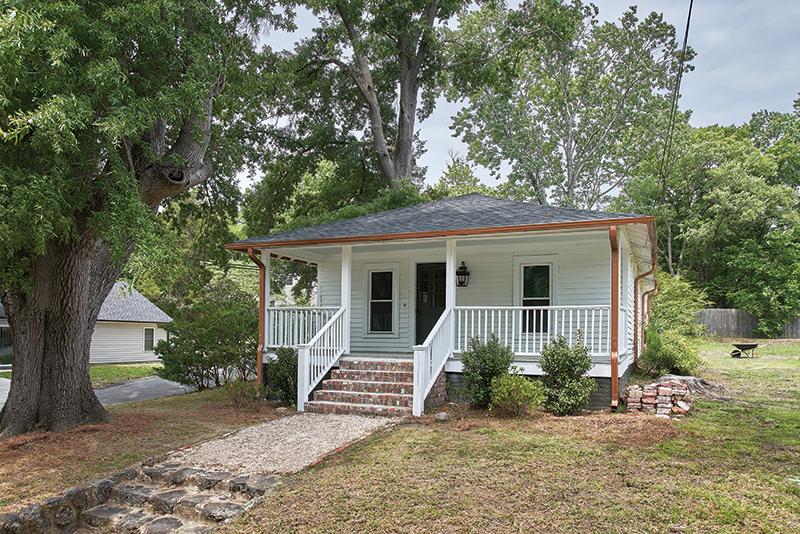 The renovation took nine months. Adam rebuilt the foundation and joist system and installed new plumbing, wiring, and a 22-foot engineered beam to support a vaulted ceiling. They removed the walls from the front porch, which previous owners had closed in and used as a bedroom, and, brick by brick, removed a chimney in the middle of the living room.

Adam remilled as much of the original wood siding as he could. He replaced the rotted wood floors with wide plank pine and secured them with oak pegs, which were common in the late 1800s. “It gives it an interesting contrast and looks artisan and handcrafted,” he says. “You have to do that all by hand and hit the right joist.”

Jessica decorated the interior with a mix of bargain finds and vintage pieces. For the living room, she found a fireplace mantel on Facebook Marketplace and installed antique teal tile around the hearth. Another Marketplace find: a 1920s cast-iron tub that Adam placed in a secondary bathroom and reglazed. 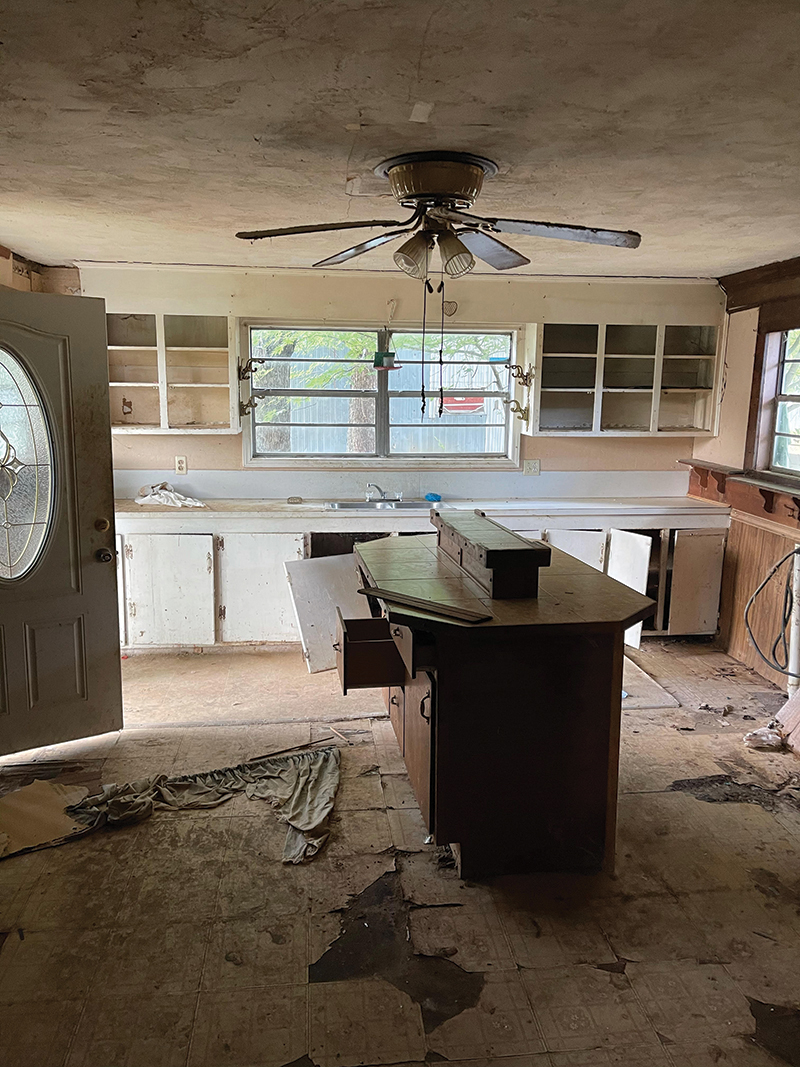 Adam replaced the rotted wood floors in the kitchen (above) with wide plank pine (below) and secured them with oak pegs, which were common in the late 1800s. “I’d never gone to that depth, stripping the house down to the studs,” he says. “Everything we put in that house had to feel like a craftsman did it in the 1900s.” Top: courtesy; bottom: Joel Lassiter. 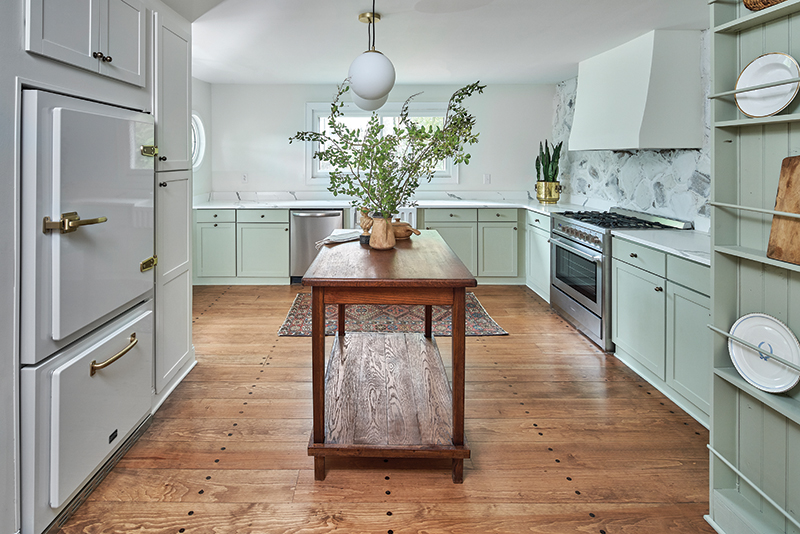 For the primary bathroom, they added 100 square feet to the back of the house to accommodate a walk-in shower. Jessica chose a patterned floor tile and gold hardware and fixtures for a modern twist, and she found the pedestal sink on Amazon. “With this type of renovation,” she says, “we wanted to give buyers the same luxuries you’d have in a larger house, but just shrink the footprint.”

In the kitchen, she replaced the 1950s refrigerator with a Big Chill 30-inch Classic Fridge to maintain the character of the vintage appliances. She added a stone feature wall behind the range and had Adam upfit an antique writing desk to function as the kitchen island. In one corner, they installed a plate display shelf; in the nook beside the refrigerator, they created a built-in shelf out of an antique hutch.

To punch up the curb appeal, they collected antique bricks they picked up in Mount Pleasant and built stairs that lead up to the covered front porch. The exterior got a fresh coat of white paint, a new roof, and faux copper gutters that cost less and hold color longer than the real version.

The Millers listed the home in April for $284,998 and closed on the sale in June—and @OldHouseAdam, even with no return visits from serpents, had more than 1.7 million followers.